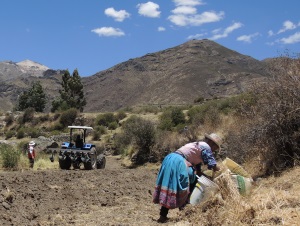 After two years’ absence, I returned to Chivay in the beginning of November with a feeling of anticipation – to seeing friends again, finding out what had changed in two years, and to be doing fieldwork again, this time as part of Overheating’s global team. When I descended the zig-zag road from the high plateau of 4000 meters above sea level and down towards the small town of Chivay, located at 3600 meters, I recognized all the surrounding nevados, literally “snow-covered mountains”, which looked like old friends. However, they were all barren, without their white ponchos of snow that used to characterize them. A commonly accepted explanation in Chivay is “global warming”, which causes glaciers to melt and seasons to destabilize. During November, the farmers were anxiously waiting for the rain, which would also bring snowfall on the mountaintops. 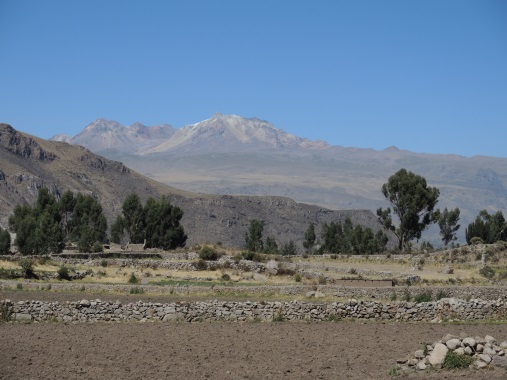 Many things have changed in Chivay, but at the same time, it feels like it have just been a couple of days since I left. I was received by my compadres who had prepared a special welcome dish of fried guinea pig. The family owns a hostel that used to be a small and cosy with some rooms around a sunny backyard. It is still cosy, but they have worked hard and “modernized”, by making a bigger construction with the help of a bank loan. They are one of a few families in Chivay who have succeeded because they have invested in tourism early on. The first tourists arrived in the 1980s, and today, the tourist industry is booming – it is calculated that 270.000 tourists have visited Colca Valley in 2013. However, it mostly benefits a few big agencies and hotels owned by foreigners and Peruvians living in the city of Arequipa or Lima. Most of Chivay’s inhabitants benefit indirectly by getting employment opportunities in hotels and restaurants, by selling traditional embroidered handicraft and souvenirs, and the owners of local hostels and shops earn money on the handful of tourist who are adventurous enough to travel on their own, without a prepaid agency tour. There is certainly a process of social mobility going on, and at the same time increasing inequalities between those who have succeeded in establishing themselves in the tourist market and/or have sons and daughters who have migrated to Lima or the USA, and those from the higher –and poorer – provinces, who have moved to Chivay and who work as day labourers in agriculture or as street sellers.

The money from the tourist ticket that foreigners have to pay to get into the Valley are mainly used to improve the roads along the Colca Canyon, where hundreds of tourists go every day to watch the flight of the condors. Moreover, the municipality of the province – with its slogan “constructing the best province of Peru” – has rebuilt the plaza to make it more attractive, with lots of references to the cultural traditions of Colca. At its inauguration, the mayor emphasized the importance of not forgetting the cultural roots of the province. While most people seem to be content with the final result of the plaza, not everyone agrees with the priorities, and several have mentioned that it would have been better to invest in the schools and a hospital.

This week, the 4 day long celebration of the Virgin of the Immaculate Conception has attracted thousands of visitors to Chivay: among them chivayeños living in Arequipa, Lima or in other countries. The fiesta involves the dancing of wititi, the traditional “love dance” around the plaza, where women and men, young and old, put on their finest pollera-skirts colourfully embroidered in the latest Colca-fashion. In addition, the municipality organized a wititi competition, where more than 20 groups participated, in order to “rescue and disseminate the cultural and artistic patrimony of the province, foster the identity and the local, national and international tourism.” 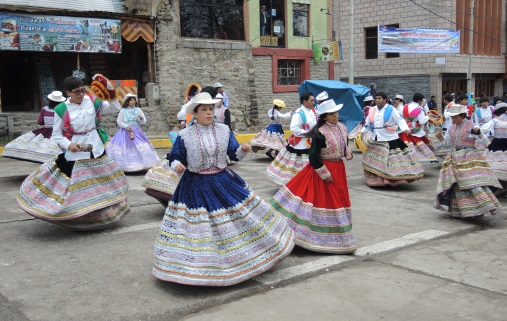 Although the cultural identity is being strongly promoted and the tourism is booming, there are other voices that raise concerns about the very basis for life in the province: water and food production. The engineer working in the Water Users Organization of Colca Valley JUVC (Junta de Usuarios Valle del Colca), who sees the farmers’ daily struggle every day, said, ”there is no growth here.” The growth seen in the mining and construction sector elsewhere in Peru cannot be noticed here in Chivay, and tourism “is only for a few.” Agriculture is still the main economic activity in Chivay, but while earlier most families produced food for their own consumption, today most of the production is for the market. However, it is getting increasingly harder to earn a living as a small-scale peasant farmer (average land holding size is 1,2 HA, and many families own just the third of a hectare); “it is not profitable”. There are several reasons for this: new climatic uncertainties, like seasonal instability, sudden frosts, and less water, in addition to low product prices and increased costs of labour. Earlier people helped each other in a form of reciprocal labour exchange called ayni, but now they hire day labourers. Hence, less people bother to sow, and many fields lie abandoned. People find other income strategies replacing or in addition to farming: shops, artisan handicraft, restaurants, tourist hostels, mines, or temporary work in the construction sector in the cities. It’s a common complaint that all that matter nowadays is money.

When I explain what my research project is about, and the Overheating project in general, people tend to relate it to food production, money and new illnesses.

“The world is “upside-down”, a woman told me, because this year it rained in the dry season, and the frost continued into (the supposed) rainy season.  She also said that “the sun seem to be closer to the earth” because the sun burns during the day, while it is freezing cold at night. Other farmers complain that they must irrigate more often because the heat make the earth dry sooner than usual. Climate change and water issues are still topics that most people are keen to talk about (as it was during my fieldwork in 2011), but I am struck by a new concern that seems to be on everybody’s mind these days: food security. When I explain what my research project is about, and the Overheating project in general, people tend to relate it to food production, money and new illnesses.

Those farmers, who continue to produce for the market, rent land from others and use a lot of chemicals, insecticide, pesticide, and “hormones” or “vitamins”, as it is called, in order to get bigger crops faster. The chemicals destroy the soil and make it unproductive for 3 or 4 years, I have been told by people who are critical to this practice and who refuse to rent their land to commercial farming. The “hormones” are mostly used on potatoes, to make them bigger and more attractive. There have also been introduced new varieties of potatoes, more standardized, based on scientific experiments in the National Institute for Agrarian Research, which have replaced the local, smaller, varieties. However, most people are getting worried about this tendency. The new big potatoes are “not natural”, they take a long time to cook, are hollow inside, and don’t taste well. The new illnesses that people are getting – like cancer – are attributed to the food people eat, and to the chemicals and hormones used in food production.

Another food-issue is about quinoa: I’ve been told that the grandparent generation didn’t know about osteoporosis, because they ate nutritious food like quinoa, which later was replaced by white rice and bread. Today, quinoa is gaining popularity again, mainly because of the international demand from Europeans and Americans who have discovered its positive health effects. As a woman said, “the scientists have found out that it is the best food in the whole world”. Therefore, the price of quinoa has soared from 3 to 18 soles per kilo. So now the problem is that most people cannot afford it very often. But what about the farmers cultivating quinoa? Do they now have the chance to get rich? The president of JUVC told me that he doesn’t trust the private institutions that are buying quinoa. They promise you 20 soles per kilo, but in the end might just pay you 5 soles, he said. The NGO Desco try to offer some hope to farmers: they finance projects of organic farming where they also help farmers to find new markets for their products, like in the capital Lima, where the boom of organic food is gaining popularity among the middle classes. But there is still a long way from Chivay to Lima, and food – which for hundreds of years has been a marker of sociocultural difference in Peru – is becoming an even stronger indicator of social inequality.