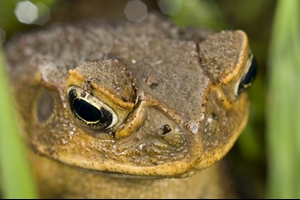 We are talking, of course, about the dreaded cane toad, the scourge of northern Australian wildlife.

The cane toad is a potent and multivocal symbol for Queenslanders. The most despised and famous invasive species to arrive and thrive in Australia since the introduction of the rabbit by the First Fleet, it came from Hawaii, where it had, in turn, also been introduced. Native to the Caribbean and Central America, the cane toad was believed to eat insects that ravaged the Queensland sugar plantations, notably the feared cane beetle. Following an experimental introduction of just a few dozen in 1935, several thousand were imported in 1937. It soon became clear that the authorities had made a big mistake. The toads disliked the environment offered by the cane fields, which provided little shelter against snakes and birds of prey. Besides, the cane beetle lived on top of the cane, and the toads would not climb unless forced to. Accordingly, they soon left the plantations in search of greener pastures. Today, the poisonous and omnivorous cane toad, which breeds prolifically and eats voraciously, has spread across Queensland and the Northern Territory, threatening endemic species, among them rare predators such as the northern quoll, whose instincts do not tell them that eating cane toads can be deadly. 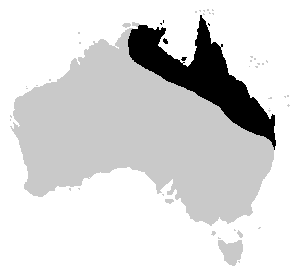 Official distribution of the cane toad in Australia. It has been documented further west, however, see Jon Rasmus Nyquist’s MA dissertation, “Making and breaking the invasive Cane Toad”, SAI 2013.

To some Australians, the story of the cane toad is a reminder that border control is essential.

The country's rather insensitive treatment of boat refugees, who are currently being interned in camps outside Australia – in Papua New Guinea, Manus and Nauru – can be connected to a long-standing concern in Australia with keeping the borders under control. For many years, this meant turning it, as far as possible, into a version of England (keep in mind that the three most populous states are called New South Wales, Queensland and Victoria); and the policy of White Australia with regard to immigration was upheld until the 1960s, and has – in the view of many, including the anthropologist Ghassan Hage ("White Australia") – never really been abandoned. The cane toad represents a disruptive alien force and can easily be co-opted by Australians who reject large-scale non-European immigration. But it also has a place in popular culture. In rugby, the Queensland team has been called "The cane toads" by fans from New South Wales, whose team is in turn called "The cockroaches". When the heat is on, that is during the annual State of Origin series in rugby, patriotic Queenslanders rarely fail to point out that cane toads eat cockroaches.

However, even an avid reader of Mary Douglas must concede that a toad may sometimes just be a toad. You don't have to be a racist, or to dislike Muslims and Indians, in order to be concerned about the disruptive impact of the cane toad on the environment. It leads, de facto, to a loss of diversity and is a threat against the unique fauna of the southern continent. Thus, the cane toad can just as well be used as a symbolic warning against flattening neoliberalism and global standardisation – it does the same to the goanna as the British did to Aboriginal cultures – as against contemporary immigration.

Attempts to control and halt the spread of the cane toad have been many.

Some naturalists have even tried to train other animals to avoid the poisonous toad, but to little avail. Chemical warfare might have been effective, but it would also have wiped out native species. The toad is more resilient and more adaptive than most of its competitors.

Across the northern parts of Australia, groups of volunteers regularly go out, armed with flashlights, rubber gloves and large bags, to collect toads. This activity, known as toadbusting, was in fact the subject of an MA dissertation at our department recently (https://www.duo.uio.no/handle/10852/36745). In my research on local responses to accelerated change, the cane toad and species invasion may seem to be peripheral concerns, but I have found a substantial local engagement relating to the toad and its impact on the environment – stronger, in fact, than the local opposition to coal and gas. This stands to reason, since most of the inhabitants of Gladstone make their living directly or indirectly from industry, shipping and mining, while the cane toad has no defenders. Even the local dogs hate that resilient amphibian.

There were toads literally wherever you pointed your flashlight, from cheeky little hoppers to pompous and self-important alpha males.

Just before dusk on a fine Tuesday evening early in January, I joined a group of volunteers and went down to the lush and beautiful Tondoon Botanic Gardens just south of the city of Gladstone, Central Queensland, in order to bust some toads. We were about fifteen altogether. Numbers are likely to increase in the next few weeks – many Australians are still on summer vacation, and the school term doesn't start until the end of the month. Some were young families, their children full of enthusiasm; some were seasoned conservationists, and yet others, such as myself joined the group for other reasons. Leaving the car park, we ventured into the darkness. I had expected the toad hunt to be focused on streams and wetland, but – and this shows the adaptiveness of this species – from the moment we left the car park, the toads began to appear on dry ground. Some were jumping across the footpath. Some were rustling among the leaves less than a metre away. Some were standing guard in front of trees. There were toads literally wherever you pointed your flashlight, from cheeky little hoppers to pompous and self-important alpha males. Luckily, the cane toad is a sluggish animal, possibly due to a dearth of natural enemies, and with a little practice, you can easily pick them up and chuck them into the sack. After an hour, we had about seven hundred. I got about fifty and slimy gloves. 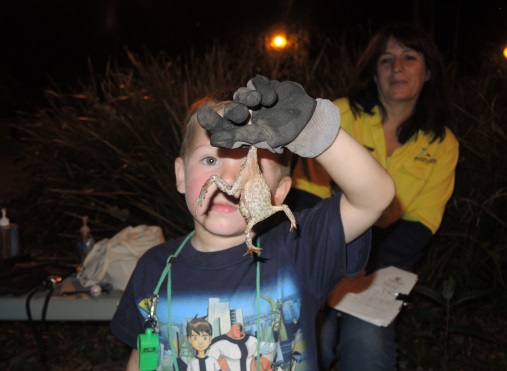 Young volunteer showing off a prize specimen from his Catch.

Why should toadbusting attract the interest of an anthropologist concerned with understanding local responses to accelerated change?

There are many possible answers to this question, and I have already suggested some. (Mind you, I returned from the botanical gardens just an hour ago, and the analysis is far from finished.)

Making and breaking the invasive Cane Toad : community engagement and interspecies entanglements in the Kimberley, Australia