Lunsar: expectations in a changing environment*

At first sight, Lunsar resembles many other towns of reasonable size (around 20.000 inhabitants) in Sierra Leone. The town, located in Marampa Chiefdom in The Northern Province of Sierra Leone, has a market place, motorbikes are transporting people, small cookeries can be found on corners, there are a couple of bars, some small shops where you can buy credit for your phone, a can of beer or a coke and two petrol stations. 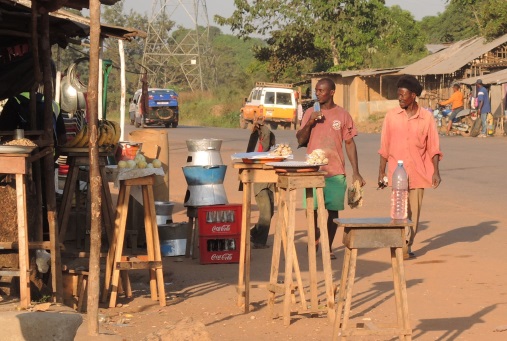 Photo: Shops along the road at the eyeclinic junction in Lunsar

However, Lunsar is not an average town. The town has a history, a history of boom and of bust. Turbulence, change, relative prosperity and crisis are conditions all known to the people inhabiting Lunsar. Presently, it all seems to come together at once, like it has happened many times in the past, nowadays Lunsar is a hot-spot again: a place characterized by accelerated change and an increased density of activities and claims. And yes, again, because Lunsar was the center of Sierra Leone´s attention before. From the early 30´s to the mid-70´s the Sierra Leone Development Company (known as Delco) developed a large-scale iron ore operation and Lunsar was considered to be an important town, attracting many different people and even opening up movement from the capital Freetown to up-country. But it was also hit hard by the closure of the mines, resulting in empty shops and jobless people, and especially by the war that took place throughout the 90´s. As one can imagine, this long lasting period of violence and destruction, caused the near-total collapse of Lunsar. Near-total, because mainly through their eye hospital, a secondary and vocational school and a general hospital, as well as various community projects, the Catholic and the Baptist missions are considered to have kept the town alive during this time of crisis.

When I visited the area again in 2003, right after the war, the town was indeed alive, but that was it. The town was breathing the suffering of the last years, houses were burned down, streets were empty and there was very little to buy. During those early years after the war, the town caught up a bit again. But, the re-opening of the mines by London Mining in 2007 really brought new hope to the area and indeed the impact has been felt. All the characteristics of Lunsar described on the top could not be seen five to ten years ago and definitely not to its current extent. Lunsar was damaged, broken down, almost a ghost town. Now there is solar street light at some places, at this very moment the roads are being rehabilitated and the promises of public electricity, water supply in the houses and even wireless internet are lying over the town (the concept of the promise should be another text, for now it is satisfactory to say that promises come with a flexible fulfillment date. Maybe tomorrow, one could say).

But, wherever there is change, there also seems to be disappointment. Many people have a job, but many more don´t. Many people experience change, but for many the change is not fast enough. Many people see new opportunities, but how to grasp and hold onto to them? How to join in the new possibilities and the promise of a better life? Perhaps even more accelerated than the change, were the expectations, because after many years of suffering the opening of the mines did bring great expectations. Expectations of employment, being able to buy a phone, a television or even a car, having more to eat or constructing concrete instead of mud block houses. And for quite a few, these expectations are met, but for many others, these expectations remain a promise of the future. Moreover, there is the legacy of Delco. ´Delco was kind to us, but now…´, is something that people, especially in the smaller communities around Lunsar, are likely to say when comparing their current situation to Lunsar of the 60´s. But perhaps memories are sweeter than reality was, for sure expectations are sweeter than reality is. It is in this vacuum, that I find myself, balancing between encountering memories, expectations and realities. How to interpret stories of sweet memories, how to deal with people´s disappointments when expectations are not met, how to explain the gap between possibility and reality? But also, how to contextualize people´s problems beyond the most obvious context? Because it would not be fair to simply refer to London Mining, or to large-scale investments in general, as a company, or an activity, that is ´not bringing (enough) development´. 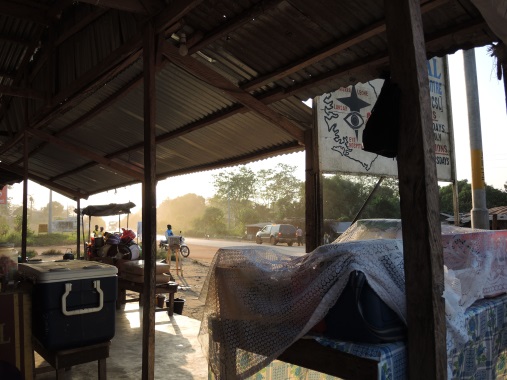 Photo: Shops along the road at the eyeclinic junction in Lunsar

Having been familiar with this area for a long time, I can confidently say that Lunsar is changing and developing positively, that the reopening of the mines was and is a great opportunity for both Lunsar as well as Sierra Leone as a whole. But, although many people are benefitting, some still suffer and the mines provide a framework of contextualizing this suffering. If you don´t understand why you have been facing problems for so long, then why not use new contexts as a framework? During the financial crisis in 2009 for example, people in the diamond mining areas in Sierra Leone referred to their difficult situation as being due to ´the global´, using this as a framework to interpret their struggles. Even though these struggles started long before the financial crisis. And if you don´t exactly know where to go with grievances, why not go to your closest neighbors?

The failure (whose failure and why is there a failure, are fair questions here) to meet expectations is a challenge people encounter, but definitely not the only challenge. ´Money speaks in Sierra Leone´, as one lady put it, is likely to be an even bigger challenge in all the varieties in which it is applicable. But perhaps this should also be a story for later.

*This text is written as a ´letter from the field´, it does not fully represent the complexity of neither Lunsar nor Sierra Leone in general and cannot be considered to be a final analysis on the issue of ´expectations´ in my field.