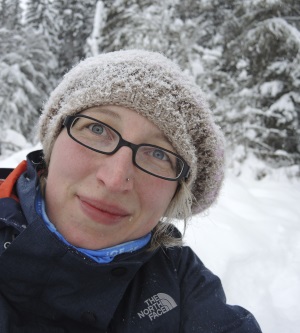 We are standing in deep dirty snow. Nights start early in winter and at 8pm the sun has gone down a long time ago. Our luggage surrounds us as a wall. We still feel warm from the effort of moving two huge suitcases, a car seat and a tired two year old to the bus stop, 1km away from our house. Bus stop, the term actually sounds misleading. There is no actually sign that tells you, this is a bus stop. Nor are there a shelter, a bench, and even any kind of waiting space. We are just standing next to a back alley, also known as the unofficial public washroom for the local drunks who hang out on Main Street, in front of one of the many liquor stores Lac La Biche has to offer. So every now and then they come and talk to us before they leave again to relieve themselves. We see some of them fighting with each other on the corner, but as soon as they see our daughter they are all very friendly and nice to us. When they hear that we are waiting for the bus to Edmonton, two of them offer us a ride if we pay the gas. They have problems standing straight so we politely decline their offer. They seem to be stuck here due to the missing gas money, but accept our decision and wish us slightly disappointed “good luck with the bus”.

Getting stuck in Lac La Biche is not as hard as it sounds. I have to add, though, that Lac La Biche is not the worst town to get stuck in, it is a beautiful, small town rich of history. But still, stuck is stuck, and in the freezing winter temperatures, often well below -30°C or -40°C, it is a serious risk if you don’t have a plan B where to stay the night if the bus doesn’t come or your car doesn’t drive anymore.

The only way to leave Lac La Biche other than by private car are the overland buses, one north bound to Fort MacMurray, the other one southbound to Edmonton. On some days they don’t show up, on some they are way too early, on most days they are late. So you have no other choice than standing in the cold and hoping for the best. The day before we waited three hours, calling all kinds of numbers to find out if the bus was in fact still coming, without any success. Information doesn’t seem to be part of the bus service.

The roads around here are tricky ones. So it is not necessarily the bus company’s fault if the bus doesn’t come through. The highways have only one lane per direction, the road conditions are especially difficult in the winter months as Northern Alberta is famous for its masses of snow and ice, wildlife, and heavy traffic due to the oil and forestry industry. Distances between towns are huge and only a single accident is needed to close an entire road.

It is not coincidentally that the reality TV show “Highway thru hell” chose Highway 63 which connects Edmonton over Lac La Biche to Fort McMurray as its new shooting place, the highway commonly referred to as “Death Highway”.

There are trains connecting southern Alberta to the north, but they closed down the passenger service some years ago and are now only used for transporting timber, chemicals, bitumen and other goods. What exactly is in the many wagons only Canadian railway knows, as it is kept secret out of safety, power, and bureaucracy reasons.

People speak kindly about the time when it was still possible to take a train ride. The talk about the egg sandwiches the conductor sold and prepared by hand for the passengers. They talk about the adventure to go north into the bush, where no roads existed and about the beauty of the nature you could see along the train tracks. For the Canadian settlers Lac La Biche was one of the frontiers, the last stop in civilization, for the local Cree, Métis, and Dene groups just one of many trading posts. Many of the older local men, native as well as non-native, have been working for the railway in the past and everyone seems to have stories about the trains. 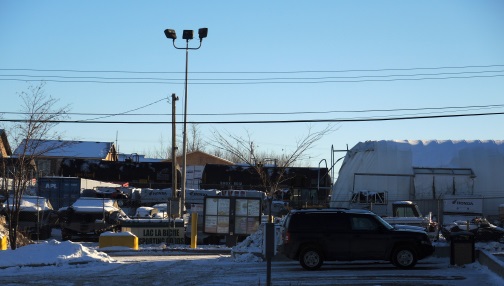 Nowadays the trains are a constant thorn in the side for the community. The train tracks separate the town in two halves. The hospital is on one side, the fire station on the other. When trains go through, these parts are sometimes inaccessible for up to forty minutes. People are afraid that help might not be able to come through when needed. Another huge concern is of course a train derailment. Especially after the horrible accident in Lac-Mégantic, Quebec, July 6th 2013, where a train loaded with crude oil derailed and in the forthcoming explosion incinerated the downtown area of Lac-Mégantic and killed 47 people. The possibility of this, as likely or unlikely as it might be, is in the minds of the people living in Lac La Biche. So the sight of trains carries for many no positive memories anymore but is connected with an unpleasant feeling of “what if…” thoughts.

But back to what happens if you get stuck in Lac La Biche and you are not local. Because if that happens, and it most likely will happen to you in winter when it is really cold and sleeping in your car/outside is not an option, then you might have a problem. As sleepy as the scenic little town of Lac La Biche seems, in the winter months it is actually a boomtown or at least very close to it. It is the very last town before the oil/tar sands. Usually, workers take up literally all the available beds. I heard stories of people going to the men’s shelter because they had to stay the night due to road conditions and all three hotels were booked out. Which of course causes another problem, as there are just limited spots available in the shelter as well, so there will be more homeless people having to stay outside for the night.

People in and around Lac La Biche seem to have adjusted to the poor infrastructure. I have never encountered more social and helpful people anywhere. When the bus didn’t show up the day before three different people offered us that they would drive us so that we could make our flight. Just out of the blue, as only one of them actually is a friend of us. And Edmonton is not exactly a short ride from here, especially not in winter. It relieved our stress a lot and made us feel very welcome and at home in this small northern town, which we haven’t lived in more than half a year.

Still, when the bus finally arrives, the waiting workers and we are all quite happy and relieved. The friendly bus driver lets us in the crowded bus, we fill the last available seats and then we are on our way on the icy road through winter wonderland towards Edmonton.

It is beautiful up here. And it is striking how visible the public poverty, speak the poor infrastructure, is so close to the source of the province’s wealth, the oil/tar sands. 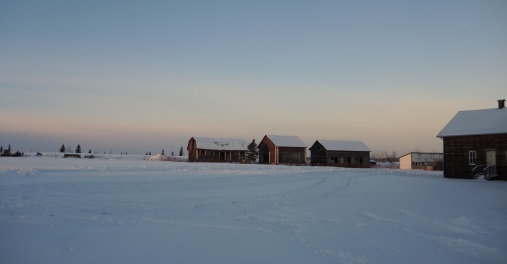