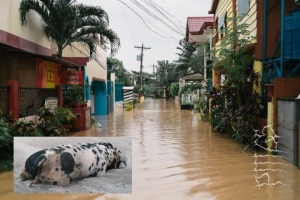 Water – my first few weeks here in Subic Bay (Philippines) have been dominated by water in its various powerful and dreadful manifestations. My family and I arrived in Olongapo in the early morning hours of September 21. During our short layover in Bangkok, I had rather anxiously eyed the path that super-Typhoon Usagi (Philippine name: Odette) was taking through Northern Luzon. The Philippines with its location on the “ring of fire” (a geological area that is particularly prone to earthquakes and volcanic eruptions), is one of the most disaster-prone countries in the world. But disasters related to severe weather phenomena have certainly increased in intensity over the last few years, with two late-season typhoons (Sendong in 2011 and Pablo in 2012) recently killing more than 2.000 people in the Philippines. Usagi, however, from the information I could find online, would probably not wreak as much havoc, with our destination, the Western part of Luzon, not listed amongst the areas to be directly affected. The normal monsoon, however, could possibly be strengthened by this weather phenomenon nearby, I read. What that actually meant I was not quite sure, but it did not sound all too threatening – so reassured, we boarded our plane.

After a somewhat rough flight, we landed safely in Clark – the old U.S. air base that in the meantime has been converted into a Special Economic Zone and a commercial civilian airport, which nowadays functions as a hub for low-cost regional airlines. In order to get to Subic, our final destination, we would need to take the Subic-Clark-Tarlac Expressway (SCTEX), the country’s longest and most modern expressway that was only opened to the public in 2008. Meant to further enhance the attractiveness of the larger Subic-Clark region to foreign direct investors, the SCTEX was deserted at 1am when we entered it. After a one-hour-long drive through the night, past an entirely rural landscape, we reached the Subic Freeport Zone (colloquially known as the SBMA). This Special Economic Zone, which also grew out of an abandoned U.S. military installation, looked like a massive U.S. suburb from what we could make out in the dark. In addition to housing a number of industrial sites and tourist spots, this area functions as a kind of gated community for rich Filipinos and foreigners, who want to enjoy the benefits of a Western lifestyle in the midst of the Philippines. A huge U.S. Navy ship was currently hanging in the port nearby, reminding me of the fact that even though the U.S. officially has given up its bases in the Philippines, its soldiers and sailors are still making many visits and port calls in this area.

The next morning, we woke up in the small coastal village outside of Olongapo that we would be living in for the next eight months. Foreigners in this part of the Bay area, especially during the rainy season, usually come in one shape, and one shape only: white, male, and unaccompanied. There is a relatively large red light district nearby, a remnant of the “good ol’ times” when the adult entertainment business catering to the U.S. military was amongst the biggest sources of income for the local community. Those US sailors who may still make their way into this entertainment area are nowadays outnumbered by civilian foreigners also on the hunt for female companionship. During my first walk on the beach, however, it was not these male tourists that interested me, but rather what lay further away, behind the water: the large shipyard on the other side of the bay, a majestic infrastructure shining and glistening in the misty air. In length, it had to be about as big as the 500-meter-stretch of sandy beach that was in front of me – without a doubt the crown jewels of foreign direct investment made in the SBMA. 15.000 people currently work there, making this Korean owned facility the biggest single employer in the Subic Bay area.

So in Subic Bay we had arrived. As the local saying goes: Bahala na - come what may.

And what came then - well, it came at us within the next 12 hours already. The rain. The rain that kept pounding down mercilessly. At first it felt like a lot of rain. Then it felt like an obscene amount of rain. And then it rained even more. It rained so much that you could feel it reverberate in every bone of your body, the incessant, violent drumming on the roof shaking you to the very core. Every hour, the electricity would disappear, and after a few minutes, the aircon would come back to life. Until it all died for good and we found ourselves in total darkness. We barely slept – too much thunder, too much lightning, too much noise. When I woke up again, it was 10 in the morning. I opened the curtains of our hotel room on the 2nd floor, and saw that we were entirely flooded in, and that people were wading through water that stood above their knees where the day before a street had still been. No electricity, of course, and no running water, but we still had a lot of drinking water left, and gas to cook with. 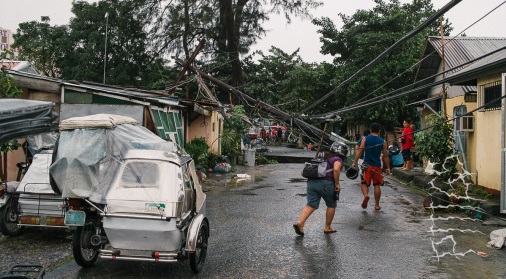 After two days of being locked in by the water in such a way, we could leave our temporary home again for the first time. We walked around looking at the severe damage done – some parts of the beachfront were practically gone, with large craters falling deep where huts and bungalows had stood before. The last section of the main road that leads out of our “barangay” (village) and towards the other communities nearby was gone, just a hole left in its place, and a thin line of concrete on one side that was broad enough for one person to balance herself across with some skill and determination.

The situation in Olongapo City, we learned, was much worse, with the city affected by the most severe flooding in its history. Nearby Subic Town, the site where many of my potential informants working at the shipyard are living, was in the midst of a catastrophe. Over 20 casualties had been confirmed, mostly young children from squatter families living in the remoter villages of Subic, whose makeshift houses, built closely to the mountains, were flattened by the flashfloods that the rains had brought along. Subic Town, originally a small fishing community, has doubled in size over the last 10 years due to the shipbuilding industries that have moved in here, and as a consequence of this rapid growth, the town seems to be ailing from more infrastructural problems than other parts of the Bay area.

In the meantime, after the water has receded and most of the mud and rubble has been cleared away, another, more insidious aftereffect of the flooding has come to light in Olongapo: over 500 people are currently being treated for leptospirosis and ten persons have already perished from the disease, because they came into contact with rat urine while wading through the contaminated flood water. Every day, more than 50 people die in the Philippines from water-borne diseases that could be eradicated if the sewage system was improved. In Olongapo, where untreated sewage is often directly led into rivers and streams, the ground water is so polluted that ingesting it poses a serious health risk. Whoever can afford it will therefore buy purified water for their families instead. I was surprised to learn, however, that the purified water sold at numerous water stations by the main highway (for the equivalent of 50 Eurocents per 5-gallon canister) still contains so many pollutants that it is not recommended for very young children. After our toddler was suffering from mild, but consistent bouts of diarrhea over the span of two weeks, a nurse from Olongapo told us to buy the most expensive brand of mineral water, which is what they give to children at the hospital she worked at. Even the regular bottled water that can be purchased at the stores would not be of the quality you want to give to your child, she insisted. This mineral water, I calculated, will cost us something like 7 Euros per 5 gallons – which makes it practically unaffordable to the vast majority of people living in the Subic Bay area. Tellingly, the only places that I have seen where they do in fact sell this brand of water in 5-gallon canisters are located within the secluded and rich SBMA. Its most privileged residents, usually living comfortably on the heights of Binictican, are naturally also more protected from floods that the less affluent people living in the low-lying areas between Olongapo and Subic Town. Clearly, one’s exposure to water (in its various manifestations) heavily depends on the kind of income one has – it is, if you will, a marker of class in this deeply fragmented community.

Elisabeth Schober is writing from Subic Bay the Philippines, where she is investigating the loss of jobs at a South Korean shipyard and the simultaneous rapid expansion of a second manufacturing site at Subic Bay.

Read more about the project