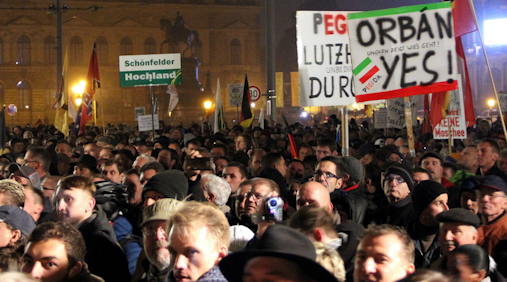 In one situation, the 53-year-old supporter of the populist right-wing party UKIP expresses that Polish labor migrants pose a threat to English livelihoods and that “we need to wrap ourselves in the flag of St. George”, which is often associated with racism. In another situation, walking into a store downtown, he greets the Sikh owner respectfully and emphasizes his good relations with the Sikh community.

In the course of her fieldwork among supporters of populist right-wing parties such as the UKIP in England and Jobbik in Hungary, anthropologist Cathrine Thorleifsson met many such people. People whose behavior suggests that the picture about “racists” and “right-wing extremists” is not as black and white as it appears in standard news coverage.

Attitudes towards “others” depend on the context. It is not unusual that one and the same person can be racist in one situation and cosmopolitan in another.

If one wants to do something about the growing polarisation around issues of identity and migration, it might be helpful to start with this insight, Thorleifsson assumes. “It is important”, she says, “not to essentialise supporters of populist right-wing parties. We have to try to understand the reasons for their attitudes better.”

Fieldwork in England and Hungary

The Overheating researcher has spent several months among supporters of radical nationalist parties in England and Hungary.

In England, she conducted fieldwork in Doncaster, a former industrial town now in decline where the UKIP has become the second-largest political party, garnering 24 percent of the votes. In Hungary, she divided her time between the capital of Budapest and the border town of Ózd, which is used as a laboratory for Jobbik governance.

In Budapest, the anthropologist gained access to the inner circles of Jobbik, a radical right-wing party that has become known not only for its stance against immigrants, Jews, and Roma but also for erecting a statue to Hitler’s ally Miklós Horthy.

After the recent election in April 2015, Jobbik has become the third-largest party in the Hungarian parliament, securing 20.5 percent of the votes.

“In the case of the UKIP supporter, there was a difference in attitude towards the “old-timers”, immigrants from the former colonies who came in the 1970s, and the “newcomers”—those migrating as the result of EU enlargements”, she explains.

Several other UKIP and Jobbik supporters are promoting exclusionary ethno-nationalism and nurturing ties or imaginaries of places outside the country’s border at the same time.

One example is the 28-year-old Jobbik mayor of Ózd, David Janiczak.

"He proudly showed me souvenirs from China in his office, painted in Jobbik colours, while he had just twinned the old steel-town of Ózd with a Chinese town”, Thorleifsson says.

The Jobbik mayor was even able to combine his anti-immigrant-sentiments with environmentalism and promoted the use of solar energy and windmills.

The anthropologist learned that many people in Doncaster might be okay and even positive about places and populations changing rapidly, as long as these changes are not perceived as threatening their status, welfare, and lifestyle.

The overheating of identity politics seems to have a lot to do with such (perceived) threats.

“Overheating in my field sites is related to a cooling down of the economy and the threat and actuality of demographic change,” the anthropologist says.

"In relation to the economy, people are very protective. ‘The immigrants are stealing our jobs’ or ‘We are still unemployed; we can’t afford housing while the newcomers get all state benefits’ are common complaints”, she explains.

In order to deal with their fears, people engage in what Thorleifsson calls “self-heating activities”.

Anthropologist Iris Jean-Klein introduced the concept of “self-nationalization” as a strategy of resistance in the context of the Second Intifada: You become “more Palestinian” in order to secure your rights. “I think you can also call it self-heating practices”, Thorleifsson suggests.

“Self-heating”, she explains, “is a useful concept, as it gives agency back to ordinary people. People are no passive consumers of radical nationalist ideologies. We all engage with certain myths in order to make the best out of our lives."

Xenophobia or racism, in her opinion, can be seen as a strategy of resistance – and in the case of Doncaster and Ózd, as “a response to a longtime disillusionment with a future that never came.”

Feelings of powerlessness and disillusionment are widespread in both Doncaster and Ózd. Both cities are struggling with failed transitions: Ózd from communism to a market economy, and Doncaster from industrialism to post-industrialism. In both places, unemployment is high.

“Overheating in my field sites has less to do with the economic crisis in 2008, but more with transition in general”, she says.

In the early 1980s, Doncaster was synonymous with the coal and mining industry. A few years later, it went from boom to bust as a pit-closure program went into full swing under the Thatcher government. During Thorleifsson’s fieldwork, Doncaster’s Hatfield Colliery, England’s last-remaining deep-coal mine, closed one year prematurely, putting 400 people out of work.

“Nostalgia for the mines and the industrial past is quite strong there. One of my informants had tattooed a miner’s lamp at his neck”, she says. “People have lost a key source of pride and identity. Nationalism can thus fill that void.”

Nostalgia about “the golden past” is alive and kicking in Hungary as well. It is nostalgia with a neo-fascist touch, according to Thorleifsson.

“Jobbik (Movement for a Better Future) promises a future based on past myths and a ‘national rebirth’. They use a rhetoric that is very much in tune with the way Roger Griffin defines fascism”, she explains.

Hungary’s turn to the far right might also have to do with the way nationhood is perceived in this country, and whether diversity within a nation is tolerated or not, the anthropologist suggests.

“Hungary has much less experience with migration and diversification processes than, for example, Germany", she says.

"In contrast to Germany, Hungary never had a national confrontation with the atrocities that they committed on Jewish and Roma minorities during the Holocaust. I believe that is why old hatreds and conspiratorial thinking can be applied in response to a new crisis, such as the refugee situation”, she explains.

A 36-year-old Jobbik supporter she interviewed had never met a Muslim refugee but believed that the displaced Syrians were “the biological weapon of the Jews”.

“Here one sees a mix of old and new hatreds, combining old anti-Semitism with Islamophobia”, she explains.

“Initially, I had an argument that xenophobia can more easily thrive in a country that is less diverse, but I haven’t decided yet if that is the right argument due to what we now see in Germany with Pegida’s anti-Islam protests getting stronger and stronger. I’ll have to think that through a bit more”, she admits.

In order to cool down the situation, both a more generous definition of the nation and policies that reduce inequality are needed, the anthropologist believes.

“To convince radical nationalists of a more inclusionary definition of the nation might seem to be an impossible task”, she says. “But I believe through a better knowledge about how accelerated change is affecting local life-worlds and through detecting contradictions in everyday life, one can find common ground for discussions that challenge exclusionary definitions of nationhood.”

Cathrine Thorleifsson: From Coal to UKIP: the struggle over identity in postindustrial Doncaster (Overheating, 9.6.15)