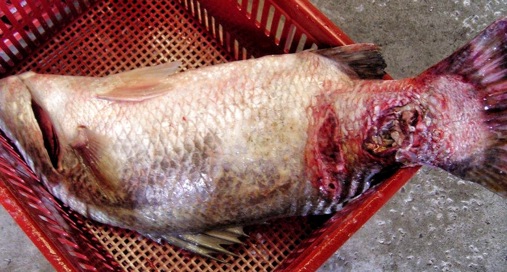 Why all those dying fish? Because of a recent flooding or industrial activities? Photo: Greens MPs, flickr

The anthropologist has recently returned from four months of fieldwork in the industrial town of Gladstone in Australia where he studied the conflicts between economic growth and sustainability. There he stumbled upon an environmental scandal that not only led to ecological devastation in the harbor area and took local fishermen out of business, but also raised questions about the functioning of the Australian democracy.

“A story which is often told concerns big money walking over people, not taking responsibility for their wellbeing unless they’re forced to. The system is broken, and it needs to be fixed, some people told me during my fieldwork,” the Overheating research director told the participants of the second international workshop “Knowledge and Power” by the Overheating project.

It all started in 2010 when authorities in Gladstone thought their harbor, at that time already one of the largest coal harbors in the world, should be expanded to be more profitable.

"Perhaps partly because of anxieties over climate change, the price of coal has been in decline. In Australia, a response to this situation has been to increase the production of this top contributor to climate change. In central Queensland they are about to open some of the largest coal mines in the world and are currently building a new coal terminal in Gladstone. At the same time they have built three large Liquid Natural Gas (LNG) terminals on Curtis Island near the city," Thomas Hylland Eriksen explained. 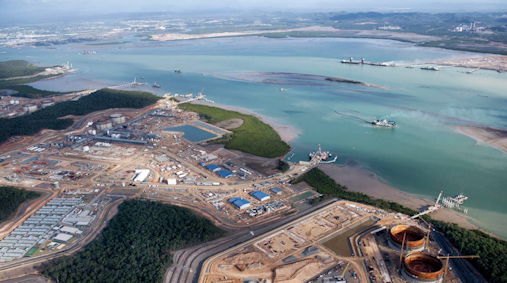 In order to better connect these terminals with their markets in Japan and China, a deeper harbor basin was needed. More than 25 million cubic meters of muddy dredge had to be removed from the seafloor. They dumped most of this partly highly polluted toxic mass in perilous proximity to the Great Barrier Reef, most of it within a built enclosure called a bund wall and the rest off the coast.

The Gladstone Ports Corporation (GPC) in charge of the dredging assured everyone that the operation was environmentally sound.

Why all those dead and sick fish?

The scandal started to take form soon after some of the dredge spoil had been disposed of in the designated areas in the ocean. Many people noted sudden changes in the environment. A woman who was walking with her dogs around the harbor was shocked to see five large dead fish lying on the shore. Reports about sick and dead fish and shell disease among mudcrabs became common. Soon the authorities imposed a three-week fishing ban in the harbor. The market for seafood from Gladstone, in the words of one fisherman, “just disappeared overnight.”

Environmentalists, fishermen, journalists, bloggers and scientists concluded that the dredging had ecological side-effects which had not been acknowledged by the Gladstone Ports Corporation. “You can’t expect that you can dredge up 40 years of toxic waste from the harbor with no effects on the sea life,” one said. They also pointed to aerial photos that clearly showed that the bund wall, which was supposed to be water tight, actually was leaking, allowing polluted water to enter the sea.

But the authorities and the Ports Corporation insisted that nothing was wrong. The bund wall was safe and sealed, they said, and the minor leakage would eventually stop.

They referred to reports from a local research institute that they had hired to monitor the water quality. Their view was that the proportion of chemicals and dissolved metals was well within established limits. The common view was that it was not the dredging but a recent flooding that killed the fish. 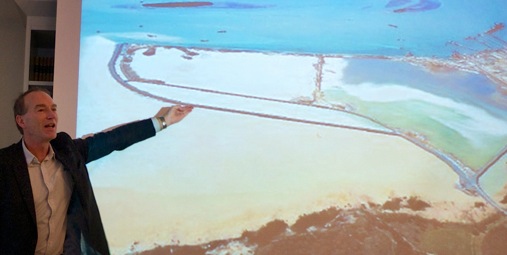 Thomas Hylland Eriksen: "It is easy to see that the bund wall was leaking." Photo: Lorenz Khazaleh

A group of fishermen, who were convinced that the dredging was guilty of taking them out of business, formed the Gladstone Fishing Research Fund in order to prove their case and demand compensation. They hired researcher Matt Landos to write a report for them. His findings indicated that massive toxic algae bloom compounded by lead and other dissolved metals (triggered by dredging) was the main explanation for the high prevalence of disease in fish and crabs.

The authorities rejected his results and described his research as “flawed.”

It was after whistleblowers appeared in the media that the authorities started to act. Engineers who were involved in building the bund wall admitted that the GPC, in a bid to save time and money, had settled for an inferior geotextile sealing on the bund wall, so it soon became leaky.

Still, many questions remain to be answered: Who, for example, knew about the leaking bund wall and did not tell the public? “There is a feeling among people in Gladstone that we might never get to the bottom of this,” Thomas Hylland Eriksen said.

Similar scandals where “big money is running over people” happen all over the world. What can be done about it?

Thomas Hylland Eriksen thinks questions like “Who pays for your research?” and “Who benefits from a particular version of reality?” should be raised time and again in order to get a better vantage-point for evaluating and acting upon the “overheated world.”

“Since the start of the dredging, opposing knowledge regimes have competed for legitimate truth claims. These truth claims are all compounded by political and economic interests,” he explains.

People in Gladstone, for example, are dependent on the industry, which makes it difficult to criticize it. Some, therefore, got very angry at the fishermens’ fight against dredging. Their activism gave Gladstone negative publicity, they argued. Others claimed the fishermen “just want to get a lot of money in so called compensation".

“It might be as one of my informants said to me: If you want to understand why people believe what they believe, you have to follow the money. Matt Landos was paid by the fishermen to make his report. The research institute was paid by the GPC to do their water monitoring, and there are rumours about million-dollar payments. The maxim ‘follow the money’ is no less relevant for research than for other activities,” he says. This, he thinks, also reflects a general problem of externally financed research, that has become commonplace in universities and institutes around the world.

“People may say ‘I still trust science, but I don’t necessarily trust scientists’,” he said.

The importance of whistleblowers

A sense of general suspicion has been pervading everyday life. 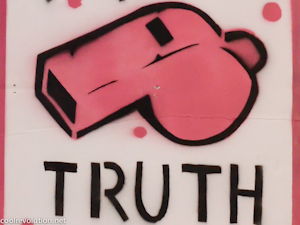 “Reading the local newspaper, which does an excellent job in reporting from local events, you nevertheless sometimes have to read between the lines, and you may naively ask: What is the hidden agenda, is the industry threatening to take the newspaper to court, is this why the paper has to phrase things this way? There is a great deal of uncertainty, ” the researcher explained.

The CEO of the Ports Corporation was known for his impatience with critics, including local journalists. On several occasions in the past, he had threatened to take the local newspaper to court for libel. For the building of the new terminals on Curtis Island was a $60 billion investment, and dredging in the harbor was crucial for it to come about.

In this situation, with a total lack of independent actors, whistleblowers can play a crucial role. They don’t fit into the “follow the money” model they come across, and in the eyes of many they seem more credible than others, and in this case they forced the authorities to act.

In this situation, when some complain that “the system is broken and needs to be fixed,” a certain responsibility also lies on scientists, according to Thomas Hylland Eriksen:

"Transparency and independence of scientific advisors to government are crucial. When political decisions are not based on sound research and relevant knowledge, it is up to activists, journalists and researchers like us to expose the gap between different knowledge regimes and reality.”

Growth vs sustainability: Thomas Hylland Eriksen off to explore one of today’s main contradictions

Interview about his fieldwork: Crisis? What crisis?