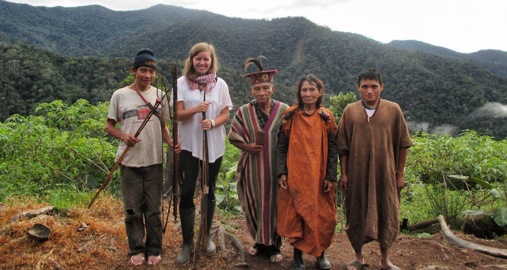 Fieldwork in an isolated area with no roads, no water and no electricity: Margrethe Steinert in Alto Purus. Photo: Privat

There is an oil and gas boom in the Peruvian jungle. More than 70 percent of the land in Peru’s Amazon rainforest has been granted to companies for exploring and drilling for oil. To increase this number even more, the government recently lifted environmental restrictions and stripped the Ministry of Environment of power.

After two decades of pro-mining policies and free-trade agreements, Peru is regularly praised by institutions like the World Bank for its policies to court foreign capital. The people living in the jungle, many of them indigenous subsistence farmers, do not necessarily share their enthusiasm.

– There is a struggle against the state going on in the jungle, says Margrethe Steinert. 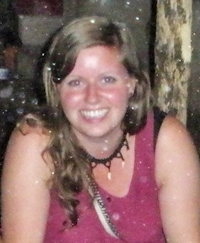 Margrethe Steinert: "My family and friends thought I would be crazy to do fieldwork where there are snakes, bears, jaguars, and huge boas."

The master student in social anthropology from the University of Oslo, has just walked for about one hour down from the community San Miguel in the mountain jungle, down to the closest city in order to access the internet and to conduct this interview.

For six months she has lived with several families in two communities in the jungle in order to learn how the indigenous people of the Asháninka deal with the changes that recent developments in Peru’s booming economy have triggered.

Wishing “progress” for their children’s sake

For life is not the same since Peru started focusing more and more on extracting oil and gas. More people are entering the territory that indigenous groups regard as theirs and search for precious resources in the ground. Mining companies are approaching indigenous groups and offer to build schools, provide access to water and electricity if they get their consent to extract resources on their ground.

These are offers that many indigenous communities easily say yes to, also communities close to San Miguel.

The closest mining site is only 10 km away.

– Most of the Asháninka that I talked to welcome electricity, schools and water. Foreign companies are their hope as they feel that they don’t get any help from local authorities to develop the area, she says.

– They are hoping for what they call progress and development especially for their children’s sake. They wish their children will be able to enjoy a life with less hardship than they have experienced, although they know that they will be losing some of their traditions on their way.

But maybe some of the communities have said yes too easily, she wonders. The so-called development has a high price, she learned.

– People are complaining that the mining company is polluting the river. They can no longer use the river as a source for food as they get sick from eating its fish. They feel limited in the space they live in, because it is now controlled by oil- and mining companies and land invaders. They feel that their livelihood is under threat. 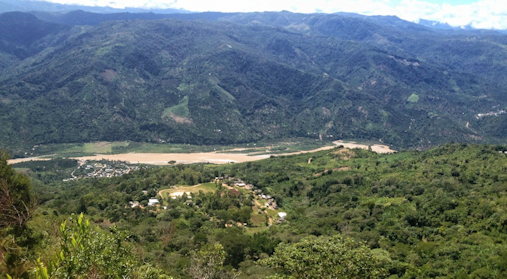 750 m high up in the jungle: The community of San Miguel.

A tough fight for property rights

As a reaction to industrialisation and urbanisation, several families decided to move to a place further into the jungle, called Purus. The son of one of the founding fathers of their community is the village chief there.

The chief, who has lived there for five years, is currently fighting for the property rights of 6500 hectares they claim to be theirs by ancestral right.

Margrethe Steinert has travelled to this place and stayed there for one month. She returned just a few days ago.

– It is a very isolated area with no roads, no water and no electricity. People living there are very poor with limited possibilities for any income surplus or income at all, she says.

– The forest is almost untouched by human hand, except for the few chakras (agricultural fields) here and there. I can’t imagine there are many places left like Puruz in Peru, that haven’t been invaded by migrants, oil- or mining companies yet. The chief told me that several oil companies have been interested in excavating here but the community has refused.

The fight for the property rights is a tough one. It has been going on for several years.

– In Peru it is not possible to claim land and say this is the land that our ancestors used 2000 years ago. And the local municipality and the Ministry of Agriculture don’t help the indigenous people to claim their land as they have their own interests in this territory, Steinert says.

This fight for their land is also dangerous. Four Asháninka-leaders were recently murdered in a remote region bordering Brazil, allegedly by loggers. One of the leaders, Edwin Chota, had received frequent death threats from illegal loggers, whom he had tried to expel from the lands for which his community was seeking title. 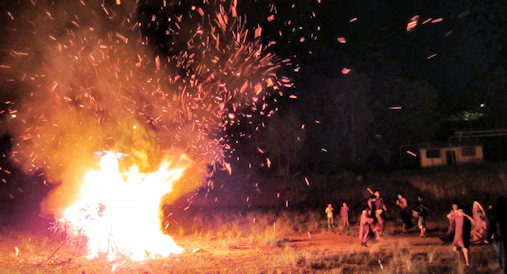 Occasionally, especially when tourists are visiting San Miguel, the Ashaninka like to have bonfire parties where they dress up in cushma - the traditional clothing - and dance around the fire. The fire symbolizes the Ashaninka god. Photo: Margrethe Steinert

There are different views about how to best secure the future of their communities.

– Some of the elders are concerned about the influence that the city has on the younger people with all its technology, Facebook and so on. They built a secondary school in their community, so that their kids don’t need to go down to the city. In their school they can teach them the Asháninka language and customs, something which children cannot learn in the city. For them, in these times of change, it is important to maintain their way of life and their customs.

Others are open to influences from the outside. They argue that cultural exchange with a limited number of foreign visitors can be a way to preserve their cultural heritage. Relating to a different life world make them more aware of their own. They have developed a kind of eco-cultural tourism, the anthropologist explains:

– If you visit other communities, people would dress up, paint their face red, dance and play music. They are presenting a show. But in San Miguel, visitors would stay with a family, work and go visiting friends and family with them. They learn about the Asháninka’s way of life. In exchange, visitors are supposed to do something for the community like teaching them English. They call it “tourismo vivencial” - living tourism. 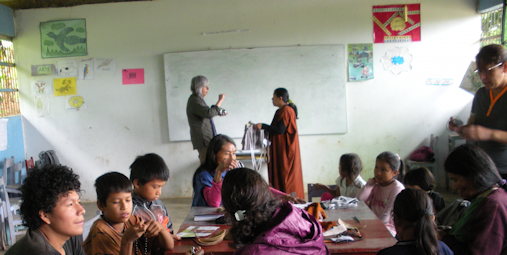 Community members of San Miguel participate in a class to improve their handicraft - a project supported by the local authorities - for the purpose of  maintaining cultural tradition and make sellable souvenirs to visiting tourists. Photo: Margrethe Steinert

Now, at the end of the fieldwork, she feels there is still a lot to do.

– I would love to stay here a couple of months more and spend more time especially with the mining and oil companies to hear more about their work. I also would like to go to one of the communities that have accepted oil extraction on their land. I also would like to know more about the way people do agriculture and how they systemize the different plants, she says enthusiastically.

Margrethe Steinert did not end up there by accident. Her father, the sociologist Ole Steinert, did his doctorate in the same community in San Miguel twelve years ago.

– My father died in 2009. After his death I felt that I really wanted to go back to the community to see how things have changed there, she explains.

– In the beginning of my fieldwork I had some issues with being the daughter of my father because they knew my father well and talked a lot about him, but that also meant that I gained their trust more easily.

Going on fieldwork has been a special experience.

– I think I pushed my limits here. My family and friends thought I would be crazy to do fieldwork where there are dangerous animals like snakes, bears, jaguars, and huge boas. But I like to push my own boundaries.