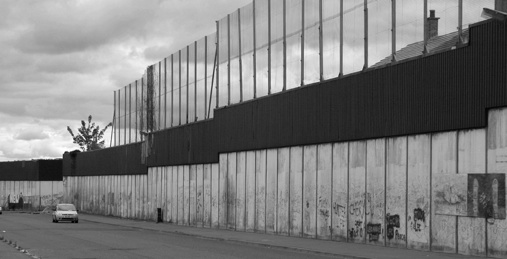 Northern Ireland: Walls were built to separate Protestant and Catholic communities: “When you look at the murderous effects of divisive identity politics, then it is incumbent on anthropologists to say ‘Look there are actually other positions there’," says Jeremy MacClancy Photo: Still Burning, flickr

Studies on identity, especially on ethnic and religious identity, have been quite a popular activity within the field of anthropology in recent decades.

In MacClancy’s view, many of these studies - including some of his own – have been fundamentally misdirected. By privileging some voices over others, anthropologists of identity have tended to present a distorted picture of how humans relate to one another - a picture where identity-based conflicts and differences occupy most of the space, largely marginalising all those people who just want to live in peace and stay away from confrontations. 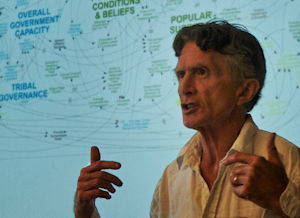 Jeremy MacClancy: "Most people are not much interested in identity politics. They wish to connect, not to divide.” Photo: Lorenz Khazaleh

“In the midths of studying identity,” the anthropologist from Oxford Brookes University said, “something is being lost. We forget that most people are not much interested in identity politics. Indeed, the very opposite is true: Most people strive daily to uphold equality, commonality, and a notion of humanity which usually tends towards the universal. They wish to connect, not to divide.”

But this commonality is not always as easy to spot as flag-waving activists who proclaim their identity, be it Norwegians, Islamists, Protestants, Israeli or Palestinian.

This is particularly true if you don’t explicitly look for it.

Recently, one of MacClancy’s students, Matthew Gault, has returned from his fieldwork in Fermanagh, the most southwestern county of Northern Ireland, a region famous for its violent conflicts between Protestants and Catholics.

But Gault uncovered more contact and cooperation between both sides than what is usually perceived. A very significant number of locals, from either religious camp, shy away from identification with one side or the other. In some cases, there was actually more division between members of different Protestant denominations than between them and Catholics.

“Despite past avowals to the contrary, many people did maintain relationships with those ‘on the other side’: they just tended to keep quiet about them,” MacClancy stressed.

“The overall picture I gain from Gault’s work is of a county whose occupants desire to stress mutual acceptance and the ability to work together, over antagonistic division based on whatever mode of identity.”

Not all of them cooperate with one another out of sheer kindness, though. While some refer to doctrines of Christianity which are so fundamental that they override sectarian division (“Love thy neighbour”), others explain their behavior in instrumental terms: For small farmers to survive, for example, certain agricultural tasks require their neighbours’ assistance.

But his point remains: “Although it often appears that there is no common ground between opposing groups, usually there is.”

MacClancy made similar observations several times during his own career as an anthropologist, for instance while he was on fieldwork in Pamplona to study Basque identity in 1984 and 1985.

At that time Pamplona was a place marked by seemingly deep divisions and dedicated nationalist activism.

“I was very taken aback to learn later how many of those I met did not support radical nationalism, but were critical of it. Instead they stressed the need for convivencia: peaceful coexistence based on the tacit acceptance of difference.”

MacClancy, a post-doc student at that time, went there deliberately to study identity conflict issues.

In retrospect he knows that he set off on the wrong foot. A better approach for studies of identity, he thinks now, would be to start with commonality, to study how people connect with each other - and then, and only then, to see which identities begin to emerge, how, why, and in which contexts.

It might be tempting to dismiss MacClancy’s arguments as too idealistic. “The picture you’re giving us is much too simple”, he was criticized after his presentation.

“I am not trying to set up an insurmountable opposition between commonality and identity”, he replied. “Commonality is not universal. After all, it is well established that some peoples around the globe define humanity as “us”, which means themselves, and all others as non-humans or less than fully human.”

“What I am arguing is that fieldworkers should expect to find commonality rather than not. Even when you go into an area with a very strong sense of identity, there will be a signifant number of people who stand aside and have different views on things. This diversity of viewpoints is not sufficiently represented in studies on identity", he explains.

"I contend that an open-ended commonality is more the norm than a virulent sense of identity. Fieldworkers who forget that do so to their own detriment.”

"Look, there are actually other positions out there"

This shift in perspective from divisions to commonalities may not only have a radical effect on the way anthropologists of Europe do fieldwork and write their ethnographies, he explains:

“Imagine, for example, a fieldtrip to the Basque Country which did not immediately focus on nationalist or anti-nationalist issues, but which commenced from people’s associative networks: who spent time with whom, how, why, when; how welcoming were they to others, and on what grounds”, he says - and adds:

“When you look at the murderous effects and the socio-economic consequences of divisive identity politics, then it is incumbent on anthropologists to say ‘Look there are actually other positions there’.”