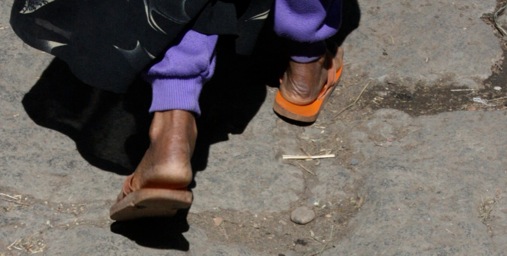 Flip-flops: the highest selling shoe and the first step many people take from being barefoot. Photo: Michael Tan

The woman, who is sinking up to her knees in rubbish in the middle of the huge landfill in the outskirts of Addis Ababa, is not one of the hundreds of scavengers who are searching for things they can use or eat like old airline food and plastic bottles.

The woman is a sociologist.

She has travelled all the way from London to this giant, murky, grey-brown raised area of partially decomposed rubbish. For her, it is the end of a long journey that started several years ago in the world's second largest oil field in Kuwait.

On Monday, 3.11.2014 she will be in Oslo and present her research in the Overheating-seminar. 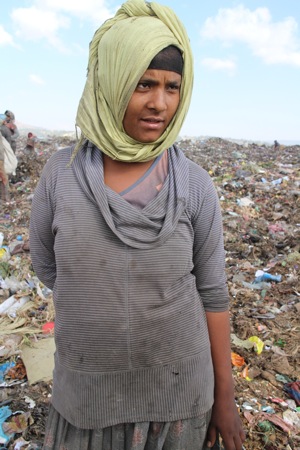 End of the trail: among rubbish ‘scratchers’ at the giant landfill site, Koshe, on the southern edge of Addis Ababa. Photo: Michael Tan

From Kuwait to Ethiopia

For seven years, sociologist Caroline Knowles has been following a pair of flip-flops around the world. From its birth in Kuwaiti oil, the flip-flops led her via the petrochemical factories in South Korea to the flip-flop workers in the plastic city of Fuzhou in China.

Then the plastic shoes sent the researcher to the border between Somaliland and Ethiopia where flip-flops are smuggled in fast cars and on camels hidden under bundles of wood to one of the largest emergent flip-flop-markets: Ethiopia. In this poor country, of course, the demand for cheap shoes is high. Avoiding paying customs duty, smuggling makes them even cheaper.

On the landfill in the outskirts of Addis Ababa, the lives of many flip-flops find their definite end. Unlike plastic bottles, flip-flops have no recycling value.

Made by migrant workers

By studying flip-flops, the researcher from Goldsmiths in London argues, we can learn about the interconnectedness in our world: Even a simple plastic shoe that only consists of two parts, leaves a global trail.

Studying flip-flops means studying the "backroads of globalisation" in Asia and Africa: Flip-flops are made by migrants. In order to produce the worlds' simplest shoe, workers are travelling thousands of kilometers and have to spend weeks and months separated from their families, often in precarious conditions.

"The men who drill the oil in Kuwait get bussed to the oil fields, they work for one month or two, 12 hours a day, then they are bussed back to the airport and flown home for a month: to India, Egypt or war-torn Syria. Their status as guestworkers does not give them any rights in Kuwait", Knowles explains.

The flip-flop-migrants in China are part of the largest peacetime movement of people in history. Since the 1980s hundred million people have left the countryside, fuelling the growth of the cities in China's east.

"Factory owners prefer migrants. Migrants are much more willing to work, and work harder, they think", the sociologist explains.

Where do ordinary everyday objects come from?

Results of her research are her recently published book Flip-Flop: A Journey Through Globalisation’s Backroads, several articles, and blog posts.

She also set up the website flipfloptrail.com that is especially targeted at school students:

"The idea", she explains, "is to get people to think about where ordinary everyday objects come from, and make those inquiries in their own life. I give talks to kids as young as eight using the website, and that seems to work."

During the Overheating seminar the sociologist will also give an inside view into the research process. Researching the flip-flop-trail across continents was far from easy.

"It's not just research into mobility but mobile research: You never know where you're going, you're never really in control of the route because you have to follow the object", she says.

Her biggest problem was access to the research sites.

"The workers were very kind and more than willing to share their world with me. They took me to their homes where I met their wives and children. The hard part was to get permission from the companies to access factories to talk to the workers", Knowles explains. 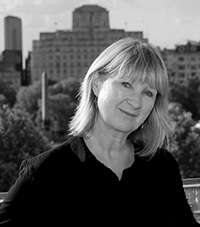 Caroline Knowles: "There were lots of moments when I felt very lost, not knowing what to do next, doubting whether I could do the whole project." Photo: flipfloptrail.com

She faced the same problems as many other researchers who have been "studying up":

"Companies generally don't want researchers nosing around. I had to persuade them that I wasn't an environmental activist, that I was simply interested in the extraction of oil and its use in plastic, that I was documenting rather than criticizing", she says.

Kicked out of the factory

Once, shortly after she managed to enter with the help of a former Goldsmiths student who speaks Mandarin (Michael Tan), she was kicked out of the factory.

"The boss got anxious. He wondered what I was going to do with the information", she explains.

"There were lots of moments when I felt very lost, not knowing what to do next, doubting whether I could do the whole project", she confesses.

One such moment was when she was standing outside a petrochemical factory in South Korea in freezing −15 degrees and wondering how to get inside.

The need for Plan B

"Before leaving London I had emailed all of the big companies in South Korea. The answer, where we managed to get one, was always ‘no’", she says.

"I got Koreans to call for me and speak in Korean to the bosses, but it didn't help either. So I simply had to go with plan B which was to turn up and stand outside the petrochemical factory and try to do the research from the nearest cafe where the workers were taking a break."

"So there I was standing outside the factory in the freezing cold. I wasn't warmly dressed as the airline has lost my baggage on the way. The security guards just told me that there is no way for me to get in to the factory. But then an elderly man took pity me. He thought I was rather strange and come a long way and decided to help me, phoned security and let me in. So it was on the human level it worked, not on institutional level."

A new perspective on globalisation

Seven years of travelling along the flip-flop trail has made Caroline Knowles more critical of mainstream theories on globalisation.

"Most of the work on globalisation - maybe not in anthropology but certainly in sociology - is told from the commanding heights of high theory. It is not grounded in people's lives. It is very much about flows, but the term flow in itself brushes out a lot of the friction and effort involved in moving things and people from place to place", she says.

Her flip-flop research made her realise that globalisation is much less a stable and permanent set of network arrangements:

"If you look at globalisation as a series of trails, which is what I try to do, then you can see that the trails go in different directions and can easily shift with small changes in circumstances. The flip-flop production is already moving out of China into Vietnam and Sudan and other places where Chinese technology can be exported, and where low cost labor forces are available”, she says.

"There are possibilities for objection, and that people are taking control of their lives, in ways that do not seem possible with conventional monolithic views of globalisation."

Following the Flip-Flop Trail: the perils and pleasures of doing ethnography from inside the logics of travel