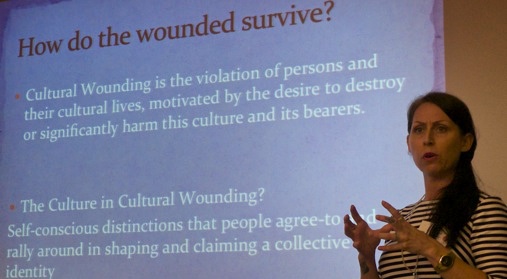 Amanda Kearney: “It has struck me that with suffering persists the condition of survival, marked by a capacity to ‘get on with things’” Photo: Lorenz Khazaleh

These were some of the questions that a group of researchers were discussing during three foggy autumn days at a conference retreat high above the city of Oslo. The result will be a new Overheating book titled Identity and Accelerated Change, which is currently in preparation.

“The contribution of the volume will be a better understanding of the pressures on identification in the early 21st century, owing to different factors, but which may in many cases be described at a general level as global neoliberalism. Rapid changes in the social fabric may affect, challenge or confirm people’s perceptions of themselves, their social belonging, who they are and where they are going,” research director Thomas Hylland Eriksen explained.

The book will provide a wide range of case studies from all over the world. It will discuss both the (failed) attempts to create cosmopolitan identities within the UNESCO World Heritage program (Christoph Brumann), look at the relations between old and new elites in Afghanistan (Torunn Wimpelmann), explore the connections between food and identity in Sri Lanka (Wim Van Daele) and explain what monuments such as Stonehenge and the Vietnam Memorial in Washington can tell us about self-other relations (Iver B. Neumann).

The connections between identity and economy

Several researchers are going to address the connections between identity and economic change. Overheating researcher Cathrine Thorleifsson, for example, is studying the consequences of the economic crisis in Europe. She is especially eager to find out if there is a connection between the economic downturn and the rising popularity of anti-immigrant parties.

“Racism can be used to counter insecurity in times of crisis; it can be used as a coping strategy in order to protect your job. In another situation you might go to a party with your Jewish or Muslim neighbour. I'd like to find out when and how racism occurs”, she said (read more: Economic Crisis Fuels Radical Nationalism?).

Keir Martin has studied the consequences of changing economic landscapes among Manchester United fans. The commercialisation of football is dividing fans all over the world.

“Manchester United fans”, he said, “have had to negotiate sharp changes in identity over the past twenty years. Many of them will argue that the club’s character has become unrecognizable from 25 years ago as a result of an intensified commercialization of the club in a new global entertainment marketplace.” 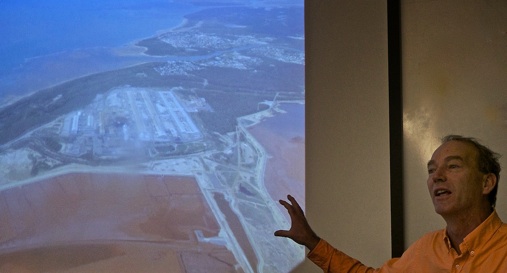 Thomas Hylland Eriksen: "To me, the workshop was a great success because it made us think beyond the commonplaces about identity and reflexive modernity, and look more critically at the ways in which the rhythms of change affect social memory, collective identification and place." Photo: Lorenz Khazaleh

Several contributors to the volume have studied sites that similarly have become unrecognizable compared to a few decades ago. Gladstone, Australia, where Thomas Hylland Eriksen did fieldwork, went from being a small town in decline to an industrial centre and one of Australia’s largest coal ports.

Lac La Biche, in northern Canada, where Lena Gross carried out fieldwork, is another example. This small town with a large native population has experienced rapid changes due to the development of the oil/tar sands industry in the last 20 years, including a stream of international workers.

Rapid change may entail crisis and conflict, but researchers stressed that this does not always happen.

“In Gladstone,” Thomas Hylland Eriksen said, “most people are optimistic about the future, and they are not worried about change. Although the current boom is rapidly fading, there is a widespread conviction that ‘something new will come up’. Change is being perceived as a necessity to stay where you are.”

Endurance — the power to withstand the greatest changes and pressures without breaking — has been a topic in the presentations of both Elisabeth Schober and Amanda Kearney.

Schober has been on fieldwork in Subic Bay in the Philippines, an old U.S. naval base that was converted into a Special Economic Zone. There she came in contact with people who belong to the indigenous group known as the Aeta.

“Endurance is an often overlooked virtue, but a vital one for the Aeta who have been exposed to (neo-)colonial, military, religious, and economic forces from outside over and over again”, she said.

Kearney was on fieldwork among indigenous families in Australia and with African descendants in Brazil. She asked the question of how histories of colonisation, enslavement, trauma and suffering can sit alongside survival, transformation and ethnic vitality. “It has struck me that with suffering persists the condition of survival, marked by a capacity to ‘get on with things’”, the researcher from the University of New South Wales said.

When talking about accelerated change, increasing mobility and transnational connections, one easily forgets that for an increasing number of people, the possibility to cross borders has become more and more limited. Heike Drotbohm presented her research about people who suffer from forced immobility due to stricter immigration policies in Northern America and Europe: deported migrants. “Deportation”, she explained, “brings the dynamics of spatial and social mobility to an end and produces a kind of social and individual standstill. Deportation is an experience of radical deceleration, individualization, atomization” (read more: The Wretched Face of Forced Immobility).

The role of anthropologists

Several speakers at the workshop dealt critically with the way anthropologists have approached issues of identity.

Branko Banovic provoked his fellow researchers with his claim that early ethnographic accounts about traditional manliness are at least partly to blame for Montenegro still being a homophobic society. “Older ethnographic accounts have created myths about manliness and contemporary anthropologists/ethnologists have done little to deconstruct them”, he said (read more: Homophobia: “Anthropologists should be aware of their responsibility”).

In Jeremy MacClancy’s view, many studies on identity — including some of his own — have been fundamentally misdirected. Anthropologists of identity tend in his view to focus on difference and conflict, thereby marginalising people who just want to live in peace and avoid being classified as members of particular groups. “I contend that an open-ended commonality is more the norm than a virulent sense of identity. Fieldworkers who forget that do so to their own detriment”, he said (read more: "Start with the commonalities!").

So how can we best describe and analyse differences and commonalities?

Overheating researcher Henrik Sinding-Larsen presented his first thoughts on his theory of cultural differences, which is highly inspired by evolutionary biology and researchers like Terrence Deacon. “Anthropology”, he said, “needs to revive an interest in cultural evolution. Concepts of self, individuation, and autonomy in a new biological context can illuminate paradoxes related to the rise of religious and cultural fundamentalism as a reaction to globalisation.”

How should such complex issues be communicated to the wider public? Fred Steier encouraged researchers to be more creative. The solution for enriching public debates does not necessarily lie in providing more facts but in encouraging people to see things from a different perspective. Researchers need to rethink their professional identity: Who do they feel responsible for — the scientific community, the wider public or the person who signs their paycheck? What is the role of scientists in a democracy? (read more: "New perspectives instead of more facts!")