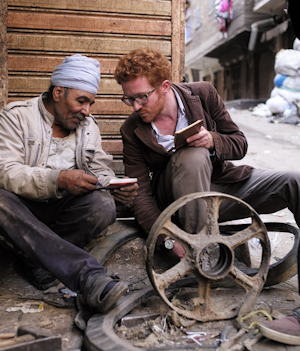 Anthropologist Jamie Furniss (right) is learning about the different wheel designs for donkey carts: The wheels in the photo are recovered from old military vehicles that used tracks (e.g. Tanks) and then become the wheels on donkey carts for waste collection. Photo: David Degner

People who just have moved to Cairo might be surprised by how sought-after their rubbish is. If the waste collectors, on their daily visits through the staircases of the city's apartment buildings do not find a black plastic bag filled with rubbish in front of your door, they will ring the bell. Not only once, but repeatedly. Until you finally show up with the bag. The bigger your bag, the better.

Among this world's waste collectors, Cairo's Zabbaleen have become sort of celebrities. Researchers and development professionals from all over the world have visited the impoverished neighborhoods in Egypt's capital where the Zabbaleen live among the waste they have collected.

The Zabbaleen have developed a system that achieves one of the highest recycling rates in the world. 80-85% of the things that people throw away are reused and sold as raw material to local factories or even exported globally, especially to China.

The Zabbaleen see value in the things that people discard. Waste is a word that hardly exists in their vocabulary, explained anthropologist Jamie Furniss  at Overheating's recent international workshop “Waste and the Superfluous. Precarious Living Amidst Worlds of Waste.”

Furniss is one of several anthropologists and other researchers who are currently doing fieldwork to collect objects, sound bites and video footages for the exhibition “Garbage! On Waste Economies In The Mediterranean.”

The exhibition will showcase material from Marseille to Cairo via Naples, Tirana, Istanbul, Casablanca and Tunis. It will be opened at the Musée des Civilisations de l’Europe et de la Méditerranée' (MuCEM) in Marseilles in March 2017.

The aim of the exhibition is not only to document the world of waste but also inspire people to find new ways of dealing with objects that they no longer need.

Among the possible objects Jamie Furniss has picked for the exhibition are recycled plastic for making sandals, pieces of used cotton transformed into stuffing for cushions, hangers of various colors made from recycled plastic, and a carpet woven out of recycled plastic.

Waste collectors, ragpickers, and scavengers are often stigmatized. They represent, in many peoples' and authorities' eyes, an unwelcome symbol of poverty and backwardness that should be eradicated. By contrast, in the planned exhibition, waste pickers and waste collectors are presented as innovators and entrepreneurs. Their knowledge may inspire those looking for alternatives to overconsumption and today's “throwaway culture.”

“Around the world, lots of small, innovative initiatives have popped up to reuse disposed objects and materials. What I like about the Zabbaleen,” Furniss says, “is that they are not a fringe or marginal movement, but represent the mainstream system for handling the waste in a 20 million person city.”

"The world's best recyclers are no environmetalists"

There are several things the anthropologist wishes to highlight through the Zabbaleen case.

One thing is that today - thanks to people such as the Zabbaleen – we find the highest recycling rates in the “Global South.”

The Zabbaleen outclassed European companies that the Mubarak regime temporarily hired 15 years ago to “modernize” Cairo's waste management. Even the World Bank - an institution that is not famous for embracing small-scale solutions - favoured supporting the extension and improvement of the Zabbaleen system rather than replacing it with supposedly more “modern” solutions in the 1980s.

The Zabbaleen achieve their high recycling rate without any fancy technology: they collect other peoples' rubbish along carefully defined routes, bring it back by donkey cart or truck, and empty it into their street, rooftop or home. There it is handsorted by women and then sold to factories or even exported to China and other places. Organic waste is given to pigs that are then slaughtered and sold. Everyone exercising the profession was born into it or joined through relatives. They share common residence in seven informal, slum-like enclaves around the city. Most Zabbaleen are Christians.

Jamie Furniss thinks it is interesting that these high recycling rates are achieved on the basis of logics other than those of ‘environmentalism’:

“There are different ways of getting people to throw away less things. One of the ways is to say we need to protect the environment. That's what we've been doing since the 1970s in Europe and Northern America. It had some success but the Zabbaleen case proves to me that you can get very high recycling rates through other logics.”

TedTalk by Jamie Furniss about the Zabbaleen

The anthropologist would also like to draw our attention to waste that we don't immediately see.

“When you see public spaces in Cairo it is easy to think it is a very dirty city. But their per-capita waste production is lower than in the developed world and the repair and recycling economy in Egypt are more efficient at preventing things ending up in the landfill. The success of European countries has mainly been in making their waste disappear, and paradoxically the more effective systems are for doing that, the less we are confronted with our waste production and the problems that it creates,” he said.

“In the exhibition, I hope, we can avoid the trap of over-emphasizing visually spectacular phenomena, such as uncollected litter, to the detriment of more difficult to visualize phenomena, such as the dumping of toxics in seemingly unperturbed landscapes,” he explained.

“The apparent cleanliness of public space in Europe leads to a false or at least incomplete comprehension of the waste problem, and a self-congratulatory narrative that I would like to contribute to unsettling in the exhibition.”

Ferniss wishes there were more studies about how people in the West deal with and talk about waste. Such studies may help Europe deal better with its waste, he thinks.

“Recently I read a really good book about waste and environment in Japan (Troubled Natures by Peter Wynn Kirby). It was criticized in one review for exoticizing Japanese culture by saying the way they relate to waste is the result of their cultural and religious beliefs. But the real problem, it seems to me, is the opposite: it consists of thinking of waste as a purely material or engineering problem, failing to see the connection, including in the West, between how we manage and speak about waste and our cultural beliefs,” he said.

“What we really need is not fewer anthropologists of waste in Japan or Egypt, but a more de-centered approach to our own waste cultures. It would be great if an anthropologist from Egypt or Japan would come to me in the UK so that I could hear what they think about my relationship to waste: In which way am I irrational? What are the things that are strange to them?”

While there is much to learn from the Zabbaleen, their system is not perfect, however. The hygiene conditions of their work pose serious health risks.

“In the waste there are often dangerous ingredients, such as syringes and other biomedical waste. There is quite a high rate of blood-born diseases among the Zabbaleen and this is obviously a major downside of their system. Nobody uses gloves", the anthropologist said.

"Some NGOs tried to get them to use gloves - but without success. I think one of the reasons is that the process of sorting is quite a sensory one. A lot of people prefer to have skin contact with waste in order to differentiate various materials. As part of my research I spent some time sorting plastics but I stopped because, you know, I don't want to get Hepatitis just to be able to say that I did participant observation,” Jamie Furniss said who is already planning his next fieldtrip to Cairo.

Profile at University of Edinburgh