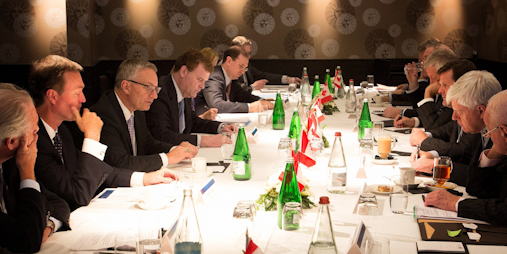 "Try to imagine if the community could hire anthropologists to go conduct research on the corporation, walk into the boardroom, interview the board members, figure out what their strategies are." Canadian ministers meet business leaders including the founder of the Barrick Gold Corporation. Photo: Foreign Affairs, Trade and Development Canada, flickr

The phone call came when she least expected it. “I just received a telegram from the Philippines,” said the voice on the other end of the line, her husband who was  more than 7,000 kilometers away in Canada. “Go to the Philippine consulate and check the newspapers. Another disaster has happened on the island,” he said. “I think it's something really big.”

Anthropologist Catherine Coumans did not expect this call at all. It was a nice day in Hawaii in early April 1996, and she was just about to make a presentation at an anthropology conference—a  presentation, strangely enough, about Marinduque, the very island in the Philippines where the telegram was sent from. Coumans had been on fieldwork on this island several years back, from 1988-1990,  studying Liberation Theology. Marinduque is a very little island with a very big mine, operated by the fifth-largest gold mining company in the world at that time, a Canadian one named Placer Dome.

Her husband was right. All newspapers Coumans found at the Philippine consulate were writing about it. Another mine waste impoundment had failed. It would be later described as the Marcopper Mining Disaster, after the local subsidiary. It was then the largest mining disaster in Philippine history. Two decades later, the island still has not recovered. One village was buried under six feet of muddy floodwater, causing the displacement of 400 families. Several villages had to be evacuated. The Boac River was declared unusable by government officials: It was no longer suitable for drinking, washing clothes, bathing, watering livestock, or for irrigation of rice fields. Most of the fish and shrimp in it had died.

What to do? How can researchers play a role that is useful for communities who find themselves in situations as these? Can anthropological research help to find ways to cool down overheated processes?

Coumans, one of the thirty participants at Overheating's international workshop on mining, has often thought about these questions.

Since she first visited Marinduqe in 1988, she had been confronted with the harmful side effects of mining on people and nature nearly on a daily basis. At that time, mine waste was being dumped into a wide shallow fishing bay, leading to loss of livelihoods. Children from villages along the bay were suffering from lead poisoning. In 1993, a dam burst and two children on another part of the island were smothered to death by mine waste that flooded down the Mogpog River.

The mining industry, she explains, is clearly overheated. “There is a struggle going on within the industry to get its hands on the remaining resources that are economic to mine,” she says. “The industry is in a huge rush to put their stake in the ground and say ‘this is mine’.”

And in this rush, other considerations, such as safeguarding the environment and the rights of local communities, risk getting left behind.

Paradise lost: A video about the 1996 disaster by Future In Our Hands

Even mining companies themselves cannot deny that mining is a harmful activity, the anthropologist learned. Asked by a regulatory body in Wisconsin, USA to give a single example of a mine that had been shut down for ten years after operating a sulphide ore body in the US or Canada for ten years, no mining company was able to provide a single example of one that hadn’t contaminated surface or groundwater.

On the "wrong" side of the struggle?

So what to do? Couman's discipline, anthropology, was not able to provide much guidance. Quite the opposite seemed to be the case.  In mining issues, anthropology seemed to play a rather dubious role, she came to realize.

When attended a conference she in 1998 on the environmental and social costs of mining, an activist approached her and said: “You are an anthropologist? I warn all the communities to be wary of anthropologists!”

There are many reasons for this: the lack of jobs in academia and NGOs, and the good salary the corporations are able to offer. The mining companies are actively recruiting anthropologists.  The companies are under pressure to get a “social license” to operate.

“Anthropologists,” Coumans says, “often present themselves as problem solvers, as people with specialized skills that can help a company that has problems when, for example, the local population is opposing the mine and stages protests. These anthropologists can gather all kinds of data for the companies, they do social mapping, and analyze power structures. They are basically providing intelligence.”

"Imagine if anthropologists would just walk into the boardroom"

As a result, Coumans said, some communities and NGOs are very wary of anthropologists now and, she stresses, "they should become even more wary.".

“Many communities still open up and talk to anthropologists freely without realizing that their information is going to become property of the mining company. While many of those anthropologists join the extractive industries in order to be an agent of positive change, the information they gather puts the company in a better position to push its claims. Knowledge is power,” she says.

“These communities are extremely vulnerable. An anthropologist can just walk into a community and start gathering data that are useful to the company. Just try to imagine if this were an equal playing field, and the community could hire anthropologists to go conduct research on the corporation, just walk into the boardroom, interview the board members, figure out what their strategies are. The company would never allow that to happen”, she said.

“The company is a black hole for the community. The company makes decisions on a daily basis, and the community has no power over it at all. The company, on the other hand, has extremely detailed knowledge of what is going on in the community, and they use this information! It's a very unbalanced situation and it's very upsetting that anthropologists are selling their skills to the ones who can pay them handsomely.”

Anthropologists have received similar criticism when they collaborated with colonial powers or more recently with the US military and CIA. After much criticism,  a program to study "the human terrain" in Afghanistan and Iraq to win “hearts and minds” was put to rest a few weeks ago. These institutions considered anthropological knowledge as strategic tool: Military generals were calling for “culturally informed occupation” and “culture-centric warfare”.

There is of course still a lot of anthropological research that is done independently of mining corporations. But this research is mainly focused on local communities and their responses to mining activities. It does not address the inequalities in the anthropology of mining: We know a lot about local communities, but very little about the mining companies themselves. What we need, Coumans stresses, is more anthropology of corporations.

"You can't rush through the world and leave behind a mess"

Nearly 20 years after she was shaken up by a phone call in Hawaii, Catherine Coumans is sitting in her office at MiningWatch Canada in Ottawa. The big disaster on the Philippine island made her leave academia and start up her own NGO. Two years later, in 1999, she joined a newly founded organization, MiningWatch.

During her fieldwork in the Philippines, she did not want to get involved. She considered herself neither an activist nor an NGO person. The big disaster changed her life.

When we call her in her office, she is trying to find a lawyer to continue a lawsuit against the company that - among others - was responsible for the disaster on the Philippine island in 1996.

“In 2004, we, the inhabitants of Marinduque together with MiningWatch, were able to get the US Geological Survey to go to the island and do some reports on all the damage that has been done there by the mining company Placer Dome. In 2005 we launched a lawsuit in the US against the company that, by then, had fled the Philippines. This lawsuit has gone on through so many years. But just about two weeks ago, the lawsuit was dismissed in the US in favor of its continuing in Canada,” the anthropological activist says.

“Just being able to reach that point after so many years is quite good. It is very difficult to have lawsuits in Canada against Canadian companies for what they have done oversees. The problem is the impunity of multinationals,” she adds.

Coumans sees her work in MiningWatch as an attempt to cool down our overheated planet:

“We're trying to cool things down by saying: You can't just rush through the world and leave behind a mess," she explains. "You have to slow down and take responsibility for the way you operate and the harm you cause. Communities need project development to go slower. Communities have the right to be properly informed about the project and to get enough time to think about proposed mining projects.”

While she still is taking part in academic conferences and even publishes papers in academic journals, she cannot imagine going back to a university:

“What is different from academia is that everything I do in MiningWatch matters and makes a difference to people. The immediacy, urgency and the passion that goes with the work is something I won't be able to find in academia, I think. I was interested in advancing anthropological theory. Now I wouldn't be able to spend all my time on that anymore. My work needs to be linked to real struggles on our earth. But I do know some activist academics whom I would consider a model for the kind of academic I would want to be if I were in academia today: One was my thesis advisor, Harvey Feit, another was the external reader for my thesis, David Wurfel. In the Overheating group there are also some examples.”