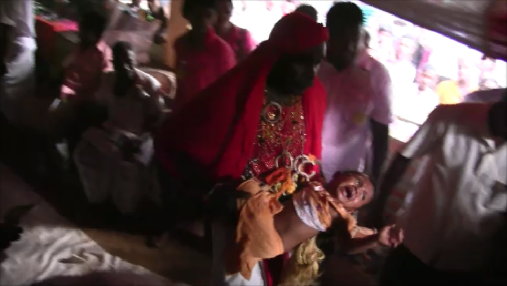 Ritual to obtain blessings from the local deity to ensure health and well-being of the one-year olds:  The health of both human beings and the environment have come under increasing pressure. Photo: Wim Van Daele

Just a few weeks ago the Overheating researcher returned from six months of fieldwork in Sri Lanka. The anthropologist was based in Kandy, with 150,000 inhabitants: the second largest city in the country after the capital, Colombo.

On his field visits, he witnessed the many changes the country has gone through recently. Since the end of the civil war in May 2009, the economy has been growing steadily. He sensed widespread economic optimism. Everybody wants to be part of the boom.

But he also noted that there were critical voices. The health of both human beings and the environment have, according to critics, come under increasing pressure. Wim Van Daele became convinced that there are more than the three crises of globalisation that the Overheating team has identified: economy, culture, and environment. He suggests adding a fourth one: the crisis of health and well-being.

“With the introduction of new foods and the increased processing of traditional foods, the overall picture of illness is changing”, he wrote in one of his letters from the field. Non-Communicable Diseases (cardiovascular illnesses, diabetes, obesity, cancer), according to the Sri Lankan president, now account for 70% of the deaths in Sri Lanka, he wrote.

An Ethnography of Fire

During his six months of fieldwork, he tried to find out what doctors and healers from different medical traditions in Sri Lanka think about this development: What is the relationship between food, health, well-being, and social change?

– What are some of the more inspiring things that emerged from those conversations?

– One really interesting aspect is that you can do a kind of ethnography of fire. In the West, we also have a notion of fire, but in a metaphoric sense. We say “the debate got heated” or “the anger was boiling over”. In Sri Lanka, there is a more metonymic use of the term, since fire is one of the five proto-elements that every person, plant, and animal consists of. Human and non-human beings are healthy as long as these elements are in their right balance, and this balance is achieved by ingesting balanced food.

– According to the healers I met, a lot of the health problems are related to too much “heaty foods” that create fire problems in the stomach. Too much heat or fire means the balance of the five elements is disturbed, and you get sick. These “heaty foods” are in popular discourse often associated with ‘foreign’ foods that consist of wheat flour.

– One thing that came up during fieldwork is that a lot of people are eating “short eats”. These are snacks, such as curry-filled sandwiches, made of white wheat flour where the nutritious bran is removed. School starts one hour earlier now, and more and more often both parents take on jobs to pay for their increased desire for luxury. Therefore, they no longer have time to prepare “real food”, which is still regarded in terms of rice and curry.

– I find this so interesting because fire is also important within Buddhist thinking. The ultimate goal is to extinguish the flame of desire; that's Nirvana.

– I think one of the next articles that I am going to write will be a Sri Lankan ethnography of fire. This will provide us a more emic way of overheating.

– Talking with healers is also talking about globalisation?

– It is talking about changes in society and, yes, very often also talking about larger-scale processes that encompass and thus reach beyond Sri Lanka.

– Is it always a critique of society and globalisation?

– Indeed, very often, a kind of implicit critique is formulated on the way society is moving. Sometimes it is from a very nationalist point of view. There are similar problems with heavily processed rice, but healers and doctors initially blame the foreign wheat flour following popular discourse, but when inquiring deeper on this issue, they tend to come to a more nuanced position where the industrial processing of food takes a core place in their critique.

– Sometimes it is also a critique on the “increasing laziness of people nowadays” compared to the “strong hard-working” people in old times.

– In addition, you also hear a critique on food corporations monopolizing food chains and the shift toward industrial and chemical agriculture in which people increasingly have less control over their own food processing. There is a sense that these corporations make profits in producing and selling food that is detrimental to people’s and the environment’s health.

– Some healers are not so happy about the development that women have started to work: If women stayed at home instead, they would have time to cook healthier food, they say.

– There are thus very different kinds of critique that come together in these health discourses.

– Surprising things? Assumptions of yours that were challenged?

– I didn't have too many assumptions, or at least tried not to have them. What struck me most was the overlap of the different systems in the diagnosis of the state of health in society, although the way of explaining is still very different. Medical practitioners from different traditions might propose different solutions, but on the problems they seem to agree.

– You wrote that you used yourself as a guinea pig for your research?

– Yes, a few times I went to healers. I also had my own stomach problems, which I acquired during former long-term fieldwork, and these complicated my research. Sometimes I had to cut short field visits.

– But from an anthropological point of view your stomach problems also were somewhere useful? It became more than participant observation?

– Yes, participant suffering, since I was facing similar stomach problems as many Sri Lankans!

– What did you learn from being a guinea pig?

– Well, I could observe how they work, and come to the conclusion. Some of the treatment I got was against certain types of devils; there were a lot of ritual verses and enchanted water. The healer was feeling my stomach and taking a lot of time for his consultation. He was looking at the entirety of my life. It's a much more comprehensive and individualized approach.

– But since they have to take into account the whole body, life history, and environment, healers were very careful to say that I have grown up in a different world that they don't know enough about. Therefore, it was hard for them to make a healing program for me.

– Some of your biggest struggles during fieldwork apart from that?

– People generally don't talk so easily to complete strangers, or they restrict themselves to a superficial way of talking. Since I stayed in Kandy to contribute with a food course to the innovation of the curriculum of sociology at the University, I had to travel around to conduct my research, and therefore unable to establish long-term relations of trust.

– So I was happy that my research collaborator Dayasisira Hewa Gamage had developed a good relationship with some healers during his many years of working with Prof. Gananath Obeyesekere. The interviews with those people were the most successful part of my research. When we went to other places it was more cumbersome, nevertheless we had some successes. We met the healer who treated the former president and a healer who worked for the soldiers. They were very interesting interviews.

The need for poetic language

– You used a quite poetic language in some of the letters from the field that you sent to the Overheating team. It was like reading good fiction. Are you secretly writing a novel?

– No, but for readers it is not always easy to imagine a different world. That can only be achieved by trying to add some poetic aspects to your writing.

– Will we get some of this poetry also in your planned two books?

– Yes. I try to oscillate between very abstract comparative and very sensory emic modes of writing. For instance, when I say food is an assemblage of very different aspects with which it is connected and connecting, then I am at a very abstract level, but when I am describing these actual aspects in the field, then I am almost writing a piece of music: You hear the sounds of the whipping of the milk in the tea, the pouring of the water, the boiling and the bubbling; you hear all those different sounds and then it becomes a concerto.

– The sensorial mode of writing aids in conveying a better sense of the field and a better grasping of it.

"Don't start from your own questions"

– In your experience, how well has anthropology been suited to find answers to your questions?

– It is very well suited but you also have to be interdisciplinary minded to do a good ethnography. The most important thing is that you don't start from your own questions but from things that concern people on your field site. The question is how we can stay open enough to find what we are NOT looking for, because otherwise you will always find what you are looking for. This, I find, is the main problem with a lot of anthropology today.

– As academics we are trained to find some questions more interesting than others. Your own milieu, apart from academia, also shapes the way you look at things, but it should exactly be the role of anthropology to destroy those frames and then to rebuild them in a cross-culturally sensitive way when you're in the field. I am all for comparison, but it should go in different directions and not end up by only comparing how our concepts take shape in different fields. Anthropology is about connecting and mediating these different concepts and approaches and thereby the anthropologist turns into a cultural broker.

Conference on anthropology and food

– Your plans for the coming weeks and months?

– I am organizing a seminar conference on food in September next year. It is a four-day event about how to use food conceptually as a way to do anthropology in a more sensitive way, and will deploy this approach on themes that pertain to Overheating: scale and abstraction, human/non-human boundary work, and health and well-being, followed by an event co-organized with SUM (Center for Development and Environmemt) to translate these into more policy-oriented approaches.

– But now, finally, I am going to get to the work I really need to do, and this is writing. At the end of September, I am going to Columbia University to work on the manuscript of my first book.

– Some last words to the readers in front of the screen?

– The point is to take food seriously. Food opens up different ways of looking at things, like health and well-being, which are, I think, definitely worthwhile to be called the fourth crisis of globalisation.

Wim Van Daele: Digestive problems as a symptom of modern times in their Joint Overheating

A global crisis of desire? Interview with Wim Van Daele