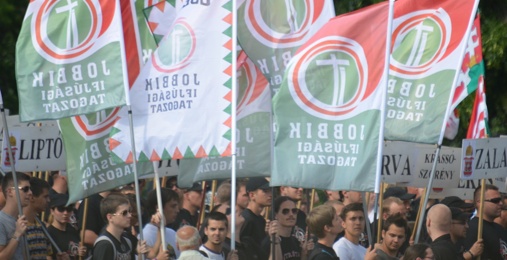 Historians have repeatedly pointed out that economic crises tend to give rise to radical nationalism and illiberal authoritarian forces. Is this also the case today, when recently far-right wing parties like the Golden Dawn in Greece, Jobbik in Hungary and the Swedish Democrats in Sweden have risen to power? This is the central question in Cathrine Moe Thorleifsson's research project Old and New Nationalisms: local responses to the economic crisis in contemporary Europe that she has just started.

Thorleifsson, an anthropologist with a PhD from the London School of Economics, is the newest member of the expanding Overheating project. She is also associated with the interdisciplinary project European Strains at the Centre for the Study of Equality, Social Organization, and Performance (ESOP)

"I want to find out how the economic crisis in Europe has changed daily life and the relations between people. I want to map the material and social basis, and see how they are related to negative sentiments towards minorities. I am interested in the various motivations for engaging with anti-minority discourses," she says.

In order to get detailed insights in the wide varieties of local responses to the post-2008 economic crisis, Thorleifsson will do research in three European countries with differences in demography, history, experiences with immigration and level of impact by the recession. 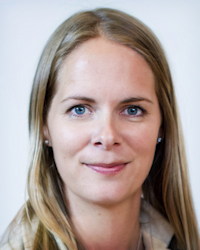 Cathrine Thorleifsson: "When studying racism and intolerance, it is also necessary to look for the opposite."    Photo: private

She will combine traditional anthropological fieldwork with other data-gathering methods, such as analysis of newspapers and online forums including comment fields, Facebook groups, in-depth interviews, and focus groups. Her study, she says, will be “an exploration of everyday racism and xenophobia and how it is invoked, understood, and expressed by its perpetrators.”

One of the countries she has chosen for her study is England. There she will look specifically at the conditions for  anti-Muslim sentiments. She plans to conduct fieldwork in Sheffield, where the far-right party UKIP got 22,9% in the 2014 city council election.

Her next stop will be Hungary. The rising anti-Semitism is a big issue there. The far-right party Jobbik with its anti-Semitic and anti-Roma rhetoric is currently the third-largest party in Hungary's parliament.

"In contrast to England, where prejudices are related to the presence of Muslims and build on experiences relating to being a citizen in a multicultural society, anti-Semitism in Hungary is linked to historical discourses about Jews," the anthropologist explains.

"The Hungarian-Jewish community is the largest in east central Europe. Jews have been playing a central role in the construction of Hungarian nationalism. It was against the ‘otherness of Jews’ Hungarians have defined themselves. Central research questions would be how these historical  events can serve as resources in projects of exclusion today, and what new motives can be detected in the negative representations of Jews."

Another interesting aspect in the Hungarian case is the combination of Hungarian nationalism with a turn toward the East:

"As UKIP and many new right-wing movements, Jobbik is resistant towards European integration and processes of globalisation. But Jobbik is at the same time turning towards Russia, China, and especially Iran."

Thorleifsson's third case study will focus on  Norwegians' attitudes  towards the Roma population. More and more Roma have migrated to Norway after the inclusion of Romania and Bulgaria into the EU. The reception has been rather hostile.

"Antiziganism," Thorleifsson says, "has a long history in Europe. But there has been scarce research on the current situation in Norway. Norway is not affected by the economic crisis to the same extent as the rest of Europe. Still, we might find some of the same fears and attitudes as in England and Hungary. This challenges the assumption that economic difficulties necessarily are the main source of xenophobia. Prejudice toward migrating Roma might be linked more to ideas about purity and pollution, than the threat or actuality of economic competition (‘They are dirty and interfering with the purity of Norway’)." 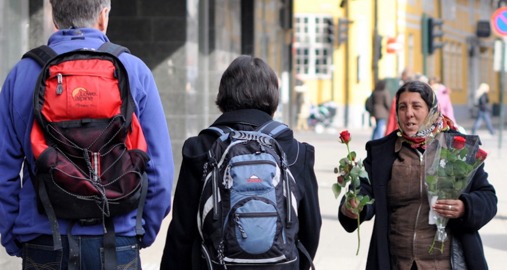 Many Roma in Oslo subsist by different kinds of street activities and black labor. They represent the poorest segments of the European populations. Photo: Henrik Berger Jørgensen, flickr

When looking for links between economic crisis and anti-minority sentiments, it might be tempting to assume that this will be a study about the white disenfranchised lower classes. This is not the case, the researcher stresses:

"While it is more the disillusioned working class in the UK that supports the English Defense League, UKIP has voters from all across the spectrum. In Hungary, Jobbik draws its electorate to a large extent from young generations and urban middle class male voters. In each case study examining prejudice, it will therefore be key to include participants of diverse age, gender, and educational and employment status."

New forms of trust and solidarity?

Anti-minority sentiments are a sensitive topic to research. As an anthropologist, Thorleifsson sets out with an open mind.

While she is primarily interested in studying anti-minority sentiments, she is convinced that it is also necessary to look for the opposite — for new forms of trust and solidarity.

"The danger in studies like this is that when I am looking for xenophobia, I only will be finding xenophobia," she says.

She follows the argument that Jeremy MacClancy made during his presentation at a recent workshop by the Overheating project. He said that anthropologists should become better at highlighting how people connect to each other. In his opinion, anthropologists tend to exaggerate differences and to downplay commonalities.

Instead of using divisions as a starting point of fieldwork, he suggested starting with commonalities – to study how people connect with each other –  and then, and only then, to see which identities begin to emerge, how, why, and in which contexts.

Racist in one occasion, cosmopolitan in another

Thorleifsson will draw on her experience with fieldwork in the Middle East, where she, among others, studied nationalist sentiments along the Israeli-Lebanese border.

"As before in Israel, I won't ask explicity questions about discriminatory attitudes toward differentiated others.  Rather, I will ask more open-ended questions about their life: How is life in this place? How has it changed or not due to the financial crisis?"

Here it is important not to essentialize people with anti-minority sentimens. People can be racist in one occasion, and cosmopolitan in another:

"What I saw in my previous research in Israel is that negative sentiments are very contextual: people can be the very best neighbors and very good friends, then a critical event happens and they turn against their neighbour in practice or rhetoric.

"Racism can be used to counter insecurity; it can be used as a coping strategy in order to protect your job, for example. In another situation you might go to a party with your Jewish or Muslim neigbour and that's entirely fine.

"My contribution will be a careful contextualisation of when and how racism occurs. Anthropologists have to allow the unexpected to happen in the field. So if I end up with a project on harmonic coexistence in the Hungarian countryside, that would be wonderful."

Articles by Cathrine Moe Thorleifsson that are freely available online:

A fragile cold peace: the impact of the Syrian conflict on Israeli-Syrian relations (OpenDemocracy, 21.1.2014)