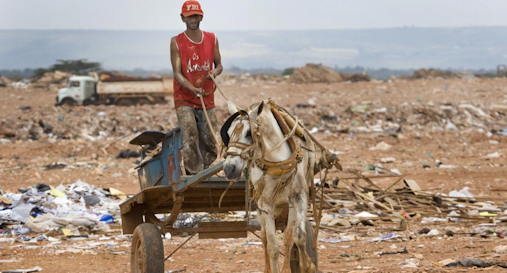 Waste pickers are entrepreneurs who are creating wealth. But their creativity is often not appreciated by the authorities or the wider society. Photo: Steve Evans, flickr

People are more creative and innovative than authorities acknowledge. Anthropologists, Michael Thompson explains in this interview, should be more active in changing public policies that prevent people from helping themselves.

Thompson was one of the participants in the most recent Overheating workshop on waste. In his opinion, waste is a prime area for anthropologists to get more engaged in and thereby make themselves relevant.

Michael Thompson, who was a student of Mary Douglas – the renowned author of “Purity and Danger” – was perhaps the first social scientist to see waste as worthy of serious academic inquiry. Back in 1979, he published “Rubbish Theory”, a book that was “ahead of its time” and until now “has not been superseded”, according to Thomas Hylland Eriksen, the leader of the Overheating research project.

Although “Rubbish Theory” quickly went out of print, 37 years after its publication it is still in high demand. Used copies are traded online for several hundred dollars.

Cars, for example, decline in value until they are discarded as worthless, but later they can be rediscovered and labelled as antiques or classics. Neglected historic buildings in London that planners described as “rat infested slums” were re-valued by creative grassroots activists as “glorious heritage”, and later sold for several million pounds.

Now, nearly 40 years after the publication of “Rubbish Theory”, Thompson is still challenging our understanding of things we throw away or deem superfluous. Together with an interdisciplinary team, he is currently developing ways to make the city “a force for good in its environment": a generator of ecosystem services.

During these years, he has worked as an applied anthropologist – both at universities and think tanks, and currently at the International Institute for Applied Systems Analysis (IIASA) in Austria.

“All of my work was intended to be applied, but anthropology has moved in the other direction”, he says. “There is a kind of bias in anthropology against application – to maintain some sort of academic purity, I suppose.”

– As an applied anthropologist, how do you look at university anthropology? Do you think anthropology needs to become more relevant?

– Well, yes. It strikes me that waste is a prime area to jump in and do applied work. It is an area where anthropologists could contribute to more constructive, and less destructive, policies.

– For example, during the workshop it was said that it does not make much sense to see waste pickers as complete victims. It makes more sense to see them as small-scale entrepreneurs who are creating wealth. They are not excluded, but they are not being recognized for what they are doing. Through skilled sorting and recycling, they are giving material that others regard as worthless new value. This change of perspective has gigantic implications, and not least for climate change.

– People generally are very creative and innovative. Many anthropological case studies have shown that. If development happens, it does not happen just through large-scale and “top-down” projects, but thanks to some sort of self help at the very lowest level. But often this creativity from below is not appreciated by the authorities or the wider society. Waste pickers who are sidelined or even prosecuted by authorities are just one of many examples. So, this is a wonderful opportunity for anthropologists to jump in and try to change public policies that prevent people from helping themselves.

– We find something similar with climate change policies in Nepal. Through the UN and the World Bank’s REDD+ programme, poor countries get paid for not cutting down their forests. If you start looking at the problem from an anthropological perspective, you will realise that there are great development success stories about Nepal’s 19,000 community forests. With only a little bit help from the national forest department, local people manage village forests very effectively – without any REDD+. So why do they need the UN and the World Bank? This is an important question to ask.

– Is it only about getting the knowledge out to the policy makers?

– In an ideal world that would solve the problem, but it’s not as simple as that. Policymakers often reject knowledge that does not fit with the solutions that they wish to put in place.

– There are, however, lots of instances where anthropologists have actively jumped in on behalf of groups that are not being heard. For example, there were plans to create a national park in a remote area in Nepal – Lake Rara – and the authorities were about to resettle the small community that lived there. Fortunately an eminent anthropologist – Christoph von Fürer-Haimendorf – jumped in on behalf of this group and explained why they were no threat to the national park. Thanks to his intervention, the plan to resettle them was overthrown.

– You are now trying to change the world by working together with engineers?

– Yes. A lot of people are surprised about that. Engineering has to do with results: you want to do things that change the world. But technology is never neutral; it has all kinds of social implications. Therefore it is important for anthropologists to study technology. You need both anthropology and engineering, together, if you want to achieve change.

– Together with engineers you are re-engineering the city?

– Yes, we are seeking to re-engineer the city infrastructure, especially its waste flows. Putting human waste into the water cycle, for example, is a terrible solution because we can get all kinds of valuable resources out of it, as we used to do 200 years ago. We lost the simple technologies that were able to treat waste not as waste but as valuable resource. So on the one hand some of what we do is developing new technology, new thinking, new methods, while other things are just a re-invention of old technologies that we have forgotten about.

– How was it for you to work with engineers?

– That is very difficult. When anthropologists venture into engineering, and engineers into anthropology, they easily get into trouble with their own disciplines. At universities interdisciplinary work is met with a lot of resistance.

– This project that I’m working on now, however, is a UK government initiative on the future of cities. We have 40 people around the table from many disciplines. All of them are able to say something knowledgeable about different aspects, and they are all interested in being interdisciplinary. This interdisciplinarity, I suppose, would never have happened if it was left to academics to decide what to work on.

– So now you hope that they are interested in following up what you suggest?

– You’re right, I actually think they are.

– The transformation of waste into something useful and valuable has been a topic that you have followed for nearly 50 years. It also seems to be a topic that fascinates the public. How do you explain this interest for your book "Rubbish Theory"?

– Well, the book has had a life of its own, especially in the world of art, and later within engineering and urban development. “Rubbish Theory” first got picked up by artists, art critics and art theorists, particularly in Germany. There has always been a strong interest in the book in Germany. It was translated into German twice actually. The most recent translation, by Michael Fehr of the Karl Ernst Osthaus-Museum in Hagen, was published in a very large format: almost as an art object in itself.

– But there is a sad story to its original publication as well. There was an argument with Oxford University Press. Senior figures said they should never have published it. And one Oxford economist took great exception to it because he thought it was claiming to be a book in economics, which it wasn’t. Only 1500 or 2000 copies were printed because of that row. Now, when people try to find the book, they realise that its price has been going up and up. Once I found it for $1000. So there is obviously some demand for it, and that’s kind of interesting.

– Thomas Hylland Eriksen encouraged you to republish the book?

– Yes, some other people also suggested that. The book would need a new introduction, so as to explain where it has gone since 1979, what’s new, etc. That would require me to pull together all sorts of works. I can do that when I get time.

– You have a very diverse background. How important has it been to your research that you had all this experience like being mountaineer, soldier and having studied maths and statistics?

– Yes, I’ve crossed so many different areas. One of the key lessons, I have learnt, is that you need to work with people from other disciplines; you can’t do it all by yourself.

Anthropologists to showcase ways out of overconsumption and throw-way living (Overheating, 9.12.15)

The city resilient - some systems thinking (together with  M. Bruce Beck)

Beyond boom and bust. How cultural theory can offer a new economic paradigm (RSA Journal, Winter 2008)