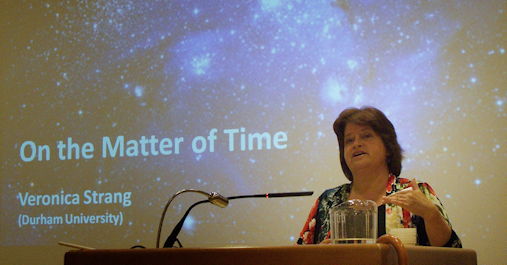 Veronica Strang: We need to consider not only human needs and interests, but also the needs of other species and ecosystems. Photo: Lorenz Khazaleh

The anthropologist based at Durham University is studying long-term human-environmental relationships and is one of the leading anthropologists of water. She has done research in Britain, New Zealand and Australia, including ethnographies of rivers.

Freshwater resources in many parts of the world have come under increasing pressure. If we want to understand this development, we have to pay attention to so-called "designed obsolescence", Veronica Strang explained during a recent stay in Oslo:

– During the last 50 years, to support growth-based economies, people have been enticed into intensifying patterns of consumption characterised by ‘designed obsolescence’.

– Instead of making products that would last as long as possible, manufacturers make products that will last only short periods of time. They want them to be discarded after a year or two so that people upgrade and buy new products continuously. This has resulted in a major expansion in resource consumption in the last 50 years - including water.

– Designed obsolescence wastes a lot of water. You have to keep in mind that every single object contains water that was used in its production processes.

This water is called "virtual water".

– Virtual water is the water that is contained in an object. How many liters, for example, does it take to make a pair of jeans? Jeans are mainly made of cotton, a very thirsty crop.

Australia, the driest continent on earth, is a major exporter of cotton and therefore one of the world's biggest exporters of virtual water.

The environmental impacts are enormous.

In Australia, cotton and rice can only be grown by means of intensive irrigation that places a major strain on its river systems.

Irrigation in Australia, Strang points out, has doubled every decade since the 1960s.

– Millions of hectares of soil are now so salinated from irrigation that they can no longer support even native vegetation, she says.

– An irrigation station called Cubbie Station is taking a quarter of the water that otherwise would flow into the Darling River. The Murray Darling Basin is one of the most degraded river basin areas in the entire world. 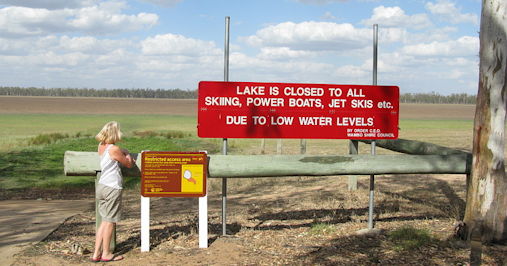 Lake closed: This is what cotton does to the water supply in the Murray Darling Basin. Photo: Geoffrey Rhodes, flickr

It’s not only because of accelerating consumption that freshwater resources have come under pressure. People’s access to water has been reduced by recent political developments.

Against privatisation of water

– According to Nestle CEO Peter Brabeck access to water is not a human right and water should be privatized.

– Most people would disagree with him. Three years ago the UN declared access to clean water a ‘fundamental human right’.

– All over the world we’re seeing major enclosures of water through the privatization of water companies and hydro-electric companies. In Britain the water industry was privatized by Margaret Thatcher in 1989. Many water and power companies, and large irrigation companies like Cubbie Station now belong to transnational corporations.

– The Worldbank has been promoting water privatization for many years. In most places, this has been done despite widespread public protests. In Latin America people have pushed back particularly hard against privatisation. Proposals to allow international corporations to take control of water led to violent resistance in Bolivia and Mexico.

Because water is such a key resource

– The topic privatisation tends to be black and white?

– That’s because water is such a key resource that the privatisation rises major questions about the potential to disenfranchise people of democratic rights.

– In 1957 Karl Witfogel wrote "Oriental Despotism"’ where he pointed out that if you want to govern a country you have to control its key resources, and the key resource is water. Donald Worster wrote about "Rivers of Empire", making the important point that to colonise a country, it is necessary to seize control of the freshwater resources because you cannot control an environment unless you can control freshwater.

– I’ve been building on those arguments and looking closely at the relationship between water and democracy. I think there is a really important link between the ownership of water and the capacity of a government to govern. If vital resources are held by private and often foreign elites, rather than by the public, who owns the state? What is the role of government, if not to manage key resources on our behalf? I think that’s one of they key questions about water privatisation.

– How did you study the privatization of water?

– I did an ethnography of the river Stour in Dorset, England (‘The Meaning of Water’). That project was not intended to be about privatization, but people along the river talked about it a lot. Even ten years after it occurred, they were still so angry about water privatisation - several described it as ‘the worst thing that Margaret Thatcher ever did’. 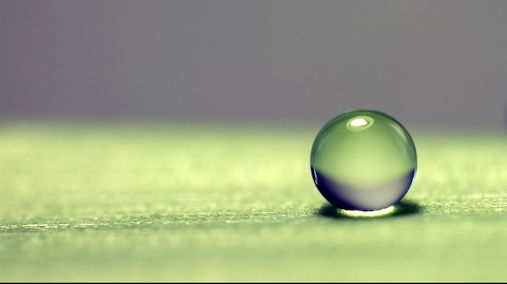 A key resource: If you want to govern a country you have to control the water. Photo: Giovanni Orlando, flickr

"They called me a communist"

– Have you also been studying up?

– Yes I’ve done a lot of work with the water-owning elites: the water companies, the miners, irrigators, government bodies. I think it’s very important to study both up and down.

– So how did they react when you confronted them with your arguments?

– Well, they make their case, they have a different view. Many of the people I interviewed are committed to neoliberal ideologies, and the idea that privatization is good and efficient. When I gave a paper about water ownership to the Australian Water Association, I used the term ‘social justice’ and they called me a communist!

– All discussion was finished then?

– No. It was quite convivial. My job as an anthropologist is to understand how they see the world, not tell them how to think. I try to make the issues transparent – for example to illuminate things like the relationship between water ownership and democracy; to promote robust theories about bioethical relationships and sustainability, and to point to alternative ways of thinking and doing, for example theories about degrowth that critique unsustainable growth-based economic modes.

– So why are water companies committed to neoliberal ideologies? What did you learn by studying them?

– I think they are the beneficiaries of political moves in this direction, and we’ve all been hearing since the 80s that the private sector is efficient and the public sector is not. Despite all of the evidence to the contrary, that idea has become well entrenched.

– You are you advocating anthropology as "community service", I read?

– Yes. Anthropology certainly has that potential, because what it should do is to make visible what lies under the surface of human behaviour. We are cultural translators, a bridge between different perspectives.

– Things that need more attention in your field?

– Everybody says we need interdisciplinarity. Many things are already happening in this regard, it seems?

– Yes, but our research assessment excercises and our own discipline tend to push us the other way. We are encouraged to publish in disciplinary journals, and peer reviewers are often similarly specialised. So publishing interdisciplinary work can be tricky. And if you send your article to journals from other disciplines, then they might ask what anthropologists are doing in their territory?

– Universities are basically designed around departments and disciplinary areas, so having a distinct disciplinary identity is also important when it comes to getting jobs.

– Growth-based competitive economies with privatized resources are probably bad news for both human and non-human species. If we want a more sustainable bioethical relationship with the world, we need to consider not only human needs and interests, but also those of other species and ecosystems.