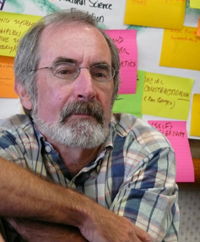 Fred Steier: "I am an academic wanderer, almost a vagabond." Photo: private

– We do not see how one thing leads to the other, we do not see the connections that are important. Therefore we are not able to make the necessary corrections to make things work again. I’d like to create a conversation about learning to see patterns that connect, he explains.

Fred Steier will be part of the Overheating project for one year.

He is a researcher who doesn’t fit in the neat departmental structures in academia.

– I am an academic wanderer, almost a vagabond, he says and laughs.

– As I regularily crossed disciplinary boundaries, I was always identified as the outsider in whichever group I was with.

When things get out of control

Currently Associate Professor in the Department of Communication at the University of South Florida, he also was research director at a child guidance clinic, he has worked with substance abusers and family therapy centers, did ethnographic research at NASA to look at their organizational culture after the Challenger accident, led a doctoral program for engineers and also has led an ongoing participatory action research program at a regional science center.

– A pattern that connects most of my work with the Overheating project is that in many places things have gotten out of control. People were not able to make necessary self-corrections to get things working again, he explains.

– Seeing connections between seemingly unrelated things is what I am doing. Cybernetics and system analysis are my main fields.

Rethinking how to learn

The Overheating project has identified three major crises on our planet: the environmental crisis, the economic crisis and the identity crisis.

Steier suggests that there exists a fourth crisis - a crisis of learning.

– What links these three crises is that we need to think of learning in a lot of different ways. We have to learn how to learn together. Otherwise we cannot make the necessary corrections to prevent overheating, he says.

– If we take the issue of the global warming crises as an example: It’s not enough to give people more facts. Those who have a belief system that resists what others take as scientific evidence as the basis for action will continue to resist “more facts".

– Communication is often imagined to be like opening a water line or throwing a ball: once the message is released the receiver is expected to get it in much the same condition in which it was sent. But communication does not work like like this. The information that is transmitted in our communication is always received within a frame.

Steier is one of many academics who are inspired by Gregory Bateson - a champion of multidisciplinarity and system thinking. Framing is one of the concepts that Bateson introduced. 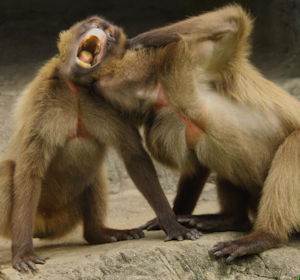 How do we know that somebody is playing rather than fighting with us? Are issues of overheating examples of frame conflicts? Photo: Mark Morgan, flickr

– One of Bateson’s most important papers for me is The Theory of Play and Fantasy where he talks about how we actually know somebody is playing with us rather than fighting with us?

– His paper is based on research on primates in the zoo. How does the recipient of a bite in the neck know that this is an invitation to play, rather than an attack? How do we communicate about our communication process?

– One of the things that I would like us to think about is that issues of overheating often are examples of frame conflicts: One person might be in the fighting frame while the other is in the play frame.

– Where do we have frame conflicts in the economic, environmental or cultural crisis?

– What can we learn from this?

– What we have to learn is to question the frame we’re and the other ones are in. Bateson stresses that all acts of communication are both about content but also about relationships. A lot of times the relational frame overwhelms the content frame.

– For example someone proposes a new course or curriculum and I disagree with that and the person interprets it as a disagreement with them personally rather than a disagreement about the ideas. So what they’re listening to is the relationship rather then content.

– One of Bateson’s important ideas is the notion that he called “Deutero learning”: learning how to learn. What we have to think about is: How do we actually learn about different ways of seeing things? How to learn together with other people who have different perspectives? How do you engage with people to learn about their own learning process? How can we create a frame of mutual learning? How can we develop some cooperation and establish some shared frame?

In his Overheating-seminar Steier is going to present case studies about creating a space, a “third place” where people can discuss controversial topics without them becoming overheated. One of the tools he uses to achieve this is the World Cafe.

– With the World Cafe, one of the major design principles is to encourage participants to look for deeper connections in the ideas that have been generated. Trying to generate variety while still creating a process of looking for deeper patterns that connect a variety of ideas is a key goal.

Steier hopes to discuss all these questions during the seminar.

– I see the seminar as a opportunity for conversation rather than giving a lecture where I have all the answers because I don’t have them. I hope, I am creating a conversational space for that.

– Thomas Hylland Eriksen once said that questions sometimes are more important than the answers?

– So do you have some questions you’re wondering about?

– Well one of the questions that I have is what we can learn from the questions of the Overheating project. The idea of overheating is a very powerful metaphor. What kind of connections do people see through this metaphor? What happens when they push the metaphor a little further?

– A student of mine is writing a dissertation about homeless people here in Tampa, Florida. You wouldn’t think about homelessness as an issue of overheating. But she saw the connection immediately. She said that’s exactly what is going on when you look at the policies around homelessness and how people frame the issue.

– Some issues that need more attention?

– What I think is important is how universities are organized to take seriously notions of interdisciplinarity. How do we build up interconnections and ways of speaking with each other across disciplines while not letting go of the disciplines? And how do we actually get universities to explore their assumptions about how learning has been compartmentalized (divided into sections) and turned into a business?

– Some last words to the readers in front of the screens?

– The “learning crisis” about which I was talking connects with the three crises in the Overheating project in the strong sense that we, and our learning institutions, have become addicted to ways of thinking about formal learning that have lost the needed flexibility and cannot adapt to new circumstances. It is another example of addiction and overheating.