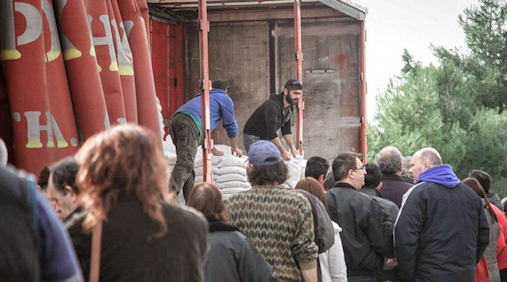 Distributing flour in bulk in a working-class area of Athens'. With incomes plummeting and retail prices rising the idea for farmers to sell their produce directly to the Greek public has proved to be a huge success. Photo courtesy of the solidarity economy anti-middleman group of Petroupoli, Athens.

Time banks, volunteer-run health clinics and pharmacies, alternative currencies, food distribution without middlemen, visions about a shared humanity: “The new solidarity economy in crisis-ridden Greece has arguably a wider impact on peoples’ daily life than the much talked about rise in far-right parties like Golden Dawn,” Rakopoulos says.

Unemployed university graduates, working-class pensioners, bricklayers, automotive mechanics, and other people “mostly from humble economic backgrounds” are experimenting successfully with alternatives to austerity policies that have been dictated by the EU Commission, the European Central Bank and the International Monetary Fund. Under-reported by international mainstream-media, these experimenters have started establishing structures of an economy based on mutual aid, cooperation, bartering and collective welfare.

“Economists may tell us that the current Greek crisis is a macro-economic phenomenon, amenable to resolution at the macro-level only, by high politics. But the way the people I have met through my research integrate their practical responses to the excessive food prices and their ambitious vision of how Greece could escape the economic crisis suggests that there are also other approaches at stake,” he stresses.

For an anthropology of solidarity

The anthropologist, who is part of Egalitarianism project at the University of Bergen, currently researches the anti-middlemen movement, one of the most successful solidarity economy initiatives that popped up in Greece since 2010. The context of a “condensed historical time” that Greece is currently undergoing offers a vantage point to investigate solidarity itself from an anthropological point of view, he underlines. “I am interested in how localized movements scale-up to wider, global concerns. The ethnographic data come from Greece, but my research is mainly about solidarity as a concept and how solidarity links with economy. Solidarity is a concept that resonates with anthropological notions, such as reciprocity or the moral economy, but is not discussed per se in anthropology as much as it could be.”

The movement he is following organizes food markets in cities around the country where farmers are able to sell their products directly, without the use of middlemen. This movement started as reaction to public anger at the amount of money that was disappearing into the pockets of middlemen.

“Producers and consumers come together in a spirit of solidarity”

With the broker’s share out of the picture, food in these markets became up to 50% cheaper than in supermarkets - an important parameter for the livelihoods of people whose wages have been cut at least by half in the last few years.

Farmers profit as well. Many farmers struggle to make a living on account of the low prices they receive for their produce from food wholesalers and the retail chains. “You have to pay high prices, but they, the producers get low turnover,” a young activist told the anthropologist. “What’s the common thing in this equation? It’s the fat cut taken by the middlemen. Producers aren’t necessarily the enemies of consumers, and both sides have to come together in a spirit of solidarity. We can help each other by coming together.”

That’s what they have been doing for a few years now. It is estimated that roughly 20–25% of Greece’s population has benefited from the movement so far.

“In Thessaloniki, at the heyday of the movement, during my fieldwork (latter part of 2013), there were around ten such markets taking place around the city, every Sunday, from eight in the morning till around four in the afternoon, with thousands attending,” Theo Rakopoulos says.

“Every time I joined similar events, people pointed out to me the need for ‘anti-middleman’ action, and most often without being asked about it, expressed their gratitude for their ‘work.” 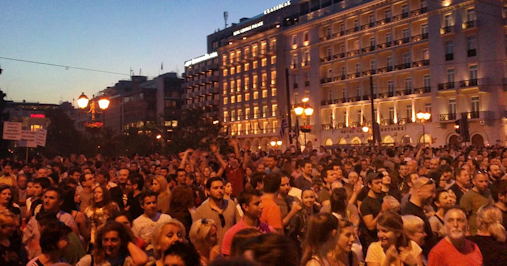 Protest against austerity policies in Athens. By experimenting with alternatives to austerity, Greece is seeing vivid dissemination of anti-middlemen groups, which claim that they operate within the scope of solidarity economy practices. Photo: Christina Kekka, flickr

These markets, he stresses, are about more than selling cheap food that people are can afford to buy.

“What is even more important in my understanding is how this movement works as a form of political education: It mobilizes people who are usually outside the political scene.”

The activists aspire to shift the ways that people think about the economy and the economic crisis in Greece overall.

"The sharing and distributing practices and ideas of solidarity are contagious. And they could build up to broader change. Bringing localised solidarity economies into contact could easily lead to a general contest against mainstream economics,” an activist said.

Their solidarity economy expands beyond the scope of economy. It also includes the vision of a shared sphere of sociality.

People who join the movement are required to sign a pledge that states that they are not involved in far-right politics or hostile to migrants from other parts of the world who find themselves in Greece.

“The idea of sociality implies a shared humanity rather than a shared citizenship. This is important, especially in the context of rising xenophobia in some parts of the population. In this movement there are quite a few immigrants participating. It cuts across national and other backgrounds,” he says.

“The pledge is also a reaction to practices from Golden Dawn activists who handed out food to people, but only to those who could prove that they are Greek,” he adds.

The future of the solidarity economy?

Theo Rakopoulos is especially interested in discussing the future of the solidarity economy during his presentation in Oslo,

Currently, the movement is in a state of relative hibernation but is likely to gain traction very soon in a range of different formats. Many activists are about to transform their informal networks into cooperatives. In May, the anthropologist is going to embark on 12 months’ fieldwork in Greece to study this new development.

“Cooperatives are not identical with the solidarity economy, but might form continuation in the future,” he explains.

This formal body would work through a market mechanism underpinned by internal solidarity between producers and consumers, rather than through the anonymous pursuit of individual gain.

The activists don’t reject the market in toto.

“Their idea is that markets will make cooperatives sustainable in the long run, provided they are embedded in structures which foster solidarity between people. One of these structures would be a state which provided the legal framework to support an economy consisting, in large part, of a network of linked cooperatives. Here they place a lot of hope in the new Syriza government,” the researcher explains.

From mafia to poetry

Theo Rakopoulos has studied cooperatives for some time now. For his PhD at Goldsmiths, for example, he embarked on fieldwork on rural anti-mafia cooperatives in Sicily. He is currently completing a monograph based on this research, tentatively entitled: “Divided by Land: Labour and moralities in Sicilian antimafia cooperatives”.

Rakopoulos has also published books of fiction in Greek. In 2012, he won the national prize for a debut author. In the future, he’d like to combine his identities as author and anthropologist. One of his future projects might have to do with poetry. “I’d like to explore the political economy of poetry, how social groups form around the sociality of sharing poetry, by way of a gift economy of skill,” he says.

The Future of Solidarity: Food Cooperativism as Labour in Greece

Theodoros Rakopoulos: Between event and ritual: the ‘SYRIZA elections’ in Greece (egalitarianism.no 2.2.2015).

Theodoros Rakopoulos: ”The future lasts a long time…or is it here already? The Left in power in Greece” (Focaalblog 2.2.2015)