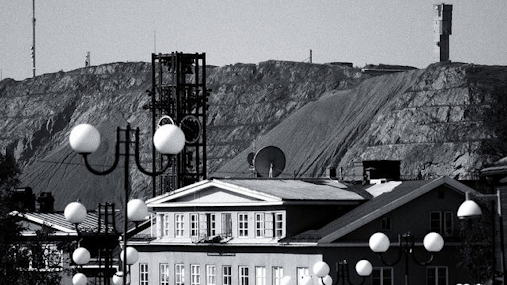 A few months ago, with the destruction of the first apartment blocks, an unprecedented relocation project started for real: An entire city would be demolished and rebuilt a few kilometers to the east. The whole process has been managed by the mining company without much intervention by state authorities.

The reason: The mining operations are causing the ground under the northern Swedish town of Kiruna to crack or give way. In 2004, the state-owned mining company LKAB gave local politicians an ultimatum: move parts of the city centre or risk stifling Kiruna's largest employer and, with this, the future of the whole city.

An unprecedented case of change

Four thousand households, two major highways, the national railroad, and the majority of the city’s infrastructure have to be demolished and rebuilt. The old church, voted Sweden’s most beautiful building in 2001, will be taken apart, piece by piece, and then rebuilt in exactly the same way.

This new Kiruna is partly built in such a way that it can be moved again. According to a representative from LKAB, “the city will always be moving” as long as the ore body remains a profitable resource—an estimated 100 years.

The Overheating project looks at how people around the world deal with situations of accelerated change. Anthropologist Elisa Maria Lopez presented on this extreme case of change, the (continous) relocation of a whole city, at Overheating’s fourth international workshop on mining.

From the US to Sweden

What is it like to live in a city that always will be on the move? Where gondolas wil l be a major means of transportation because they are so easily moved to another place? Where the life and death of the place you call home is determined by the wellbeing of a single company? What does such corporate-led displacement of people, without nearly any government intervention, tell us about the way Sweden is heading?

It was because of an art project that Elisa Maria Lopez first set on a plane from the US to Sweden. There she got inspired to study anthropology and write the master’s thesis at Columbia University titled The Idea of North: Indigenous Identity, Land, and Environmental Politics in Northern Sweden. After graduation she returned to Sweden with a Fulbright fellowship. When she heard about the ongoing relocation of Kiruna and got to know people from the Kiruna Sami community who were facing new potential mining activities on their lands, Lopez decided to make the relocation the subject of her PhD dissertation at Uppsala University.

Over a period of four years she has been talking with residents and tourists, reindeer herders and architects, bureaucrats and planners. After much hard work, she also was able to conduct fieldwork in the mining company.

The picture that she presented at the Overheating workshop differed quite a bit from the one that dominates the public debate. Media—both national and international—have been publishing enthusiastic accounts of Kiruna’s unusual future. Most journalists are fascinated by the plans of the architecture firm White Arkitekter to transform Kiruna into a model city for sustainable living.

“LKAB and politicians emphasized future development possibilities and saw a political and social consensus of the project as either secondary or a given,” Elisa Maria Lopez said.

Living in Europe’s northernmost mining town gave her insights into less talked about aspects of the relocation process.

“Euphemisms like ‘social transformation’ or ‘city move’ that were used by the mining company and politicians are downplaying the fact that this is a forced displacement,”  she stressed.

People have very little influence on the process that is, according to the anthropologist, completely controlled by the mining company.

“Everything is being paid for by the mining company. If your house is going to be affected by the relocation you have to negotiate with the mining company. This is nothing that the local municipality has anything to do with,” the researcher explained.

“Public infrastructure and public services might be the only areas people can have some influence on, but when it comes to the whole situation as such, people don’t have any influence, and that’s why it’s clearly a case of forced displacement.”

That is also the case with the local Sami community. The relocated railway cuts through reindeer pasture land. The solution offered by the mining company was to build a bridge for the reindeer to walk over.

“The Sami were asked to give some input on how to build the bridge—obviously they were not given the choice to say no,” she said.

Since the mining company announced the need for a relocation in 2004, people in Kiruna have been living in a state of “chronic uncertainty,” according to Lopez.

“People might look forward to all the improvements the new Kiruna might bring. But on a day-to-day basis, planning is difficult when timelines for evacuating homes and businesses have been shifting continuously and reliable information is hard to come by,” she said.

“Homeowners, for example, think twice before updating their heating system. The same is true for the municipality, which avoids investing in infrastructure projects like improving roads. You see a decay starting to happen throughout the city. People are increasingly disturbed by this; they feel this is not the standard of living that they’d come to expect.”

People were also dissatisfied by the way the railway and railway station were relocated.

The railway station was, as the anthropologist explained, “a valuable and much loved social space in a town, which in spite of the wealth produced by the mine, lacks many public indoor places for people to mingle.”

The lack of public spaces for people to socialize was one of the main improvements locals hoped the “city move” would address.

But it seems to be otherwise.

“When they moved the railway, the focus was on the railway itself and not the building and social space. They replaced the railway station with a temporary trailer that was built with mismatched dirty chairs that could not seat more than ten people. People felt like it was a bad sign of things to come,” she said, though improvements have since been made due to public demand.

“Now, they’ve built a temporary railway station that is a bit nicer, but nothing permanent has been erected. People worry this will become the norm, especially with the downturn of the ore prices in recent years.”

“Another problematic aspect is that this new station is far away from the city center. The only way to get there is by car. In the past you could walk straight  into the city, but now you can’t anymore,” she added.

So, what is there to do about it?

With the relocation in the mining company’s control, it has been hard for the inhabitants of Kiruna to influence the process. The power structures in the ore-field are informal. The mining company and the local authorities had been making agreements without written contracts for many years (until an audit by Price Waterhouse in 2012), the anthropologist learned. Formal consultation processes with the public are still almost completely lacking.

“State authorities have repeatedly refused  to engage in the process. Officially, LKAB is a state-owned company. But it is currently run, managed, and held accountable as a private company, making it difficult to know what actors are responsible,” Lopez said.

“This tension or blurriness,” she stressed, “has never been addressed. There are obvious possibilities for conflicts of interest. Key politicians simultaneously serve on the governing board of LKAB and in Parliament, or within regulating agencies."

"While some might argue that this is due to the centering of Swedish cultural values on consensus, high levels of social trust, and low corruption, in this case it can also be seen as a blurring between the ambitions of the corporation and the neoliberal state. Both are interested in continued extraction and profit from one of Sweden’s most valuable national asset,” she said.

Until recently there were hardly any critical voices to be heard.  In contrast to nearly all the other mining sites that were discussed during the workshop, in Kiruna there is no presence of either NGOs or other anti-mining activist groups. The only people who are talking about problems there are investigative journalists.

“There is a dominant idea that what’s best for the company is what’s best for the town. LKAB has been the town’s largest employer for 125 years. Many generations of people have worked for this company. In this unique part of Sweden, the mining company has had more influence than the state. LKAB, for example, legally finances the salaries of municipal officials and politicians in the nearby town of Gällivare, which is also facing forced displacement due to mining,” Lopez explained.

Recently, organisations such as the Iron Workers Union began challenging the mining company on behalf of their members. More and more people are calling state authorities for help in negotiating with LKAB. “Homeowners demand compensation for their demolished houses that is sufficient to  afford a new home in the new city,” the anthropologist said. “This issue is still unresolved.”

"People, be wary of anthropologists!" (Interview with Catherine Coumans from MiningWatch Canada)