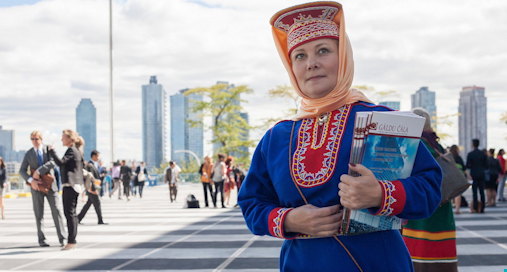 A Sami representative at the UN World Conference on Indigenous Peoples in New York, September 2014: What are the effects of Sami participation in international indigenous politics? Photo: United Nations Photo. flickr

Hernes is one of several master's students in anthropology who are part of the Overheating research project. She has recently returned from six months of multi-sited fieldwork where she studied overheating in the Sami context.

The Sami are recognized as indigenous people in Norway, Sweden, and Finland. Compared to other indigenous groups, they have come very far in their struggle for rights and recognition. Nevertheless, Sami identity is under pressure in many ways, says Hernes, who has both Norwegian and Sami background herself.

Suicides and the uncertain future of reindeer herding

– What are the threats to Sami identities? What does overheating mean in the Sami context?

– Much of the pressure is related to the uncertain future of reindeer herding. Due to overgrazing of the pastures, authorities are forcing reindeer herders to slaughter their animals. Mining is often mentioned as another threat. Plans to extract gold in Finnmark will mean the further erosion of reindeer pastures, according to critics.

– Some Sami told me this is a situation where it hard to be a carrier of Sami culture. You'd like to continue your family's traditions, but you might not be able to. Reindeer herding is a big part of Sami identity. In northern Sweden there have been many reports about an increasing number of suicides and mental health issues in connection with being unable to continue reindeer herding.

– Language is another hotly debated issue: How to keep Sami a living language that can be used, learned, and taught? Even in Karasjok, that is located in the so-called Sami core area, Sami people struggle with getting health services in the Sami language. We just had a TV debate about this issue.

– Some of the young people I met had problems with carrying their heritage and trying to be Sami and "modern youth" at the same time. Indigenousness is sometimes regarded as something frozen, and people expect you to be "traditional." So when are you Sami enough? I actually wonder if I should use “Being Sami Enough” as title for my thesis.

– It's been multi-sited fieldwork. I've been on fieldwork at the Sami parliament and NRK Sapmi (the Sami regional office of the Norwegian state broadcaster), and I participated in the Barents Indigenous Peoples’ Congress and Conference in Tromsø. There I met people from Norway, Sweden, Finland, and Russia. They were talking about language issues and discussing problems with extractive industries. It was really interesting, and I got a lot of new ideas on how to formulate my work.

– In Karasjok I also interviewed people who worked in mental health facilities and met activists who have shaped current Sami politics. I participated in the annual meeting of a youth group here in Oslo, and went to the Permanent Forum on Indigenous Issues at the UN Headquarters in New York. The UN meeting was really important to understand how big indigenous politics have become.

– Can you describe it?

– I have read about the UN, but it's another thing to see and feel how far the Sami have come. It makes me proud of the fights that people have had before me. You feel the Sami presence in places like the UN because Norway is a rich country and we have the possibility to send people there.

– It was fantastic to meet so many different people. You could really feel people’s pride in being able to present their cases in the UN, network with indigenous peoples in other countries, and support each other. The UN is really a big deal.

– In the 70s or 80s, nobody would have thought this would be possible?

– Is your research also a personal project?

– Yes. I am Sami and Norwegian myself and was asking myself many of the same questions that I asked my informants. It's a project where you create a new identity. I feel a new pride.

– Has fieldwork changed you yourself?

– Absolutely. My pride in being Sami is even stronger than it was before. Now I feel that I am able to call myself Sami, not just half Sami. I also gained a closer connection to my family there. I've never stayed for that long in this area before.

– Some would say such personal connections might be a disadvantage for one's research?

– Yes, I understand. One might overlook things when you know the setting. On the other hand, a lot of people told me I could not have done this research if I had not been Sami myself. They would not have helped me.

– Are people still skeptical towards Norwegians who study Sami issues?

– Yes, some people are. That might be the reason why I got the impression that being Sami is so important. It helped to have close connections to the area. When I meet people in interview settings or in the supermarket, the first thing we do is find out if we are relatives in some way.

The worst part of fieldwork

– Did you encounter difficulties during fieldwork?

– Yes, the worst part of fieldwork was when I was just walking around with nothing to do, struggling to find people to talk to.

– It is difficult to study processes that are going on in big settings like conferences and on the internet. You can't study people who are sitting in offices and working on computers. So sometimes I wondered what I was doing here. I am throwing my life away by just walking around, I thought. I was really down in this period.

– Even though you already had these close connections to the place?

– Maybe it's also hard to study "your own" kind of background. You can go so far, but you cannot go further.

– How did you get out of this down period?

– I think the turn happened when I got to the UN. I did not think it was possible for me to participate, and it took a lot of work. When I finally arrived there, I felt I was actually getting somewhere.

– Why should people care about your research?

Overview over all master projects