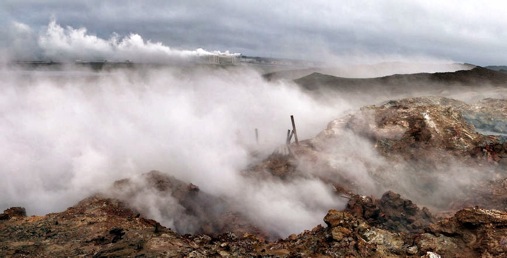 Iceland is the world’s largest green energy producer per capita. Renewable energy provides almost 100 percent of electricity production, with about 75 percent coming from hydropower and 25 percent from geothermal power. But Iceland has increasingly been caught making news headlines such as “Iceland Bets on Oil to Boost Fragile Economy” or “Progressive Party Excited About Climate Change, Oil Exploration”.

“Melting ice is expected to make the Arctic more accessible to drilling, mining and shipping, and Iceland is eager to position itself as a base for some of that activity,” the New York Times wrote recently.

Overheating master student Pernille Ihme is currently on fieldwork in Iceland to study this new development. 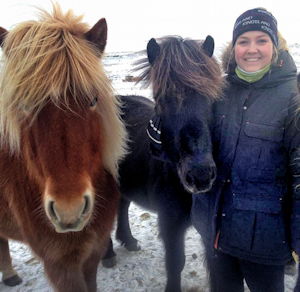 Pernille Ihme:  "I think if we could be more pro-active, it would be possible to both take care of the environment and to take care of the communities without having to start new oil projects." Photo: private

– Where are you now and what are you doing?

– Right now I am in the region of Austurland in Iceland, in a very secluded and beautiful area. The village where I live is one of the three possible places to host the oil industry. I am living in a small, family-owned hotel, cleaning rooms and helping out with whatever they need. I get a free place to stay in return, so it’s really nice for me to be here. Before I lived and worked on a small horse farm a bit farther up the road.

– The first month I lived in Reykjavik, the capital of Iceland. There I met leaders of youth environmental groups and some master students at a course at the Environment and Natural Resources programme at the University of Iceland. I am also planning to conduct the last month of fieldwork back in Reykjavik. I am doing multisited fieldwork.

A brighter future with oil?

– What is overheating on your current field site?

– I feel here it is somehow in between. They might have even experienced a cooling down period, as people moved away from this place to get an education, and most of them did not return. Then, in 2008, an aluminium plant was built here, and some people started to move back. Now with the possible development of the oil industry, everything could start heating up, and this place may become a boom town.

– What you are wondering about?

– Iceland is a country that is almost based on renewable energy and now has started to engage in the oil industry. While other countries have cut back on fossil fuels and are trying to be less dependent on oil, Iceland is just getting started. With its history of renewable energy I think this is quite interesting. So what makes them think of this right now and will it be worth it?

– What I, at least for now, found is that people in the capital area are more against oil exploitation, generally because of environmental reasons. The people who actually live in the area are more positive, because they feel something positive is happening that can contribute to growth in their region and give them a sense of stabilization of the economy.

– I have spoken to several young people who are open to the idea of moving to Norway or Denmark. With further investments and development in Austurland, there could be a brighter future, they think.

The oil business has a bad reputation, but at the same time the people acknowledge the opportunities it brings. Photo: Damian Gadal, flickr

– They don’t talk much about the negative effects of the oil industry where you are now?

– No. So far I haven’t talked to people who are negative to oil exploitation. The oil business does have a bad reputation, but at the same time the people acknowledge the opportunities it brings.

– What do they think about the protesters in the capital?

Experiencing the good life without putting the environment at risk?

– And what do you think about these positions?

– I think the people in the village do have a point. The infrastructure here is bad. You kind of feel that everything is crumbling a bit. I understand why they want to get a new life in the region. But I am not sure if the oil business is the way to do it. For the people, getting the oil industry here seems to be better than the alternative, which is that nothing is going to happen.

– So what is this all about, a kind of system failure?

– I don’t know what I would call it. Maybe it’s about globalisation: People want to be where things are happening, so they move into the capital. If there are no opportunities in the place they are from, they won’t move back.

– How can your study help to understand the crises on our planet?

– What are your hopes?

– I think that people in general are willing to take care of the environment. But sometimes they would choose a good community before the environment: a healthy community where things are happening and where there are good jobs and good schools for their children.

– I think if we could be more pro-active, it would be possible to both take care of the environment and to take care of the communities without having to start new oil projects. Maybe this study could map out what people think they would need to experience the good life and maybe it would be possible to achieve this without putting the environment at risk. 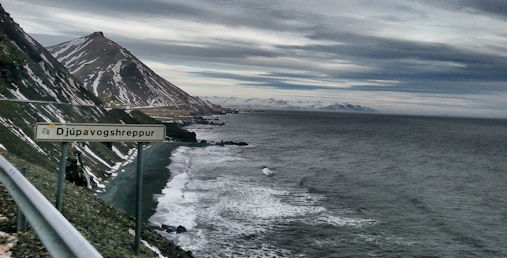 Austurland, a beautiful, but not a very sought after area to work. Photo: Pernille Ihme

– Regarding your fieldwork: First you were working on a farm, and now you are cleaning rooms in a hotel but you are researching neither hotel- nor farming life. Can you explain?

– I found it is easier to get people to talk freely when we were working together than when were in an interview setting. At the farm I was working around ten hours a day and we were talking the whole day about everything that I wanted to talk about. If I for example had lived in an apartment on my own, it would have been harder for me to get contact with people. Now when I live with a family they suddenly know an uncle who knows something or knows someone who would know something else.

– On Podio, the online platform that Overheating uses for internal communication, you wrote that even unfortunate incidents such as accidents can provide new knowledge for an anthropologist?

– Yes. After eight days at the farm I slipped on the ice and broke my arm. The following hours gave me a lot of information on how things actually work here. It is different to take part in the system than to just observe it.

– We were driving to the hospital and calling a doctor and he didn’t have an x-ray machine because there weren’t enough funds to have a real emergency room in this town. So we had to drive to the next town. But then we had to worry that the road might be closed because of the winter storm we were suddenly finding ourselves in. This incident showed me quite well that life here is not as easy as in the capital.

– What I also found very interesting is the diversity of the people: I felt I was at the end of the world. Away in the furthest-away fjord there is just one small hospital and the first doctor I met had Danish heritage, so we communicated in Danish. My anesthesiologist was Polish and made a point that we all had different nationalities. Now there is even a English doctor working here. I have been told that this is not a very sought after place to work, so the young, newly educated Icelandic doctors prefer to work in larger cities, or even abroad.

"To take more care of the nature and profit from that through tourism might be a more long-term solution than exploring oil that only provides short-term profit." Photo: Pernille Ihme

– You are living in a very small place. How do you spend your spare time?

– I have always worked with horses. Since the hotel also has horses, if I have some spare time, I try to spend it in the stable. Also, when I go for a ride with someone, it is easy to get people to talk. Like “Here there used to be a river, but it’s gone after they built the big hydroelectric dam Kárahnjúkar”. I always try to get them to talk about the place and the nature. Going on horse trips helps, because then you’re really in the nature.

– So it seems anthropologists never really have any spare time?

– No because, it’s weird, you’re always thinking about your research, even if I am just going to the store and I see something, I am somehow on fieldwork.

– The most difficult thing during your fieldwork?

– People don’t experience what I do as research. After I have been here for a week, people kept asking: When are you going to start with your research? But I had already got lots of things done just by talking to my colleagues while we were working. Sometimes I feel they don’t take me seriously.

– Another thing is the language. I can follow conversations in Icelandic that are not directed to me like when I go to a city council meeting or attend a dinner party. It is still difficult to have a conversation in Icelandic, though, but it is getting better every day.

What alternatives are there?

– I am going to meet a guy who used to be in the parliament and is very pro-oil. I hope he gives me insight into why he thinks oil is so important.

– I also would like to discuss more about what kind of alternatives there are to the oil industry. The nature here is so beautiful. I have been to Iceland many times, but never in the northeastern part and I think there must be a way to make this region more attractive to tourists. To take more care of the nature and profit from that through tourism might be a more long-term solution than exploring oil that only provides short-term profit.

– Another interesting development that I’d like to look at are the strikes among employees in hospitals, factories, restaurants, and stores that have just started. In June the airlines and the airport are going on strike as well. I’d like to find out what these strikes say about this country that is still not completely back on its feet after the financial crisis in 2007. There seems to be a lack of trust toward both the government and the oil industry. People I met are curious about what is going to happen now.

Understanding the oil-discourse in Eastern Iceland