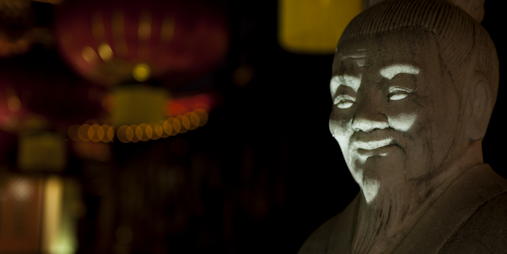 In Eurasia, from Aristotle in the West to Confucius in the East, there is a long history of intellectual thought which prioritized keeping markets in their place. Photo: Carla Sedini, flickr (CC-licence)

Researchers in his new project REALEURASIA – Realising Eurasia: Civilisation and Moral Economy in the 21st Century will undertake fieldwork in China, Burma, India, Turkey, Russia, and other European locations. Their aim is to find out if Confucian, Buddhist, Hindu, Muslim, and Christian civilizational traditions influence the way people run their households and their businesses.

The civilizations in this project, that is funded by the European Research Council, are linked to the “world religions” that Max Weber identified a century ago. Weber studied interaction between religious ideas and economic behaviour. Some religious traditions were rather capitalism-friendly (Protestantism), while others were more resistant to profit-maximising market-thinking (Confucianism, Hinduism).

– I am interested in looking at to what extent economic decision taking in the 21st century is still shaped by a background from pre-industrial times that we might call civilisation, the anthropologist explained at a recent Overheating-seminar.

The researchers - mostly doctoral students - will especially be looking at small family-run businesses with a total staff below 50, but also individual households.

They will combine ethnographic investigations of family businesses with attention to the embeddedness of economy in religion, polity, and society as they have evolved together in the Eurasian past: How do their economic ethics modify calculative rationality in family businesses? How do they see the limits of markets and commodity logic? How do they define ‘productive’ activities? Who helps whom, with and without calculation?

– Family-controlled businesses and the domestic economy are important arenas in which economic anthropologists can investigate the civilizational diversity of “market cultures”, he said.

These are in Hann’s view interesting questions at this moment in world history that - at least at the larger scale - is dominated by Northern Atlantic neoliberal economic models that have come more and more under fire - especially since the economic crisis of recent years.

Here, Eurasian civilizational traditions might provide inspiration for those who look for alternatives, the anthropologist thinks:

– I wonder if Eurasian civilizations can dig deep into their pasts in order to negotiate new forms of partnership, moral economy, and governance, above all ways of taming ‘the markets’ for the benefit of people and their environments, Hann said. In his opinion, anthropologists need to show how people organize themselves in an unequal world and to cooperate with other scholars in debating social justice.

Studying a concept like “civilization” is of course no uncontroversial thing to do. “The very concept of civilization”, Hann writes in his project description, “remains a provocation to most anthropologists”.

On the one hand because civilization often is used to produce dubious hierarchies between people: Civilization was often equated with “Hochkultur” (advanced technology, writing etc), thus excluding the great majority of humankind. In colonial times, the European powers felt it was their duty to bring so-called “Western civilization” to what they perceived as “uncivilized” and “backwards” people (“Mission civilisatrice”).

On the other hand, used in plural, civilizations were often seen as a closed entities, that were largely incompatible with each other as for example in the work of German historian Oswald Spengler (1880–1936). In recent times, authors like Samuel Huntington claimed that “the fault lines between civilizations” will be the battle lines of the future, especially between “Western” and “non-Western civilizations”.

This is a view of human diversity that contemporary anthropologists fiercely oppose.

Connections instead of boundaries

In his REALEURASIA-project, the researchers are going to study civilizations in a totally different way.

They are inspired by the way Emile Durkheim and Marcel Mauss used the term.

In a short “Note on the Notion of Civilization” published in 1913, Durkheim and Mauss proposed to distinguish civilizations from societies and states: the former were large-scale and long-term formations that could encompass multiple societies, and crystallized around diverse cultural traditions. While states have “political boundaries”, civilizations are “less clearly defined groupings” with “symbolic boundaries”.

Defined this way, the term civilization can be used as an alternative to the more popular but also highly problematic term culture, Hann suggests:

– Whereas culture is usually traced back to Herder’s image of separate, self-contained spheres, early French usages of the term civilization were potentially more open. Mauss and Durkheim used the term to look at the similarities of institutions throughout large areas. In this way, the term can help us to see connections between people, to recognize the long-term continuities by escaping from the blinkers of the nation-state. That’s also one reason why I am attracted to the term, Hann explained, though whether it can be applied in recent millennia to the world religions of Eurasia remains to be seen, he added.

The project will analyze the civilizational differences across Eurasia, but also tease out what they share, and thus what distinguishes Eurasia as a whole. It is hypothesised that, alongside civilizational pluralism, the long-term evolution of Eurasia has established a deep unity across the landmass.

Civilizational analysis, with a focus on pluralism and encounters, is alive and kicking in historical sociology and archaeology, but not in anthropology.

To introduce anthropologists to this field, Chris Hann is currently editing a book about anthropology and civilizational analysis with Johann P. Arnason. The volume will be based on papers held at a workshop in Halle, Germany.

Arnason is one of its leading figures of this field. He also prefers a "relational and pluralistic concept of civilization, i.e. one that emphasizes the interconnections of culture and other aspects of the social world" (Arnason). The scholar also thinks it is important to argue against dubious dichotomies like those used by Huntington.

During his talk, Chris Hann showed showed how this can be done. He presented case study from Xinjiang in China - the same location as that described by Ildikó Bellér-Hann in her Overheating-talk in 2013 (see "With bulldozers against minorities"). Hann explained why it is wrong to characterize the often violent conflict between the majority Han and Turkic speaking (muslim) Uyghur-minority as a civilizational conflict between Islam coming from the West and a Confucian-inspired Chinese empire from the East:

– Not all Muslims in Xingjiang are Turkic speaking. Another significant group are the Hui, Chinese Muslims, who have nothing in common with Uyghurs except their religion, and even in the domain of religion prefer to visit separate mosques and shrines. There is little or no intermarriage between Chinese and Turkic speaking Muslims, they do not even patronise the same restaurants. The Hui interact less with Uyghurs than with Han Chinese.

– The fact that the region has a plurality of Muslim groups which do not interact with each other suggests that it is too simple to reduce this cleavage to a civilizational conflict between Islam coming from the West and a Confucian-inspired Chinese empire from the East. If one wants to understand the conflict one has to look at China's ethnic minority policies instead.

– A return to civilizational analysis in the spirit of Mauss and Durkheim, as currently advocated by Johann Arnason, can help us to argue against such crude dichtomies, he said.