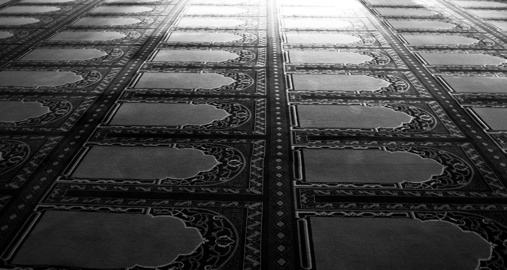 Inside a mosque in Buenos Aires: Argentina has a long tradition of receiving immigrants, including Muslims.  In the 19th century Argentina saw the first real wave of Arabs to settle within its territory, mostly from Syria and Lebanon.  Photo: Tiffany Linn Utvær Gasser

The Master's student in anthropology is sitting in the kitchen of her flat in a northern neighborhood of Buenos Aires. A guitar is hanging high on the wall, while the kitchen window provides a view into the backyard and everybody’s living rooms. Most of the windows are still closed though. It is still early. It is a Tuesday morning at 9 o'clock on an unusually mild winter day.

– What are you wondering about?

– I am here to look at how identity in Muslim communities in Buenos Aires is constituted and negotiated, particularly among converts. I am especially interested in ideas of femininity and masculinity. There has been much focus on Islam in the Middle East, in Europe, or the USA, but not so much on Islam in Latin America. Islam is growing in Latin America as well, and more and more Catholics are converting to Islam. I hope my research can help us to broaden our horizon about Islam as a global religion and the fastest growing religion in the world.

Busy fieldwork weekends at the mosque

– What did I interrupt when I called you just now?

– Nothing special. My day has just started.

– What did yesterday look like for an Overheating Master’s student in Buenos Aires, then?

– Yesterday I caught up on all my note writing. Usually there is too much happening during the weekends to record until later. Therefore Mondays are usually spent writing everything up.

– What is happening during the weekends?

– It usually starts Friday with the Friday prayer. Friday is the most important religious day for Muslims. At the mosque they have classes on Islam, followed by a free dinner. I usually stay at the mosque the entire day.  Thursdays, I go to a different mosque, where there are events, prayers and a dinner as well. I have also spent some Saturday evenings  in calligraphy classes. So, fieldwork for me is mostly during the weekends, and I kind of go in and out of my field. But when I am not in the field I take part in everyday life in Buenos Aires to understand what converts are opting out of.

– It seems you’re well integrated in the Muslim community?

– Yes, but I am more integrated among the women. Interaction between men and women who are not related to each other rarely happens. The gender-based divides are pretty strict in this mosque, mostly because this mosque is frequented by many converts who want to follow their new religion as well as possible. During the dinner, for example, women sit at one table and men at the other. Therefore I haven't been able to talk to men yet.

– There is another mosque, a smaller one, that I've been going to recently that does not seem to be so strict though. There is no single way to be a Muslim in Argentina; it is a constantly negotiated process. Following the strict, absolute path means that they would have to seclude themselves from Argentinian society. What Islam tells its followers instead is that they have to adapt to where you live. If they were to follow it closely, they would not be able to be in the same room in public spaces as men, for example. They make their own path.

– There is no "morality police" who is controlling them?

– Not as much as in places like Cairo where I spent one semester. In Cairo, the "morality police" is the neighbour across the street, the baowabs (doormen), or just somebody who knows somebody. Here the community is well integrated into Argentinian society and spread thinly over a large area. Some travel up to two hours to come to the mosque.

"Much better than in Europe"

– During your fieldwork, are you constantly comparing Argentina to Norway/Europe?

– Yes, I do. People I met have made this comparison as well. Both Muslims and non-Muslims living in Buenos Aires say the situation is much better here, although Muslims do have their own difficulties, of course. Wearing the hijab is a strong marker here as well and might result in bad looks in the street, not from men but from women. Some also choose to keep their new religion a secret to their colleagues at work.

– But I also feel that there is less fear of Islam here than in many European countries. In 1994, for example, 85 people were killed when a suicide bomber drove a Renault Trafic van bomb into the Jewish Community Center in Buenos Aires. Twenty years after the bombing, there is still nobody has been held responsible for the attack, but the general theory is that the Argentinian government is covering up for Iran, who stands behind the attack. Only 10 days before I came here the special prosecutor who had reopened the case was found dead in his apartment. I was wondering if this would spark some anti-Iranian and anti-Islamic attitudes, but people seem to be more bothered by how the government handled this issue than by who they think did it.

– This attack has not had much influence on the Islam debate?

– Did you ask them why they converted?

– Yes, I did. Many were unhappy with their previous religion, which for most of them was Catholicism.

– They like the lack of people in between. In Islam there is a more direct contact between worshippers and God, without saints or a rigid church hierarchy.

– On Podio, the online platform that Overheating uses for internal communication,  you mentioned that especially women convert? Why?

– I do have some thoughts about that, but I have to look more into this before I can say something. But usually they don't convert in order to marry a Muslim.

– What can we learn from studying how it is to be Muslim in Argentina?

– A comparative perspective broadens the horizon. It helps us to see that the same things are happening somewhere else, but people respond differently. In Europe we think the growth of Islam is a European problem, but it’s not necessarily a problem and it’s not necessarily European.

– If you were to get the opportunity to present your research on the front page of a major popular newspaper like Dagbladet in Norway, how would you design it?

– Hm, I think I would avoid using the typical representation of Islam, which I feel is  a woman wearing a hijab. Calligraphy or Islamic art would be something that people wouldn’t automatically react negatively to, for example.

– And what kind of headlines and stories?

– Maybe some personal stories about converting. Converting requires a lot from the convert. It is a thought-out, personal decision that sometimes is hard to combine with one’s “Argentinian-ness.” I’d like to normalize this kind of identity negotiation, I’d like to make it less threatening.

– What are some of the most interesting things you have learned so far?

– In religious questions the women rely very much on themselves. There is no female equivalent of a sheikh. Because of this lack of an unquestioned female authority, they ask each other and use the Internet to get answers to questions that they don’t want to discuss with men. I also found it interesting that the divide between men and women cannot be maintained outside of the mosque.

– I was surprised by how quickly I was welcomed. I feared it might be harder.

– The most difficult thing?

Ramadan fieldwork: Breaking the fast together

– Ramadan has started and I have somewhere to go almost every day in order to break the fast. I planned my fieldwork around Ramadan because the observation of Ramadan is an important part of Muslim identity. Now, for example, once one enters a mosque, the mood is completely different from what it had been so far. The bigger mosques organize Iftars on a daily basis, while in some smaller ones people meet once or twice weekly. For many, Ramadan implies long bus or train journeys, so I am impressed by how many do come during the week.

– You are going to fast with them?

– Currently I am not fasting, but when I spend an entire day with someone who is fasting, I won’t eat nor drink either. It’s interesting to hear people’s opinions about whether I should try to fast or not. Once I was told that since I’m not a Muslim, I would not have any benefits from fasting. But I would like to try it if some of the other Muslims were open to the idea.

Islam as an embodied and gendered experience in Argentina