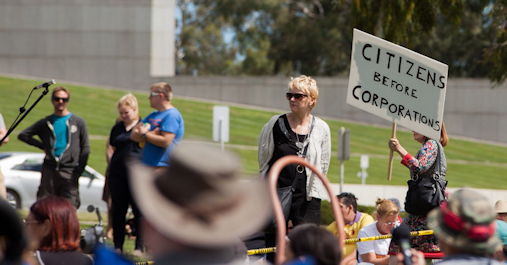 The conditions for change towards a more sustainable life are currently not be the best. Alliances between politicians and corporations overrun local communities. Here from a march in Canberra, 2014. Photo: David Burke, flickr

The Overheating research director has just returned from the biennial conference of the European Association of Social Anthropologists (EASA) in Tallinn. Inspired by the meeting’s theme - Collaboration, Intimacy & Revolution - more than 1200 anthropologists gathered in the Estonian capital to discuss the most recent research on current crises affecting this planet, new forms of collaboration, and the dynamics of revolutionary change.

The presentations of the workshop that the Overheating project has organized indicate that the conditions for change - away from the neoliberal doctrine and towards a more sustainable life - may currently not be the best.

“Why mess around with us at all, why not just go ahead without pretending that we have a say?”, an environmental activist who Thomas Hylland Eriksen met during his fieldwork in Gladstone, Australia, said. The mining industry would get its way no matter what people said, he claimed.

– In a way, the similarities of the presentations in our workshop were striking. Most of them documented discontent with the way in which large development projects are being implemented without proper consultation locally, and gave examples of the way alliances between politicians and corporations overrun local communities. Democracy seems to cease to function when big money is involved, even in societies usually seen as profoundly democratic, such as Australia, Thomas Hylland Eriksen summarizes. 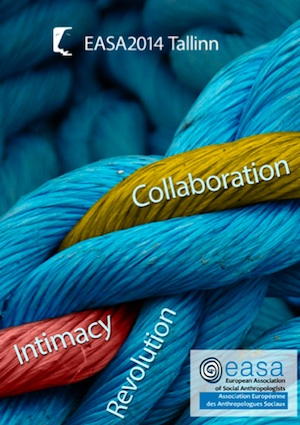 The activist he met in Gladstone expressed a feeling of disfranchisement that the researchers at the workshop found in various communities across the globe.

For example among the thousands of poor people in the Philippines who were displaced from their homes to make space for a large shipyard that a South Korean company built.

– The construction was not officially announced to the villagers, I was told, instead they just saw that there were movements in the area, the mountain was being flattened and there were workers, Overheating-researcher and workshop organizer Elisabeth Schober said.

Such land acquisitions, she explained, are a huge problem for people in the area where she did her research. Big corporate actors from abroad have been seeking to make use of large stretches of land in the area. The most recent example comes in the wake of the “Enhanced Defense Corporation Agreement” (EDCA) that the Philippines has forged with the USA: a 500 ha stretch of land located to the left of the Korean shipyard is to be transformed into a large naval base that the Filipino Navy plans to build so that the Americans can use it, too.

In two towns by the Turkish Black Sea, people were shocked when they heard about the plans of an Austrian energy giant that sought to build a power plant on precious agricultural land. Anthropologist Ståle Knudsen reported on their - unsuccessful - fight against this project. It was not only a story about the struggle against big money actors, though. It was also a story about the difficulties in shaping a united protest movement. Even though a broad base against this project could be established, identity issues and party politics eventually hindered their success.

– While the governments consistently labeled environmentalists as traitors to the nation, leftist groups attempted to appropriate the energy created by environmental movements for their fight against the state, the AKP and capitalism. In such a way, the potential of creativity and newness that may come with environmental protest was largely derailed, the anthropologist said. 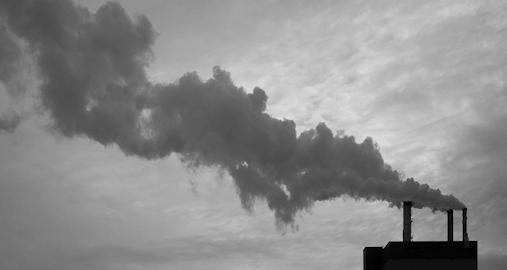 “As long as our smoke remains, it’s going to be fine.” Photo: Oscar Strawczynski, flickr

Seeing smog as something positive

Activism for alternatives is challenging, especially in areas where big money has established itself and people over time have become dependent on their industries.

In the industrial city of Bor in Eastern Serbia, the pollution from factories has become part of the city’s identity, Deana Jovanovic explained in her presentation. The researcher was surprised to learn that smog could be viewed as something positive.

One of the first questions she was asked during her fieldwork was “Did you taste our smoke?” And her informants usually did not want to complain. Instead, they were to some degree proud of the mix of sulphur dioxide, arsenic, lead, zinc, cadmium and soot with its sharp, pungent acidic smell that they are inhaling day by day. Smoke to them symbolizes prosperity, development and hope. As one of the inhabitants said: “As long as our smoke remains, it’s going to be fine.”

Thomas Hylland Eriksen noticed similar attitudes in Gladstone. Although people may complain about the side effects of industry, such as the destruction of mangroves and the negative effects triggered by large numbers of fly-in-fly-out workers, the majority of residents are supportive of industrial development, since it brings jobs and prosperity to the area.

– It is common, also among social scientists, to discard neoliberalism as dehumanising, oppressive and ecologically disastrous; but of course, there are many, and not just large corporations, who benefit from fast capitalism, at least in the short term, he said. 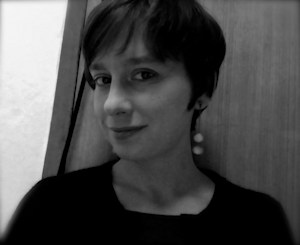 Elisabeth Schober: "It may not be the best strategy to just look at the environment without talking about people’s livelihoods." Photo: private

This perspective is often missing when transnational NGOs like Greenpeace are campaigning against polluting industries. In Gladstone, Thomas Hylland Eriksen did not find many Greenpeace supporters. “They’re into saving the planet”, one of the Gladstonites said, “but they don’t seem to care that much about people living in a city like this. Perhaps they just want to close the place down.”

The cases in the workshop show, Elisabeth Schober commented, that it may not be the best strategy to just look at the environment without talking about people’s livelihoods.

Neither 100% pro or against

People are generally not 100% for or against big-money development. Often, they have conflicting views on the same issue. They are aware of the damages done by the developments they are profiting from and are not always sure how to deal with them.

Short-time visions of the future that promise security and stability often win over long-term visions that are not so easy to grasp and often go hand-in-hand with doubts, Deana Jovanovic suggested.

This might also be the case for the mountain farmers in Hemsedal in Norway whom Anne-Katrine Norbye has studied. Many of them profited enormously from the neoliberal turn in Norway’s agricultural policy. Expansion of their business into tourism and the commercialisation of natural resources has turned many farmers into multi-millionaires.

Farmers and other locals might first seem happy about the increased tourism in the village, the anthropologist said. But in informal chats they would often talk more ambivalently. Many complain that “there is no community left in the village” and that the economic differences between traditional and commercial farmers are growing. Neighbouring children who used to be playmates are not necessarily playmates any longer as growing discrepancies in material goods and holiday possibilities come into play.

There was also one presentation about a successful protest against big money development. 50km north of the Australian tourist town of Broome, at the Indian Ocean, the local community was able to stop the construction of a $45 Billion AUD Liquefied Natural Gas Facility (LNG).

Carsten Wergin talked enthusiastically about the new kinds of alliances forged between actors who had not had anything to do with each other before. In particular, he stressed how indigenous populations made their knowledge about the region available to others. This made it possible to produce more accurate data on the impact of the LNG project than was provided in government studies – which eventually led to the cancellation of the project. In this case, political mobilisation at the grassroots level did in the end have a tangible effect.

– Clearly, the project was not only scrapped because of environmental considerations. As its main investor, Woodside Ltd., argued in their April 2013 decision, the LNG project would not have delivered the required commercial returns. However, without the significant delay that was caused, among others, by the community science initiatives that I discussed in my presentation, construction of the precinct would have started years before, Wergin emphasised.

Anthropologists themselves are not detached from these developments. The economic crisis is among them, too, which makes Elisabeth Schober think that the promised revolution at EASA might have to wait a bit.

– I noticed a widespread anxiety among the anthropologists I talked to. There are less and less jobs for them, and I heard of many anthropologists that couldn’t attend the conference due to a lack of funding. This for me overshadowed the revolution theme of the conference. Everybody still seems to be stuck at the level of struggling on their own, of making their way individually through this crisis.

Elisabeth Schober is sure that the debate on these issues will continue, though. She is also hoping that the papers of her panel will make it into a publication.

Theodoros Kyriakides: Anthropology at the margins: A report of EASA 2014  (Savage Minds)