The moustache is one of the most important symbols representing “traditional manliness”. The moustache as the logo of the Pride Parade was more than enough to trigger a cultural war.

“Early Montenegrin ethnology produced many scientific and popular myths regarding traditional manliness. Contemporary ethnology/anthropology has done little to deconstruct them”, Banovic said at the international workshop of the Overheating project about Identity and Accelerated Change.

The researcher from the University of Belgrade was one of several speakers who chose a critical focus on how anthropologists have approached issues of identity.

In his presentation he showed how some of the responsibility for homophobia in Montenegro lies in early Montenegrin ethnology and anthropology. During the Pride Parade, for example, 2,000 police were needed to guard just 150 participants.

As an effort to bolster its application to join the EU, Montenegro organized its first Pride Parade in 2013. Never before have lesbian, gay, bisexual, and transgendered people (LGBT) celebrated their sexual identity in this way in the region.

A cultural war about the moustache

But the attempt of Montenegro to show its commitment to human rights seemed to have backfired. Although the Pride Parade was staged under heavy police presence, aggressive counter-protesters quickly turned the event into a battlefield. 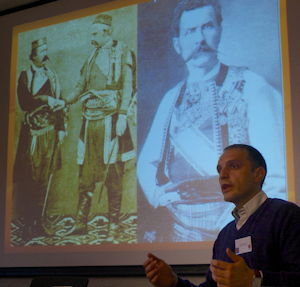 He got so angry that he decided to shave his moustache after wearing it for 57 years.

The connection of the event to Montenegro’s ambitions to join the EU triggered fierce reactions as well. It especially fostered the idea that homosexuality is a European import that threatens Montenegrin culture:

Although controversies over the moustache were specifically Montenegrin, they were structured on the basis of a pattern with well-documented main elements, Banovic commented: the centrality dichotomies of normal/abnormal, natural/unnatural, and moral/immoral; homosexuality regarded as an illness; religious institutions and officers that play an important role in the public debate on homosexuality; LGBT people who attack the core of national values; and the battle between the police and the right-wing groups. The conceptual connection of homosexuality and West/Europe, he said, is also well documented in other countries.

A distorted picture of manliness

But, as he showed, when Montenegrins talk about traditional manliness and consider homosexuality as inconsistent with their culture, they refer to a distorted image of Montenegrin culture. They refer to myths about Montenegro that early ethnographic literature helped to create.

Banovic analysed the most influential anthropogeographic and ethnological research of the Balkans at the beginning of 20th century. These are accounts, Banovic stressed, that belong to the traditionally defined domain of ethnology or ethnography. Although the majority of travellers did not view themselves as professional ethnographers, they often considered their accounts ethnographic.

Where are the data about real men?

Banovic describes these characteristics as myths because the ethnographic data do not contain data about real men. These early ethnographers did not study Montenegrin masculinity by observing and analysing the behavior of men in their daily life. Instead, they just asked men about how men ought to be. The data are based on expectations, norms or models, and not on particular individuals who may or may not fulfil the socially prescribed gender roles.

“Between the model and reality there was a large gap, and the interlocutor was providing the ethnographer with the model, rather than reality”, Banovic said.

“This means that if we start by researching traditional Montenegrin masculinity from the standpoint of narratives about traditional Montenegro, the result of our research will necessarily be a model. This model will contain a very large number of imputations and interpretations, and will significantly deviate from real past life”.

These early ethnographic records about men in traditional Montenegro, although they were theoretically and methodologically insufficient, have become instruments in protecting ‘traditional values’ and “one more argument against homosexuals”.

Of course, he said, ethnology and anthropology are not the only ones to blame. Aggressive counter-protesters have played integral parts in other Pride Parades in the Balkans and elsewhere in Europe. Nevertheless, he insists, anthropologists should be aware of their own portion of the responsibility for creating this context:

“If ethnographies were more about reality instead of normative ideals, if we had data about different traditional (less heroic and less macho) masculinities instead of the model of traditional masculinity, would the Montenegrin tradition today be one more argument in the homophobic arsenal? Who was supposed to deconstruct those popular scientific myths about the traditional manliness, if not ethnologists/anthropologists?”

Start with the commonalities! (“Anthropologists tend to exaggerate differences and to downplay commonalities. It is our moral duty to correct this distorted picture,” said Jeremy MacClancy.)

Economic Crisis Fuels Radical Nationalism? (Is the recent rise in xenophobia and right-wing populism in Europe linked to the economic crisis? Anthropologist Cathrine Moe Thorleifsson is about to embark on fieldwork in England, Hungary and Norway in order to find out.)

"New perspectives instead of more facts!" (A Superman cartoon was able to bring some movement to the polarized immigration debate. What can social scientists learn from this?)

Identity under pressure: New Overheating book in the making (How does global capitalism influence our relations with other people and our perceptions of who we are? How do people cope with rapid changes in their surroundings? Which roles can researchers play in times of change and conflict?)