Farmers in the Colca Valley organize collective work parties to clean the reservoirs where they gather rainwater and meltwater for irrigation. Photo: Astrid B. Stensrud

– What are you wondering about, Astrid Bredholt Stensrud?

– I wonder how climate change affects peoples’ lives and how people experience the changes. I will look at a whole watershed called Camaná-Majes-Colca in the Peruvian Andes from the poor highlands to the mid-valley and the more affluent desert area.

– I am curious about how different groups perceive climate change, and how they articulate their perceptions in different ways. I will look into how impacts tend to be unevenly distributed. Who is most vulnerable to climate change and who has the responsibility to do something about it? 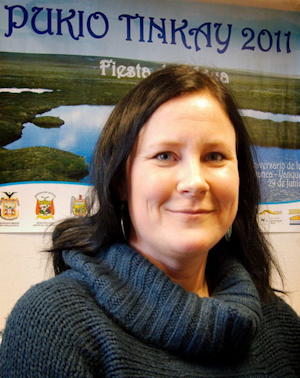 Astrid B. Stensrud: "It is important for people to know how climate change affects people in other parts of the world." Photo: Lorenz Khazaleh

– I will conduct fieldwork among different groups and try to see the world from the farmers’ and herders’ point of view, as well as from the point of view of the engineers, NGO’s, urban migrants, the politicians and government.

The prime indicators of global warming

– What is overheating in your project?

– During the last 10 years climate change has become a huge issue in Peru. Small-scale farmers experience that the rain is scarcer and more irregular. Irregularities are more extreme than before: It’s getting hotter, but it’s also colder. The evaporations and decreasing water levels are a concern because the glaciers and the snowfields are melting.

– Peru is the country with the most tropical glaciers in the world. They are called tropical glaciers because they are so close to the equatorial line. You only need a very small change in temperature for them to be affected and to melt. Therefore these glaciers are considered the prime indicators of global warming.

– But when the glaciers are melting there will be more water?

– Yes, for a short time at least. The problem is that these glaciers have been like natural reservoirs of water. People are using the melted water for irrigation. If it is melting too fast, it comes in greater volumes, and that causes the earth to erode. The earth loses its capacity to store the water. The water will flow directly to the Pacific Ocean and can no longer be used for irrigation.

"Water scarcity is a hot issue"

– Water scarcity is a hot issue. The largest cities of Peru are situated in deserts. 90 per cent of the population lives in dry, semi-dry and sub-humid areas. They are all dependent on water from the highlands.

– This is also true for the desert area where I will conduct fieldwork, the pampa of Majes-Siguas. Well, it used to be a desert area. 40 years ago a huge irrigation channel was built that brings water from the highlands and turns the desert into a fertile ground where they make agriculture products for export. There they are making a lot of money. This irrigation area has attracted a lot of migrants from the highlands. The problem is that there is not enough drinking water for the growing population.

– The second stage of this Majes-Siguas project has triggered many protests. The plan was to build dams and collect water higher up in the watershed in order to expand the fertile areas in the desert. However, people in Espinar, a province neighbouring the region of Cusco, contend that the dam will leave them without water as the water will be destined to the export industry and the development of the coast in the Arequipa region. 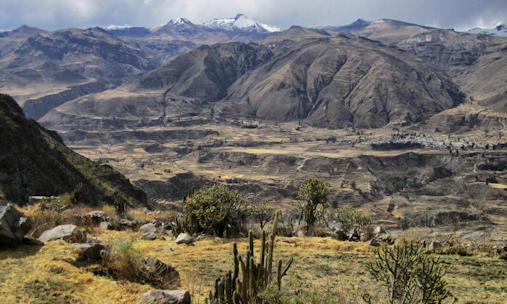 The environment of Colca Valley is arid, and people get worried when they see that the snow on the mountaintops is disappearing. Photo: Astrid B. Stensrud

– Where are the three crises of globalisation that you are going to study?

– 1. The financial crisis: After several economic crises in the 80s and 90s, Peru is now experiencing an economic boom. Nevertheless, the rate of poverty is still high, and the Quechua speaking herders in the highlands are among the poorest people.

– I want to find out if poor people are gaining anything from this economic boom, and whether the social inequalities are decreasing or increasing. Three decades of neoliberal policies have resulted in a deregulated economy with insecure labour conditions, and a high degree of underemployment and self-employment. The present government continues to implement these economic policies, which means more concessions to foreign oil- and mining companies, and more pressure on natural resources.

– 2. The environmental crisis is first of all about water. The economic boom is creating lots of environmental problems. Most of the growth is coming from the multinational mining industry that is polluting the land and the water, which leads to more social conflicts related to water and land in the Amazonian rainforest and in the Andean highlands.

– In addition to melting glaciers and drying springs, the earth is also perceived as warmer, and therefore it needs more irrigation water. Farmers use more water to irrigate a field than before, and they fear a future water crisis, where there is not enough clean water for everyone and where water is commoditized and privatized. 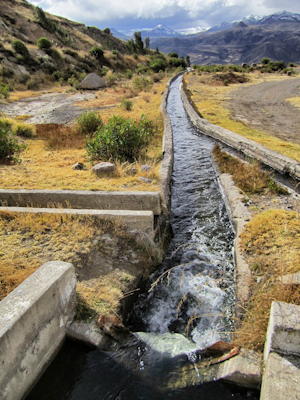 Farmers in the arid Colca Valley are dependent on an intricate system of irrigation channels and highly organized water distribution. Photo: Astrid B. Stensrud

– 3. The cultural crisis is about Peru’s national identity. 50% of the population is indigenous, but when people migrate from their highland communities to the cities, very few continue to speak indigenous languages like Quechua. Speaking Quechua indicate that you are poor and lack education, there is a lot of racism!

– There are some initiatives to make Quechua something to be proud of. I want to find out if this is something only for the tourists or something that also makes sense for young people in this area. I wonder if it is possible to be included as indigenous people in the national community or economy and if they want to be included?

– I remember one person saying he did not want to get included in this national identity “with the whites and corrupt politicians” because he was very proud of his indigenous background.

– In order to really be included, indigenous people should be able to participate on their own premises and to participate in deciding how the economy and society should be organized. Today, there are actually two indigenous women in Congress who took their oath in Quechua, so things are changing, but there is still a long way to go.

– What are the connections between climate change and identity issues?

– In the area that I am going to study, especially in the Colca Valley and the highlands, people take their relations to nature very seriously. Twice a year people go to the mountains and to the springs to make offerings: gifts of food, alcohol, coca leaves, and flowers. In the indigenous worldview everything is connected and people relate to their sentient surroundings in their everyday lives.

– Some say these rituals will disappear. But others seem to take the rituals more seriously because of climate change. Some NGOs are also starting to promote these ritual activities. I’d like to look more into these processes.

– Another issue is that when the environment people live on and depend on changes dramatically because of climate change, it also affects people’s sense of belonging and identity.

– Yes but I already conducted eight months of fieldwork in this area as part of the research project “From ice to stone” at the University of Copenhagen. We were collaborating with the “Waterworlds” project led by Kirsten Hastrup. I am not starting from scratch.

– Are there links to Norway?

– Not directly. But of course if you see climate change as something global, then we’re all responsible for Co2-emmissions.

"Important for people to know"

– What can people in Norway and other places learn from your project?

– I think it is important for people to know how climate change affects people in other parts of the world. People in Norway might think climate change is something abstract or something that does not even exist at all.

– It has been called double exposure or multi-exposure to globalisation. They are the ones who are exposed to all the crises simultaneously.

– Thomas Hylland Eriksen said it’s time for anthropologists to get more engaged in such big issues?

– I agree. Anthropologists should be more engaged and should dare to have opinions. In early anthropology it was more common to address big questions. Why should economists and historians monopolise global issues? In order to address these big questions our research should be embedded in ethnographic studies.

– I am excited about working four more years on Peru since I have become very fond of that country, have made a lot of friends there and I look forward to collaborating with them. I am concerned about these climate change issues and the effect they have on people’s lives; especially clean water and the struggle for equal opportunities are issues that are important for people where I work.

– I am also excited about working in a team with brilliant people and collaborate on the same research questions. Being a Phd student was rather lonely as it was only me and my individual project. Afterwards I did team work for two years in Copenhagen, and there I discovered that I like working in a team. You have people to discuss your ideas with and get feedback. It gives you inspiration.

– Last words to the readers in front of the screen?

– Well, I am very glad to be back at the Department of Social Anthropology in Oslo and to have the opportunity to work in the Overheating project for four years. I hope that many people will participate in the activities that we will organize and that we will be able to make a contribution to how we can meet the challenges of globalisation.

Overheating in the Andes: global connections and local articulations of climate change, capitalism and cosmopolitics