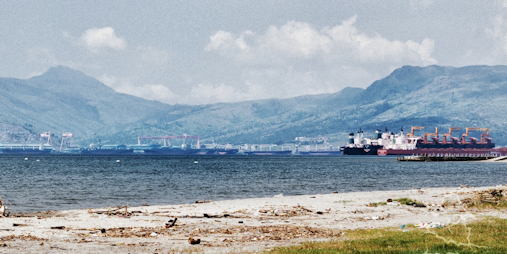 Subic Bay: a central hub for economic development in the Philippines, here  viewed from Subic Bay Freeport Zone, With the Korean shipyard in the background. Photo: Wonho Yi.

The social anthropologist is researching a well-known global phenomenon - offshoring. What happens when a company moves its business to a low cost country? Currently she is studying the changes that have emerged after massive investments by a Korean shipbuilder in Subic Bay, a booming area in the Philippines, where the costs of Labour are among the lowest in all of Southeast Asia .

– Where are you right now and what are you seeing when you look around you and out of your window, and what sounds are you hearing?

– I’m at the office of an NGO in Olongapo City in the Philippines, where I am waiting for an environmental activist with whom I would like to speak about a planned controversial coal-fired power plant. 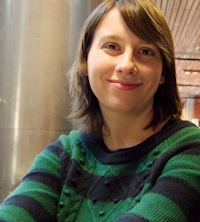 – Through the office window I see a little bamboo hut that is used by people to take a rest in during the hottest hours of the day. Behind that, I see the bay of a crystal blue color, with a number of banka boats. I can hear birds chirping, but mostly I hear the traffic from a busy road nearby. You can even smell the fumes – jeepneys, the most popular means of transportation in the Philippines. They can be beautiful to look at with their colourful decorations, and they are a fun and social, but not very environmentally friendly way to get around.

– What have you learned about overheating and the economic, cultural and environmental crises in your fieldsite so far?

– Economic differences intersperse with social or cultural differences in interesting ways here. Korean investors often come here with ideas about labour that they have acquired in their highly industrialized country - an industrialization that in Korea was achieved under a military dictatorship and at a great human cost.

– Many Koreans who are now in their 50s and 60s spent their youth working in the countless sweatshops of Seoul and other South Korean cities, where they worked extremely long hours in unhealthy environments, in order to produce cheap goods meant for export to the West. As a living legacy of that time, South Korea today has one of the longest working days in the world: 9 hours 26 minutes.

– Then Korean management and foremen come to Subic Bay and expect their Filipino workforce to labour away in the same kind of fashion that a Korean would. At the shipyard in Subic Bay, the Korean management has implemented a 9-hour working day, which goes against the 8-hour policy of the Philippine government. Double-shifts are also not uncommon, I hear.

– Korean-Filipino encounters at times are rife with tensions. The Filipino encounter with foreigners is often about incorporation, mixing and the creation of what anthropologists like to call hybrid identities. In Korea there seems to be a much stronger discourse that foreign elements need to be singled out and contained in order to protect that which is understood to be quintessentially Korean.

– Not surprisingly, then, the Korean community here in Subic Bay tends to stick closely together – and Filipinos, I sense, have trouble understanding this somewhat intense self-segregation. Such cultural differences are further heightened by huge economic disparities. 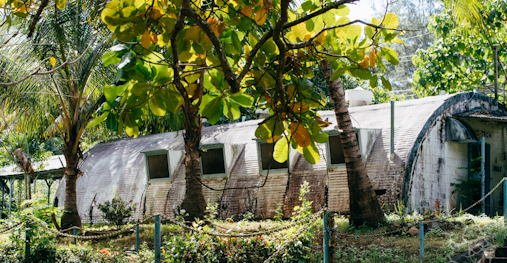 – This boom in Subic Bay means major changes in the environment: Roads are built in sparsely populated areas, overhead power lines are put in place, new condos put up in protected forests, old fishing grounds nearby are lost, and some poor people are forced to leave to make space for new developments. There is the same kind of tension between promoting the economy and protecting the environment that many of us in the Overheating team are exploring in their individual projects.

Afraid to speak up

– With all this focus on crises in Overheating project, have you also encountered signs of the opposite, something that gives hope?

– Well, one of my core interests here are labour issues, and this is not a topic in the Philippines that encourages much hope. Unemployment, despite all the buzz about economic growth, is on the rise and poverty is increasing.

– There is such an overabundance of people looking for jobs that few employers seem to feel all that much pressure to keep to international labour standards. I am always astonished by the kind of situations people find themselves in here – the level of labour exploitation that one finds in so many sectors.

– One example is a friend of mine, who is a care-giver: The other day she told me that her last employer took her cellphone away and locked her inside the house every morning together with the very sick child that she was supposed to take care of. She fled from the house two weeks later because she was worried the child might die in her care, and she received approximately 20 Dollars for two weeks of this kind of work.

– The Philippines has excellent labour laws - but their implementation is the problem. People tend not to know their rights, or they are too afraid to speak up because they are afraid that they might lose their jobs if they do.

– Don't people do something about it?  At Subic Bay is there no Kim Jin-Sook , the famous activist who stayed nearly one year on a crane to protest against exploitation of workers in Busan, South Korea, that you told about in our first interview?

– Labour here is in a much weaker position than in South Korea, where you have very strong alliances between a rather powerful labour movement and other social movements and civil society actors. So the question is not, why can the Philippines not produce someone like Kim Jin-Sook? The question should be: What kind of support would a labour activist like Kim Jin-Sook find on the ground if she were to occupy a crane here? And I'm afraid the turnout would be drastically different from what we have seen in Pusan in 2011.

– But nevertheless, I do find hope every day in the people I get to meet around here, in their positive attitude and in the energy and strength they muster up every day to overcome enormous obstacles in their way. 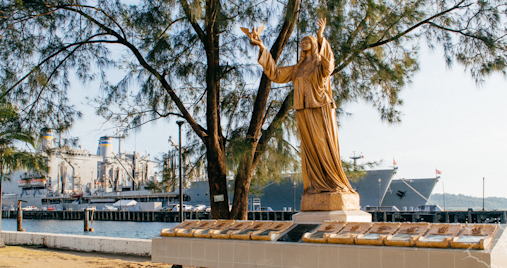 The present: "Hands that Freed the Nation" - a monument to those Senators whose historic "No"-vote put an end to the U.S. Naval Base in Subic Bay. Behind it, several U.S. naval vessels can be seen, currently docked at the Subic Bay harbour." Photo: Wonho Yi.

– There have been enough surprises. During my PhD studies, I did two years of field research in South Korea to explore the impact of the U.S. military on entertainment areas in and near Seoul. Until 1992, Subic Bay was home to the biggest U.S. naval base abroad. One thing that took me by surprise is how much Subic Bay is still dominated by the U.S. Navy, even though the U.S. Armed Forces have officially left the Philippines more than 20 years ago.

– Because of the intensifying conflict with China over the Spratly Islands, there seems to be much more support in the Philippines these days for the idea to bring the U.S. military back in. And you can really feel this shift in Subic, too. I still have to see how much I will be able to incorporate this in my writings later on – how much I can and should stray away from exploring the Korean-Filipino relationship to look at the larger US-Korean-Filipino triangle instead.

At the frontline of climate change

– I did get a glimpse here into what it actually means to be at the frontline of climate change and to live with so much risk and danger on a daily basis. To many of my informants here, typhoon Haiyan has hit home how real the dangers of global warming are for the Philippines. Subic Bay was not directly affected by this typhoon, but with most of the communities that I look at located close to the shoreline, climate change and the effect it has on the world’s oceans are a matter of daily concern.

– There are many other things that I could mention like listening to a woman of Aeta-origin explain to me how much she longs for the times when the U.S. military was still around (she is from an indigenous community living in the mountainous rainforests of the old U.S. naval base) or the eerie silence at an abandoned Buddhist temple within the confines of a former refugee camp in Bataan. Up to 18.000 Southeast Asian “boat people” at a time had lived there once, people who had been dislocated during and after the Vietnam War and who found temporary shelter at this camp before making their way to the West.

– Very good. It is great to stay in touch with each other via our online platform. I feel like we are having some very good discussions that are not only laying the groundwork for later collaborations, but perhaps also aligning our interests, ensuring that we use a similar conceptual apparatus to think about our field sites.

– Chinese New Year is this Friday, so we are planning a nice evening with some Korean friends of ours, and I hear there will also be a dragon dance in Olongapo, the city we live in now. Next week? There’s a long list of people I would like to meet, places I would like to see, but I also have to see what comes up, because you really have to leave some space for surprise during field research, and see where the unexpected moments of your day take you.

Letter from the field