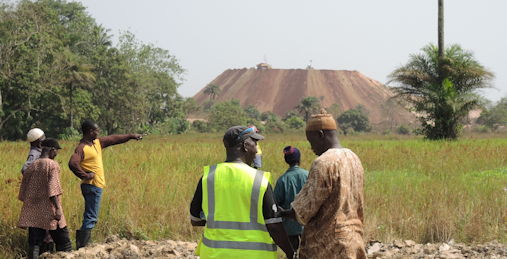 Who gave land to whom, when and why? Discussing internal boundaries in a village on the mining concession. For the mining company, in order to be able to provide  compensation and to facilitate the resettlement process, village boundaries need to be demarcated. Photo: Robert Pijpers

– Where are you now, what are you seeing when you look around you, and what sounds are you hearing?

– I am currently sitting in front of my house in Mabesseneh, the village where I live. Night is falling and it’s getting dark. When I look around me I see a poda poda, a small public transport bus, parked at the house opposite of mine. Some people are watching a movie on a portable DVD-player, a Nigerian movie telling of witchcraft, corruption and adultery. I hear the sound of generators, a monotonous and loud roaring. Occasionally some comments are made about the movie and some people are shouting around. Every now and then a friend of mine passes by to say Hello and talk.

– That is hard to say. I knew the area very well already, so I also had a clear idea of what kind of situation I would find myself in: a poor environment that is changing and developing rapidly, if you take the improvements in infrastructure and the increase in economic activities into consideration. Social and economic problems, however, remain a core part of everyday life, such as those caused by rising land prices, by the influx of people looking for jobs that are not actually there, or by the limited freedom of movement.

– But fieldwork has turned out to be more interesting than I expected, both in terms of information and stories and in terms of access. I can equally speak about the same topic with local authorities such as councilors or chiefs, as I can with the CEO of a mining company, or with a ministry employee, or a motortaxi driver. But there are also parts of society to which access is difficult. This applies mostly to the activities of the secret societies in Sierra Leone: the Poro for the men and the Bundu for the women. These societies are somehow hidden, everyone knows about them, but what exactly happens within the society remains unclear to outsiders. Although there are people that claim that the societies are becoming less important, their influence still reaches far into everyday life.

– At the moment this would be the boundary demarcation undertaken by a group of consultants in a village that will be resettled due to the mining activities in the area. For the mining company, in order to be able to provide proper compensation and to facilitate the resettlement process, village boundaries, both external as well as internal, need to be demarcated.

– This process triggers many conversations between villagers themselves, such as discussions about “who gave land to whom, when and why”, or “was the land given for temporary use or permanently sold”, as well as discussions between consultants and villagers, or between company, consultants and villagers. To walk through the landscape with a group of people and to see who talks, who decides, who is present and who is not present, and to hear what the discussions are about gives me a lot of insights into village history and hierarchies as well as land tenure processes.

– Another event that is drawing our attention is the Ebola outbreak in neighbouring Guinea and Liberia where about 110 people died (that we know of). Since there is a very intense interaction and high mobility between Sierra Leone and Guinea, this is something to keep an eye on. 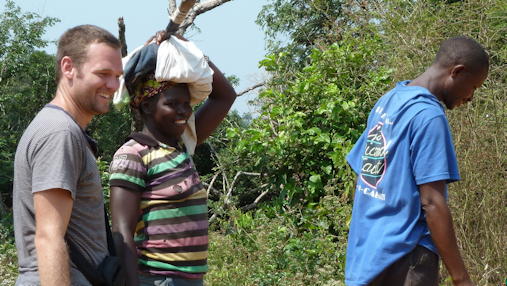 – Mining is one of the core topics you wrote about in your first field letter. It is also an important topic in Thomas Hylland Eriksen’s research. Have you found connections between Sierra Leone and Australia?

– ”West Africa, the new Pilbara?” is the title of an article I came across on the website miningaustralia.com: “As the resources boom slows down in Australia and iron ore prices tumble, West Africa’s untapped resources are drawing eyes away from the Pilbara”, it says. (Pilbara is one of Australia’s most important ore mining towns.)

– Connections certainly exist between different mining areas in the world. Environmental changes, economic shifts or the heritage of mining industries are topics that play a role everywhere. But it is also important to see the differences. Challenges and priorities in Australia where one can find a Dutch food shop with solar panels on the roof in addition to the national electricity grid are likely to be different from Sierra Leone, where having enough to eat can already be a daily concern.

A permanent state of crisis?

– What are the most interesting / important things for you that you have learned about Overheating and the three crises of globalization at your fieldsite so far?

– Overheating and crises are relative things. The changes that occur here and that could be considered radical within the local context might be part of everyday life in another country. Besides, the hardships of everyday life for the majority of the people in Sierra Leone could in some ways also be framed as part of a permanent state of crisis.

– Thus, it is necessary to continue thinking of what crisis exactly means and also how people use the concept. Is there really a crisis going on or do people use the concept strategically? Here people often express their hardships and problems with a reference to the future: perhaps expressing our problems will contribute to a better future – this seems to be a way of reasoning. Things are sometimes said to be worse now than they were in the past, but are they really? Ethnography might answer many of these questions.

– With all this focus on crises, have you also encountered signs of the opposite, something that gives hope etc?

– To speak of crises in a country that has experienced a ten-year long civil war and that is currently changing so fast seems a bit disproportional. Instead of a site that’s in crisis, I prefer to see my field as a site of accelerated change, where (perhaps over)heating occurs.

– When I visited Lunsar in 2003, right after the war, this area was almost a ghost town. Now there are public facilities like water pumps and solar lights along the main roads, restaurants and shops have opened and people are investing their money in the construction of houses. Over the past years, life has been brought back to the area and money is clearly flowing. This may sound like a strange example, but before, say, 2006/2007, there were so few cars around here that everyone knew which car belonged to whom. Now you can hardly tell anymore.

– In the coming days I will visit different areas in and around the London Mining concession, and talk to people living and working there. In one village I will try to record its organizational structure, which will allow me to understand the importance of different groups in the village. Also, I will be attending a district Council meeting and will speak with the Paramount Chief of Marampa Chiefdom, Bai KobloQueen II. Next week I will visit Freetown, the capital of Sierra Leone, to speak to several policy makers and NGOs, and after that I will spend some time in an area that has been leased by a biofuel production company.

– Then I will be acting in a movie called Community Crimes. I have a small role as a white drugs dealer, who also owns a night club. The shooting will be during the next days. Besides, I have to start organizing the repairs on my roof as it is leaking and needs to be fixed before the rains come.

Letters from the field:

Lunsar: expectations in a changing environment