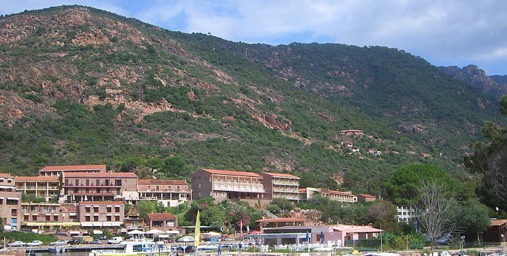 “I could have earned a million euros by selling my land, retired and lived a good life, but instead I am struggling financially. I am not doing organic farming for the money.”

Only few farmers have made the same decision as this elderly man who anthropologist Marie Stormo Nilsson met during her fieldwork in Corsica.

Many farmers have sold their land to entrepreneurs instead who would like to build hotels and holiday homes on it. The growing tourism sector has made land prices skyrocket. More tourism in Corsica means less space for agriculture. This means that young people who want to start up organic farms are struggling to find land. 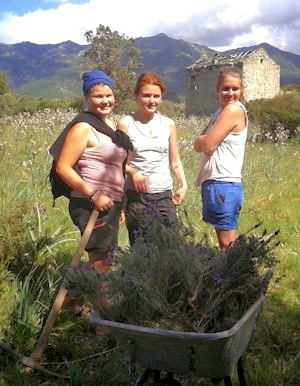 – Last month I’ve been with a lot of young people who have been searching for land to establish organic farms, but it is very difficult to find land to cultivate. Land owners don’t want to sell to farmers, they prefer to keep the land in order to build hotels and apartment complexes on it, because this is economically more viable. The relationship between tourism and agriculture is a very difficult one, Marie Stormo Nilsson explains.

Amongst the top of organic agricultural regions in France

The master’s student, based at UiO’s Department of Social Anthropology, is currently on fieldwork among people who are trying to tackle some of the environmental crises affecting our overheated planet, namely, organic farmers. Nilsson has recently finished her research at the fourth farm she visited during her stay and is ready to return to Norway. She came to Corsica to find out what it is like to be an organic farmer. And: What are the challenges they face?

Corsica is a special place. The so-called “Island of Beauty” is often described as one of the last remaining unspoiled corners of the Western Mediterranean. Large stretches of its coastline have still been spared from the construction boom affecting other areas of Southern Europe. Its topography, with many hilltops and few plains, makes it unsuitable for industrial agriculture.

It is also a place where young people - in contrast to many other locations - are still interested in farming, especially organic farming. Corsica ranks amongst the top of organic agricultural regions in France.

Corsica - "one of the last remaining unspoiled corners of the Western Mediterranean". Photo: pierpeter, flickr

But the growing tourism sector has become a major threat, and many farmers have already given up.

This leads to paradoxical consequences, the anthropologist learned.

– In supermarkets you see lots of products labelled as “Corsican”. But there are no longer enough farmers left to actually produce local goods, so supermarkets import industralised products and sell them aslocal. It’s somehow ironic because the tourists, in particular, tend to be interested in local food, she says.

– Tourists and farmers are also living in two different spheres. We had an open day at the farm during an organic festival where everybody could come and learn about food. It was mostly locals who showed up, though, hardly any tourists.

To continue farming in such a climate is a clear value choice, she stresses:

– The organic farmers in Corsica represent a kind of counter-culture. They are trying to live their life differently, more in touch with nature. They are a minority and they are struggling. They are very brave. For example, the last farm I stayed at was run by a single woman, all alone.

The organic farmers that the anthropologist met were driven by a different way of thinking about food and farming. One farmer, for instance, questioned the meaning of the term “organic farming”:

– Also, he reserves the name «tomatoes» for organic tomatoes only, all other tomatoes he calls industrial or petrol tomatoes. It is normal amongst these people to know where the food they are eating is coming from and to talk about it, too, she adds. 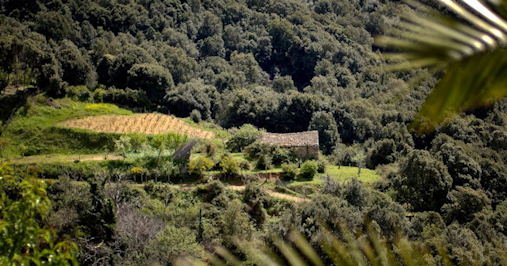 Corsica's topography, with many hilltops and few plains, makes it unsuitable for industrial agriculture. Most farms are small. Photo: Gisle Vestergaard, flickr

– The financial crisis and the pressure it has put on the value of land makes it very difficult to live the way the farmers want. While the organic farmers are trying to cool down our overheated planet, our economic system is often preventing them from doing so.

The conflict over land has not only been a major issue for farmers. It has also fuelled the nationalist and at times violent separatist movements in Corsica who have been seeking greater autonomy for the island since the mid 1970s. The land issue has also given rise to unusual alliances, as the Guardian noted in 2009 already in an article with the title “Armed separatists and ecologists unite against fears of a paradise lost”.

"Paradise lost" refers to the Corsican coastline that is “developed” in order to build holiday homes. Holiday homes owned by residents from mainland France and by foreigners now represent up to 40 percent of all Corsican real estate.

Already in 2006, a nationalist leader suggested that anyone buying land or property should have to prove that he or she has been a permanent resident on the island for the last 10 years. A few months ago, in April 2014, a law was actually passed, which has it compulsory for people to be permanent residents for a minimum of five years before they can buy property on the island.

For the anthropologist, these links between land speculatation, nationalism and separatism are interesting and will be part of her thesis, although they haven’t been a dominating topic during fieldwork.

The researcher is not sure, however, if the new law will be of any help for her informants looking for arable land:

– Most of the land is already sold. The fight is mostly about construction permits versus the permit to use it as farm land now. The fight over actual land ownership is already over.

The nearing end of small-scale farming: Result  of a global crisis of desire?