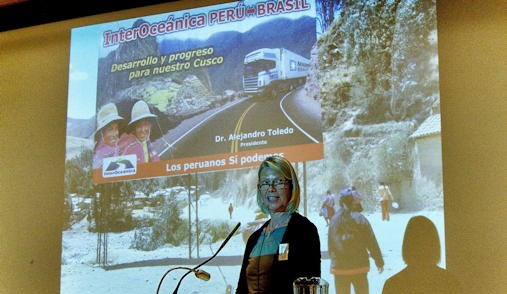 Penny Harvey: "The story about the interoceanic highway is also a story about overheated expectations." Photo: Lorenz Khazaleh

The pioneer in the anthropology of roads was one of the speakers at the conference Regimes of Temporalities at the University of Oslo. While anthropologists traditionally have studied small communities, Harvey decided to go on fieldwork on a road in Southern Peru.

Together with her colleague Hannah Knox she wanted to find out what happens when remote villages get connected to an intercontinental highway: How does the road project transform daily life? Will the road fulfill people’s expectations and lead to a better future?

After having issued a special issue about Roads and Anthropology in the journal Mobilities (together with Dimitris Dalakoglou), she and Hannah Knox are about to publish a book with the working title “Roads: A Material Anthropology of Political Life in Peru”.

– What is so special about anthropology and roads? What is so exciting about studying roads?

– Well, anthropologists have an interest in drawing things together from different perspectives.

– Anthropology has been criticized for studying tiny little villages. But I would say we were never really studying little villages. We’re used the village as a space to think about how human beings live in the world.

– Roads are just offering us a different kind of dymnamic space. They give us a chance to think empirically about what global circulations look like on the ground. We look at historical, political, economic, personal and many other relations along the road.

– There are for example interesting studies on Chinese road construction globally. Road construction is one of the ways China is implanting itself in different economies around the world. There are also many religious activities: How do people deal with death on the road for example? Or if you’re travelling in trucks in Latin America, you’ll find that they’re full of Christian iconography.

– I don’t think of it as multisited fieldwork. A road is actually a continuous space. I use the image of the topological, the idea that things can stretch and move and yet have an identity. It’s nice to think about the road through this kind of imagery because I’m interested in the continuities rather than that sense of jumping around from site to site.

– My hope is that this ethnography of roads and infrastructure in general is allowing us to see what it is that underpins the ways in which we carry on our lives without even thinking about it.

– One of the people I referred to in my talk at the conference is AbdouMaliq Simone. He talks about infrastructure as something that is in between us. I like that expression because this “in between us” might connect us or it might disconnect us, but it is there, and we’re not necessarily paying it much attention, but it’s very active in our life, it shapes lives!

Connecting the Atlantic and the Pacific coast: The Interoceanic Highway in Peru

The longing for movement and money

– This can also be seen in the road you studied, the Interoceanic highway that connects the Atlantic with the Pacific coast?

– Yes. For at least 70 years, people in the parts of Peru where I’ve done fieldwork were longing for the possibility of new connections. It is an area of Peru that is far away from the coast and that has been highly neglected, although it is a potentially rich area with both gold and timber. There has always been the idea that you could make your fortune there, like in the American West.

– The problem is that when you find gold or timber you have to get it out. But how? The river flows away from Peru’s major urban centres. People felt a proper road would help them. People went on hungerstrike, they chained themselves to bridges to stop the traffic to show that they want to be part of the economy. To show what a road means, and to show “I want to be part of this”.

– People really think a road brings better life. Roads are seen as an expression of care from the state - in the same way as a school or a health post. People would protest against roads if they are built in the wrong place. They sometimes take quite drastic measures to get the road to come right past their front door - quite opposite to many places in Europe. The story about the road is also a story about overheated expectations.

– In the news you mostly hear of protests against roads, especially when authorities plan roads through the rain forest?

– Has the road project lead to “overheating”?

– One acceleration that took place is related to gold extraction. When you open a road you open a frontier. The road enables people from all over Peru to get further into the areas where they hope to find gold. Gold extraction is environmentally very destructive. The miners use mercury to process the gold dust. Mercury poisons the rivers. 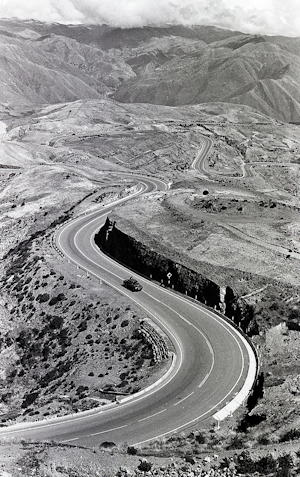 "When you open a road, you open a frontier": The Interoceanic Highway in Southern Peru. Photo: Dubes, flickr

– Artesanal mining is completely unregulated there and really conjures images of the “Wild West”. Although the state built the road, it never really had a real presence in this Amazonian region. Violence, robbery, and prostitution are common.

– While the road also built the economic possibilities for settlements along the way - and some became significant towns like Puerto Maldonado - there is the fear now that it is Brazil rather than Peru that is going to profit from the interoceanic highway.

– While people campaigned for the road, the Brazilian government was looking for a route to China. A route through Peru to the Pacific would provide them easy access to the Chinese market for their soya products. In 2009 China overtook the United States of America as Brazil’s largest trading partner .

– The Brazilans made a double business: They lent money to Peru for building the road and it was also a Brazilian transnational construction company that built the road. In the capital of Peru, Lima, many people think that this road is only going to help Brazil and not Peru. Peru is just going to be paying a massive debt for many decades to come.

– The Brazilian company that builds the road will control the road for 25 years! For 25 years they are responsible for maintaining the road. They also have the possibility to charge tolls on the road. They can if they want to, because although it’s a public road, it’s under control of a private company.

– Something like this had never happened before. What is public space then? This has become increasingly unclear. There are lots of social movements and protests about ownership of public space, citizen rights, and management of resources.

– Thomas Hylland Eriksen wrote in a newspaper piece that it’s not immigration that is changing Norwegian society, but neoliberalism. The road project is also an example of neoliberal change?

– The final irony is that the Brazilians are now more worried about water than anything else. Now they are planning a huge hydroplant right where the road is. It is claimed that 100 km of the road will be covered by water once the Inambari dam is built.   It is uncertain that this project will happen, it is very controversial. A lot of people would have to be moved to build the dam.

– So, if you think about what the interoceanic highway was all about, maybe on one level it was about building high level relations between the Peruvian state and Brazilian capital. The road was just about creating this relationship, and now they can do a serious energy project together. That may be cynical, I don’t have any proof for that. But people in Peru are discussing this as a possibility.