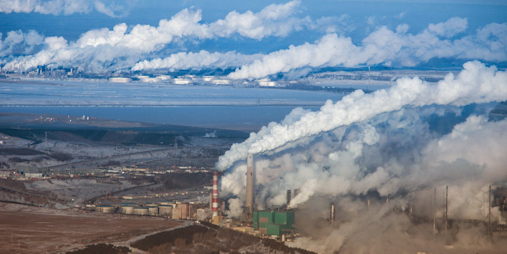 Not only environmental concerns: Poverty, the unequal distribution of wealth, and a lack of infrastructure are often more important to Lena Gross' informants in the tar/oil sands boom areas. Photo: kris krüg, flickr.

– Where are you now and what are you seeing when you look around? What sounds are you hearing?

– I am in Oslo on a small break from fieldwork. It feels strange to be back in Norway, it is so much warmer and there is so much less snow here and I am really enjoying the sound of the streetcars that I hear through my office window. We missed public transportation so badly in Lac La Biche. I am already looking forward to being back in Canada, though it is nice to have a break from fieldwork, which allows me to get order into my thoughts and experiences so far.

– What have you been doing in Canada?

– I have been looking into the changes Lac La Biche, a small town in Alberta, Canada, is experiencing through the oil/tar sands exploitation development in the area. The oil/tar sands in Canada hold the world’s third largest oil reserves, and as a consequence, Canada is starting to view itself as an energy superpower. The industry is relatively new and has changed the whole area tremendously.

– While Fort McMurray has been at the heart of this development, Lac La Biche has been more at the edge of it. With the expansion of the industry, but also through the influx of workers and a huge increase in traffic, the boom seems to have reached Lac La Biche County, too. 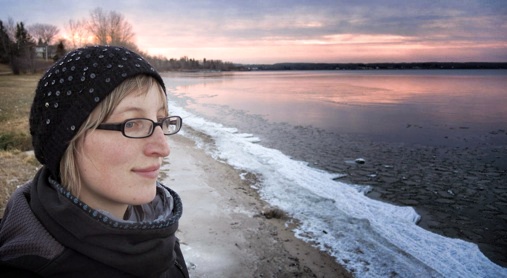 Lena Gross: "I was impressed how involved individuals were in making Lac La Biche a home, also for the newcomers." Here at Lac La Biche Lake. Photo: private

– What are some of the interesting things you have learned about overheating and today’s economical, ecological and cultural crises so far?

– For me, before I came to Alberta, the environmental crisis was by far the most urgent, but I cannot say this anymore.

– Reading about the tar/oil sands extraction and its environmental impact on wildlife, water and air quality, but also about Canadian environmental politics gave me a sense of high urgency and somewhat also of despair. While being there, I still have had these feelings, but I have also witnessed that what local people struggle with the most are not these environmental issues. Poverty, the unequal distribution of wealth, and a lack of infrastructure are often more important to my informants.

Living in a boom area

– Can you explain that?

– These are the social consequences of living in a boom area that are often experienced as the most urgent: How do you keep up an infrastructure, when the population suddenly explodes? Who pays for the extra doctors and nurses, when the hospital is suddenly used by far more people than its original capacity would allow? 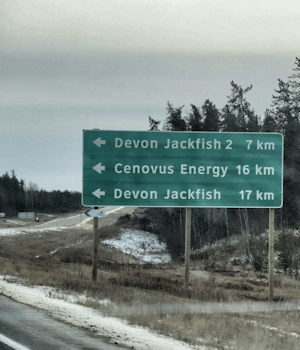 – Who is responsible for the mental care of the many, many workers who come from far away, and who struggle with the isolation in the camps, the harsh working conditions and the separation from their families and friends? How do you attract good teachers and doctors, when their wages are not high enough to keep up with the costs of living?

– Living in a boom area is extremely expensive, especially when you are not part of the boom. It is hard to be concerned about climate change when you don’t know how to feed your family the next day.

– Housing prices, and the cost of living in general, have risen to extreme levels, while the value of non-oil-money has stayed just the same. Wages made in non-oil related industries are suddenly not enough to lead a good life anymore and people working in the health, social or educational sector think twice before moving to such an area. This creates a scarcity, not only of affordable housing, but also of professionals in these sectors which are absolutely crucial to sustain a healthy community.

– In such a cold place, with about six months of winter, having a warm place to stay in is absolutely crucial for your survival. Homelessness is a huge threat for people who lose their jobs, or suffer from an addiction.

Proud of its diversity

– With all this focus on crises in this project, have you also encountered signs of the opposite, something that gives hope?

– Lac La Biche is an old, well grown, cohesive community. Many people I talked to cared deeply for their community and there is a lot of fundraising and volunteering going on. I was impressed how involved individuals were in making Lac La Biche a home, also for the newcomers. The area has a strong history of multicultural interactions. Lac La Biche has one of the oldest mosques in Northern Canada; there is a White Russian old-believers settlement outside of town, and there are of course different native groups living in the area. People seem to get along nicely and are proud of this diversity, at least most of the time.

– It also looks like there is a revitalization of Cree and Métis languages, crafts, and other traditions. One woman told me that ten years ago she didn’t want to hear anything about her native heritage, but today she is very proud of having a Métis grandmother and stands open to it.

– An encounter which really influenced my fieldwork was the invitation by a friend and informant to stay at her house on the reserve close to the town of Lac La Biche for the first month of fieldwork. Her family openly welcomed my family and I, and I learned a lot from them about native history, indigenous politics and what it means to be native in Canada. They also made my entry in the field much easier and made me enjoy this initial time I spent there way more than I ever had hoped for. 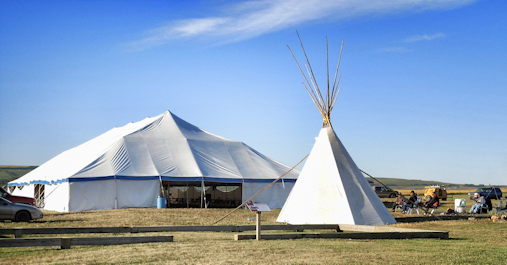 Treaty meeting: In the eyes of many native Canadians, colonialism is an issue that is far from over. Photo: Lena Gross

– What have you learned? Some examples?

– My friend’s parents took me to a treaty meeting. The Treaties are agreements between the British Crown and the Aboriginal people of what is Canada nowadays, which cover questions such as aboriginal rights and land use. During this Treaty meeting, it was emphasized several times that an agreement consists of at least two partners, and that there are not only “Treaty Indians”, but also “Treaty Whites”.

– I think that non-aboriginal Canadians often see Treaties as something that only concerns native Canadians. There is little awareness about the meaning of the Treaties for everyone living in Canada. Living on this land comes with a duty. Given that there are so many immigrant groups here who left their home countries because of unfair conditions there, it should be a question of respect not to reproduce these conditions in Canada then. In the eyes of many native Canadians, colonialism is an issue that is far from over. If you look at the education funding gaps that reserve schools face, the housing crisis in many indigenous communities, and at life expectancy and well-being in general, it is hard to argue against this notion.

– And generally speaking: Has fieldwork been as expected so far?

– I had a hard time to visualize my fieldwork before I left, and I tried to expect as little as possible.

– I still found myself completely overwhelmed by the beauty of the land and the generosity of one family, in particular, when I arrived. The sky was so big and the land so flat, the distances great and everything was so staggeringly huge. I actually took photos of the huge trucks I saw everywhere, very much to the amusement of my host, as I just couldn’t believe that even the cars were that much bigger.

– I also was very nervous about bringing my family with me. But this turned out to be much better than I ever hoped – my partner helped me a lot with my research and my daughter opened some doors for me as well. Through having her with me I met a lot of stay-at-home mothers and could easily participate in the many community events held for families in the area. 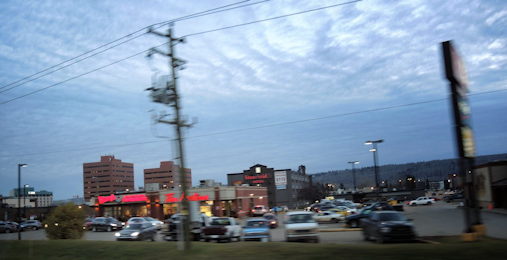 – I actually enjoyed it a lot. It usually gives me a rewarding break when I read and think about the other experiences and encounters. I wish I could visit all of the other participants in their field sites as I do have quite a vivid imagination of these places by now. Several times the writings of my colleagues inspired me to ask other questions or to talk to my own informants about something that was going on in their fieldwork.

– What connections do you see to the other projects?

– There are many foreign temporary workers from the Philippines working in the oil/tar sands, so it was very helpful to learn more about the Philippines through Elisabeth Schober’s project. She researches labor issues, which are very important in my project as well. When I visited a camp (temporary homes for oil/tar sands workers provided by their employers in the middle of the bush) I saw a Hanjin container. That was really interesting for me, as it was a visible sign of the interconnectedness of these far-away places (Hanjin is the name of the conglomerate that owns the shipyards in South Korea and the Philippines that Elisabeth researches on).

– Thomas Hylland Eriksen’s project in Australia seems to be the one that’s the most similar to mine. Australia and Canada have a parallel and sad history with their indigenous populations and we are both in a boom area faced with comparable challenges. Extractive industries seem to create very similar circumstances for the local population, wherever they go.

– Wim van Daele looks at food and we have all encountered situations where we suddenly understood something through the help of food. It is also a very interesting topic for comparison and many other topics are interconnected with food. I wasn’t thinking too much about it before I met Wim, but now I definitely want to have a deeper look into the meaning of food. And I like trying out and learning about new food, so that works very well for me!

– Astrid Bredholt Stensrud and I share our interest in water and climate change, and nearly everyone in the project has had some crazy experience with traffic and the local road conditions.

– What are your plans for the coming days?

– I am planning my second half of fieldwork and hope for slightly milder weather conditions, as it was around –40 degrees Celcius when I left. There was also a storm after our departure, so I hope our house is intact. Packing is another big deal – it is a very long and tiring journey to Lac La Biche and winter clothes and heavy books are not exactly helping you to travel light.

The Good Life and The Oil Industry. Stories of «the good life» in Lac La Biche, Northern Alberta, Canada

Letter from the field: