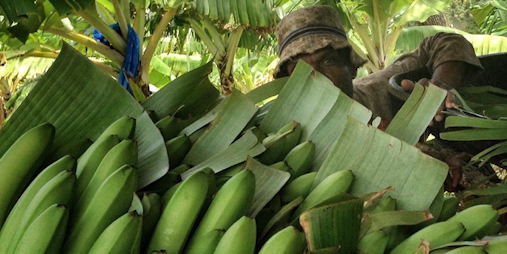 – When I came to Dominica six months ago, 130 farmers were part of Fair Trade, but at the moment only 34 farmers are selling to the company. Fair Trade means a lot of restrictions, requirements and stress, farmers told me. And they need to write lots of reports while some of the farmers aren’t even able to write, she says.

– The production on the island is really low right now. The farmers are struggling with a disease which completely destroys a lot of the plants (“black sigatoka”). The inputs, the stuff they need at their farm (especially fertilizer), have become very expensive. So for many farmers it’s hard to maintain their farm and keep up with the standards that Fair Trade requires.

The master student in social anthropology from the University of Oslo is sitting in her hotel room in St. Lucia where the closest international airport is located. Six months’ fieldwork on the neighbouring island Dominica are over, she is ready to travel back to Norway.

What is it like being a banana farmer today? How do they perceive and deal with the situation that they are in? These are the questions that the Overheating-researcher would like to answer in her master’s thesis. 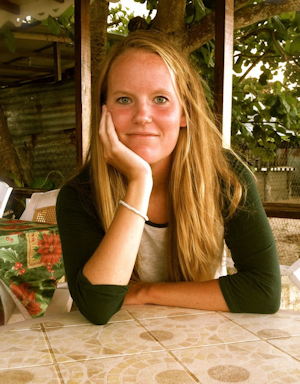 Frida Aamnes: "It seems that small states like Dominica have less and less to say." Photo: private

Bananas are the world’s most exported fruit. With economic wars having been fought over bananas, the banana trade has become a highly politicized affair. Production, profits, and market access are highly concentrated. Less than a handful multinational companies are dominating the industry. Small banana farmers often work and live in difficult conditions.

Dominica is a good place to study these issues.

Until 1993, Dominica and its surrounding Windward islands St. Lucia, St. Vincent, Martinique and Grenada had preferential access to the European markets and farmers could sell their bananas at a good price. In the beginning of the 1990s they supplied 2/3 of the bananas available in the UK.

But under pressure from the US, WTO and low-cost producers in Latin-America (Dole, Chiquita etc.), farmers in Dominica gradually lost their protection from 1993 onwards. By 2000 Dominica and the Windward islands  supplied 19% of the bananas in the UK, nine years later only 9%. Without regulations, they have been unable to compete on a global market.

“Before we were able to buy things, now we’re just surviving”, farmers told the anthropologist.

For farmers who chose to continue, being part of Fair Trade seemed to be the only option. Within Fair Trade farmers are guaranteed among other benefits “fair” (higher) prices for their products. By 2000, nearly all farmers in Dominica had joined Fair Trade.

But now most of them have left Fair Trade again. Some have started producing for the less restrictive regional market instead, they started cultivating other crops and are hoping for income through branches like ecotourism.

The transition to the Fair Trade regime has for most farmers been more challenging than expected. The changes that Fair Trade required were too big, their rules differed too much from local practices, and communication about these changes has been inadequate - at least according to the farmers.

– When Fair Trade came the farmers completely had to change the way they work, the Overheating researcher explains.

– I talked to the president of Winfa which is the Windwards islands farmers’ association. She said the biggest problem with Fair Trade was that the farmers didn’t really get training in using new practices. For you can’t just jump into it without really knowing why Fair Trade for example requires providing a toilet on the farm.

Dominica: Rather tourism instead of banana trade? Photo: Frida Aamnes

Furthermore, the farmers feel they don’t get enough support and help from the authorities. The authorities, on the other hand, partly blame the farmers for the decline of their traditional banana trade, the anthropologist explains.

According to them, the farmers are not committed enough to their work. The way out of the crisis is being more business-minded.

– The agriculture minister did not use the word lazy but what he said was that you can give the farmers all the help that they need, but some of them will nevertheless stay unproductive. He said, farmers have to be more committed to their work. He also partly blamed the farmers for the spreading of disease on the plants - they are a result of “wrong work practices”.

– He criticized that there has developed a kind of culture in which farmers spend four hours on the farm, then they go to the coffee shop and play dominoes and have a drink. He says farming requires a lot more work, farmers need to be more serious and more business-minded.

“Farming a way of life, not a business”

For the farmers, most of them in their 50s and 60s, the required business attitude might crash with the way they look at farming, the anthropologist thinks:

The authorities are hoping that young people will bring change to the local farming traditions. The government wants to educate young people so they can pursue agriculture in a scientific way and in a larger scale than their parents.

But if these young people do exist is an open question.

– I haven’t met any young people that really were interested, they prefer to be doctors, artists or lawyers but not farmers. And most of the farmers don’t encourage their children to be farmers, the researcher says.

A small island state and the world

So what now? Does this mean the end for small-scale banana farming in Dominica in the long run? And: ”Banana is dying, so is Dominica dying”? What can we learn from Dominica’s banana farmers about the state of the globalised world? Is this a world where small states like Dominica have less and less to say? 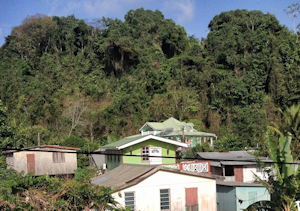 In short time, when Frida Aamnes will be at home in Oslo again, it will be time for analysis and writing up.

She can not complain about any lack of data. The farmers have been happy to talk to her.

– In the beginning it was strange, though. You just walk in the street and you don’t know where to go, wondering how to get going and make contact with people.

– But in this situation the Caribbean is a good place to be. People are easy to get in touch with. They even thanked me for listening to their stories - although it was me who should be most thankful, she says and continues packing her suitcase.