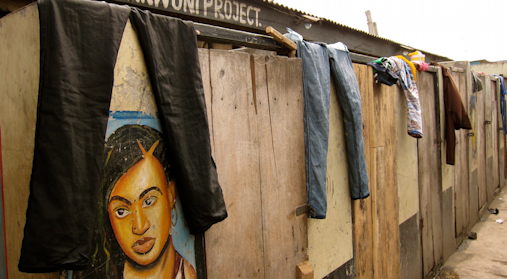 Viewing glocal crises through existential concerns like the need to relieve oneself: Politicians want to evict the slum dwellers, local activists build public toilets in the slum  instead. Photo: Shack Dwellers International, flickr

Sodom and Gomorrah. This is the not very flattering name of the slum in Accra where the anthropologist from Malmö University has just started his fieldwork project. It is a highly overheated place where many of today’s crises come together, Stade explained at a recent Overheating seminar.

Sodom and Gomorrah (called Old Fadama by local activists) is located next to one of the most polluted waters on earth, Korle Lagoon.

Here, discarded computers and mobile phones from the wealthy West mix freely with wastewater from a nearby mortuary, sewage from Accra’s households, untreated effluents from chemical industries and with the ‘flying toilets’ by slum residents and others who have no other choice than using plastic bags to relieve themselves into, which they afterwards hurl into the lagoon. Together all these ingredients produce a smell that can be enjoyed a long way away.

A hotbed of crime, vice and violence?

Although their contribution to the pollution is rather marginal, it is the 80,000 residents of Sodom and Gomorrah that media and politicians hold responsible for the dirt, pollution and all the other problems. Sodom and Gomorrah is routinely portrayed as a ‘no-go zone’, a hotbed of crime, vice and violence.

That’s because many of the slum residents are from the poorer northern parts of the country. According to widely held prejudices this means that they are backward, uncivilized, dirty and violent. Furthermore, the anthropologist explained, most of them are Muslims and as such are seen by the majority population as alien elements in the Ghanaian nation. 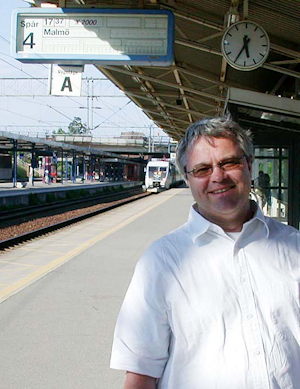 The slum dwellers are under constant threat of eviction – either by international attempts to restore the ecology of the lagoon or by plans by the Ga, an impoverished local linguistic group, to repossess the area, of which the Ga claim ownership.

The majority of local and international bodies, such as the United Nations Centre for Human Settlement (Habitat), seem to agree that the pollution can be solved by teaching the slum residents ‘environmental hygiene’ so that they are able to ‘take responsibility for the urban and natural environment’.

The main problem of the slum residents – the lack of public toilets – is not addressed in official arguments for improved sanitation in Accra.

Defecating can be a daunting undertaking in Accra where only 16 percent of the population have access to flush toilets, Ronald Stade pointed out.

– Many are those who in the early morning hours make their way down to the beach to relieve themselves. Finding a secluded — or even a not so secluded — spot after nightfall can be hazardous. The risk of assault and rape is very real. Well-lit public latrines provide more safety in this situation, but access is made difficult because of long queues.

Connecting the need to go to the toilet to global analysis

So why are there no toilets? What do you do when you feel that you have to go to the toilet, but there is none? Where does human waste end up? What are the politics surrounding it? What is the connection between squatting and squatting, between human waste and humans as waste? And what shall the anthropological response to these issues be?

These are the questions that Stade is investigating in his new research project.

– I want to connect something essentially human like the need to go to the toilet to global analysis, the Berlin-born researcher explained at the Overheating seminar.

Stade’s interest in ‘the essentially human’ is inspired by humanistic perspectives – perspectives that affirm some notion of a "human condition".

He is no longer convinced – as he was during his student days – that understanding the world through studying cultural differences is the way to go.

– Anthropologists have argued for many years that it’s not so interesting that everybody is born, lives and has to die. The more important thing is how people deal with birth, growing up, growing old and dying.

– As a student I was fascinated by this argument. But now after a long career as an anthropologist I realise that there is something more to that story. This thing is called humanity. Human commonalities are just as important as human differences.

In a piece in Anthropology News, a publication by the American Anthropological Association, he went so far as claiming that, ‘As long as cultural differences between groups of human beings are at the heart of anthropology, the discipline and profession will be a burden to humanity’. In a paper in the journal Social Anthropology he postulated that ‘The days of ‘the Nuer’, ‘Muslim women’, ‘Europeans’, and other categorical designations of human beings are over’.

The dangers of a focus on cultural differences are obvious, he explains:

– If we try to find a cultural reason for why people live in a slum like Sodom and Gomorrah, we will end up supporting the view that these people are very different from the Akan majority population and therefore represent a problem.

– First of all this is not true, that’s one point. The other is that all human beings have to go to the toilet, it’s something human. The slum dwellers can’t really do very much about their bodily needs. We have to consider that they are human beings like us. 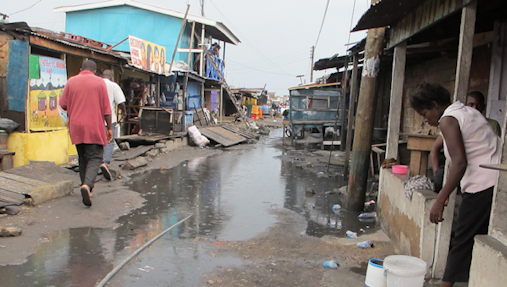 Stigmatized as dirty, backward and violent: The slum dwellers are under constant threat of eviction. Photo: Shack Dwellers International, flickr

Diversity in the context of the human condition

Through viewing glocal crises through existential concerns like the need to relieve oneself, Stade wants his project ‘to strike a balance between human commonality and human diversity’.

Stade is currently writing an article for the journal Social Anthropology together with Nigel Rapport about ‘what anthropology could be or should be’. He suggests that anthropologists should tone down adjectives like ‘social’, ‘cultural’, ‘biological’ or ‘physical’ when referring to anthropology, and rather focus on anthropology as anthropology, as knowledge about human beings and being human.

– I am interested in the legacy of humanism, he says.

– If there is anything that can be rescued from this legacy, he adds.

For humanism, he explains, has been criticized partly for many good reasons. Critics like the posthumanists say there is no human nature, everything is dependent on context, circumstances, upbringing, culture.

Anthropology could give interesting answers

But there are projects in the humanist vein that Stade finds interesting to debate – one of these is Martha Nussbaum’s idea of human capabilities, which she shares with Amartya Sen.

– Nussbaum’s point is that there are certain basic capabilities that are universal, that in effect represent a kind of human nature: we need to eat drink, sleep, but we also need to do things like playing, liking someone etc. Nussbaum might not like this description, but to me, this is an attempt to rescue humanism. She is trying to build a strong political and moral argument based on some notion of human nature.

– And I think if anthropology would tone down adjectives like ‘cultural’, ‘social’, ‘biological’ and ‘physical’, it could give interesting answers that could be an alternative to Nussbaum’s capability approach, Stade says.

In a global neoliberal vein

Meanwhile, in Ghana, the mayor of Accra, Alfred Oko Vanderpuije, is continuing his public health and safety programmes in a global neoliberal vein. He is registering every Accra resident and is introducing a surveillance system, which according to Stade effectively targets the poor.

In order to clean up the city, the mayor tries to rid the roads of hawkers and truck pushers.

But hawking, pushing trucks, carrying goods on one’s head is what many people in the slum do for a living, the anthropologist comments.

– Ridding the roads of poor people is a first step. Razing Sodom and Gomorrah to the ground is the next, the anthropologist says and concludes:

– It is a politics of human waste, of flushing down the waste into the bowels of the earth, making believe that it is gone because it is out of sight.