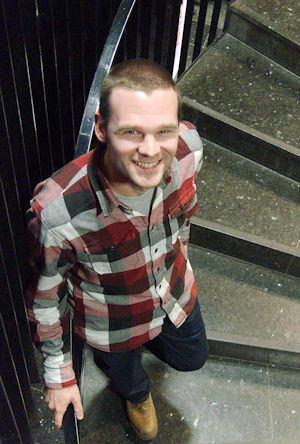 Robert Pijpers: "It is important to analyse how people in an impoverished context create opportunities and how international encounters influence these processes." Photo: Lorenz Khazaleh

Pijpers is going to travel to one of the poorest areas in Sierra Leone, where there have recently been several large-scale investments. Here, after the end of the civil war, the feeling of excitement is high. People see a future with more opportunities than ever.

This is also true for multinational companies. More and more companies have come to Sierra Leone to invest. A growing number of reports are commenting on the increase of high capital and land-intensive investments. “Sierra Leone: local resistance grows as investors snap up land”, reported the Guardian one year ago, for example.

Robert Pijpers is going to compare two major cases, two major “hot-spots” as the anthropologist calles them - two “contested spaces characterized by accelerated change and an increased density of activity and claims”:

– One hot-spot is Lunsar and its iron ore mining activities. The mines were already developed in the 1930s and have caused a big boom. People remember the positive parts of this period such as the access to water people had. In the 1970s the production started to decline, and in 1975 the mine was closed down. However, in 2006 one company, London Mining, acquired its mining license and the old mines were reopened, redeveloped and expanded. Currently, other companies and their subcontractors are moving in to start iron-ore related projects.

– The other hot-spot I’m looking at is a Swiss biofuel production company. They are producing ethanol from sugar cane. It’s a big investment which requires a large production area, more than 10 000 hectar. Besides the remarkable size of the project, another interesting aspect is that it is new to the country. There has never been biofuel production before and people have little experience with this kind of large-scale agricultural project.

– These hot-spots raise a wide range of interesting questions: What processes are triggered or enforced by investments? How do areas that are experiencing accelerated change turn into hot-spots? What (groups of) people are making claims in these hot-spots? Who gains and who loses? How do people respond to the changes they experience in their daily lives? Which possibilities and difficulties are seen and by whom? And how do people’s opinions and positions change over time?

When does heating become overheating?

– Where is the overheating in your project?

– The increasing interest in land causes an intensification. Land prices might rise, or land becomes ‘commoditised’ (turned into a commodity whereas it wasn’t before) and people might want to move away from agriculture to other sectors. People from different ethnic groups will move in and settle in order to search for jobs and money might start to circulate more intensely. New forms of land use and production are introduced, a (new) type of work ethic may be required and local interest or identity may need to be expressed more strongly.

– In my research I speak of overheating as accelerated change and I intend to critically question the ‘over’ part. When does heating become overheating, when does change become too much?

– Have there already been conflicts in the areas where you work?

– There haven’t been big conflicts, but there are some tensions in areas with large scale projects. At some places there have been strikes by employees, companies usually report quite a lot of theft and there are discussions about compensation for loss of livelihood and/or land. These tensions are of main interest, and I am eager to find out how these develop and what kind of groups are involved. When a company moves in for example there are a lot of expectations raised. After a while some people might become disappointed which may cause dissatisfaction.

Biofuel production: both promise and problem

– Where do you see the three crises of globalisation, in the realms of environment, economy and culture, that are described in the overall research project?

– In Sierra Leone, few people speak about crisis because of its recent history of the civil war. I thus try to scrutinize the concept of crisis as such, as well as the perception of crisis (which groups perceive crisis, or negative change, which don’t). But whether crisis or not, there is a lot of change in all the three domains of the research:

– Environment: The biofuel case provides an interesting perspective here because in the public discourse it is framed both as a promise and problem. At some levels, biofuel production is a way to cleaner energy and therefore a solution to environmental problems. But in order to produce biofuel you need a lot of land and when you acquire a lot of land to solve a global crisis you might also trigger a local crisis when people lose their land or have less access to land, or water. The latter position is a stand of several (international) civil society groups. The same goes for other activities that require changing the landscape, what kind of environmental developments does this lead to?

– Economy: If you look at the economy one may think about changing value regimes. The most famous examples are the commoditisation of land and labour. What happens in an area where land gets a monetary value whereas this type of value was less relevant before? What kind of challenges does this trigger and what kind of possibilities does it provide? Other examples are the increasing circulation of money or changing work rhythms and changing work opportunities.

– Culture/Identity: I wonder what effect the land-acquisitions have on how people frame their identity and sense of belonging. The influx of other ethnic groups might mean that people want to emphasise their identity. Furthermore, the arrival of investments also comes with better mobile networks and increased internet access which might influence people’s feeling of connectedness to the world. After ending a long and brutal civil war around 2001/2002, Sierra Leone moved into the 21st century in a state of cultural crisis. The search for knowledge and alternative livelihoods, the distrust towards partners and various governing systems can be seen throughout society.

– Are there any links to Norway?

– A tangible example of interconnectedness are the iron ore mines in Northern Norway. These mines have been closed for a long time but have been reopened at about the same time when the Sierra Leonean iron ore mines were reopened. Both mines draw upon international staff, such as Australian subcontractors, and have local stakes (such as environmental concerns and the need for local economic development).

– Furthermore, in terms of relations to Norway, one might also think about Norwegian aid organisations in Sierra Leone.

A country that deserves more research

– Why did you choose this topic?

– I feel Sierra Leone is a country that deserves more research. There is quite some research in Sierra Leone that focuses on the war. Although this research is important, I think it is also important to do take recent developments into account and analyse how people in such an impoverished context create and take opportunities, face difficulties and try to develop their lives and how global developments or international encounters, influence these processes.

– The current development of increasing large-scale investments in developing countries (other than mining operations) is an important one. Not only does it have an important position in national policy development as well as it receives attention from international institutions such as World Bank, IMF, various development bank as well as international NGOs, it also impacts the lives of thousands of people directly in a range of under researched ways.

– Fieldwork! I can’t wait to go and see what is happening. The area is changing so rapidly and to be able to feel and see the change will be critical for my project. I am really excited about going there and starting my field research!

– It will also be very interesting to be in the field at the same time as the other researchers in our project. Perhaps there will be some big global events occurring and it would be interesting to be able to compare local responses on a global scale. But also to be able to discuss developments in our research while we are all in the field is a challinging and interesting opportubnity. This is also a way of trying to research global connections.