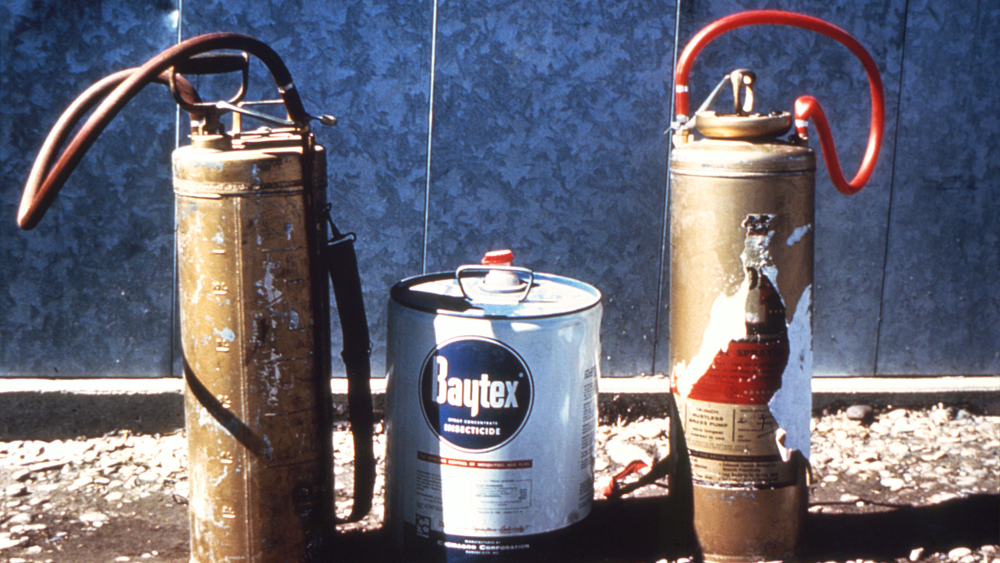 1981. Baytex, a post- DDT-era insecticide and the hand-sprayers used to deploy it, leaving traces which persist in altered ecologies and diverse perceptions of these chemicals' effects in the regions where they were used. Permission from CDC.

WP1 examines how large-scale, mid-20th century disease control programmes against vector-borne diseases that had seen epidemic outbreaks triggered by colonial changes, persist in the landscapes of Western Kenya. It studies how aspects of these interventions (against tsetse fly, onchocerciasis, and guinea worm) endure, shaping contemporary life, health and disease, and public health work. Disease control was usually organised through time-limited ‘campaigns’ aiming at disease ‘eradication’, which was rarely achieved. Campaigns against insect vectors involved vegetation clearing, resettlement and application of insecticides. This altered landscapes, ecologies and terrain, and human and non-human lives.

In the second half of the 20th century, insecticides were sprayed over large areas of Kenya, poured into watercourses, applied to animals, house walls and bed-nets, stored and spilled. These interventions to control insect-borne diseases altered settlement structure and vegetation, and left behind professionals, infrastructures and apparatus, and memories that shape attitudes to disease control. They also left invisible residuals: persistent organic insecticides sedimented in the ground and accumulated in humans, animals and plants, and are currently suspected of contributing to an emerging cancer epidemic.

To trace remains of insecticide-based disease control (IBDC) in Western Kenya, focusing on insecticidal infrastructures and chemical residuals in bodies and ecologies, and problems of their toxicity and traceability.

Which residuals remain of insecticides or pharmaceuticals used in disease control? How do such chemicals affect human and nonhuman life? What concerns do they raise and what is the evidence of their effects? How could they be detected and measured, and how can populations be protected?

While WP1 also will conduct archival work in the Kenyan Ministry of Health and the Kenya Medical Research Institute, its main approach is ethnographic, starting from observations in the present, in areas of intense IBDC, in institutions that implemented IBDC, and among people – professionals and local residents - that were and are affected by it. Conversations and interviews will elicit memories of insecticide deployment and its intended and unintended effects, and explore local debates, among citizens and experts, about links between IBDC and cancer. As an innovative, engaged ethnographic method, WP1.1 will pursue collaborations with toxicologists in Kenya and Norway, students from Maseno University, and citizens, exploring local possibilities (and their limits) to document and measure chemical residuals in sediment and biota, and assess their effects (e.g. by analysing sediment cores, or documenting insect or bird life in the areas of previous IBDC). This experimental ethnographic approach, involving local and Norwegian scientific institutions and ‘citizen science’, may yield actual toxicological findings. Primarily, however, it creates a space for collaboration with affected communities and debates, about the past, about toxicity and health, the challenge of traceability, the limits of toxicological knowledge, and options for remedial action.

DDT versus malaria : a successful experiment in malaria control by the Kenya Medical Department. Wellcome Collection. In copyright