Under the auspices of the Anthropos and the Material project, we are delighted to invite to an international workshop at Lysebu Hotel, November 10-12, 2014 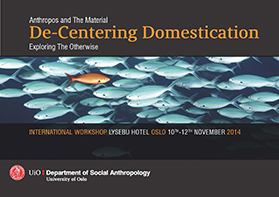 If anthropology is to operate as a ‘permanent decolonialization of thought’ (Viveiros de Castro), then it should involve a constant questioning of narratives we live by. Domestication can function as one such narrative which has sustained, justified and made legible particular historical trajectories and biosocial relations that are now hegemonic (sedentary agriculture, private property, coercive husbandry, extraction of natural goods). In anthropology, domestication has similarly been associated with confinement, human mastery and control, as well as hierarchical and classificatory distinctions separating human and animal, nature and culture. And yet, ethnographic as well as archeological accounts of biosocial entanglements and of human-animal relations repeatedly indicate that our foundational stories could have been told differently.

This workshop summons to rethink, and to de-center, conventional approaches to domestication. We ask how conventional narratives sustain biosocial worlds, but also how they can be challenged ethnographically. In recent years, new concepts have been introduced to describe what goes on in human-animal entanglements: “symbiogenesis”, “becoming with”, “enmeshment”, “intra-action vs. inter-action” “humanimal” and “biosociality” are but a few examples. This conference invites participants to see what occurs when new concepts, including those that emerge from our ethnographies, are mobilized to capture human and other-than-human relations. What are some other ways in which humans, plants, animals or microorganisms cohabit, or feed off each other, and what are their implications for our understanding of what domestication might be? How can we bring attention to practices of domestication on the margins, to biosocial entanglements that are not habitually associated with the Domus or with agriculture and husbandry as such? How can we make the messiness of human lives and human-animal relations inform, engage and destabilise the grand narratives of evolution, civilization and human conquest?

We seek papers that challenge domestication from a broad variety of ethnographic, as well as theoretical vantage points. Specifically, we invite papers that explore domestication on the margins, involving for example marine life, Arctic subsistence, insects, unwanted or accidental co-existence, but also the animals we love and those we eat on a small or large scale. We encourage participants to reflect on how domestication stories and practices involve different makings of time, space and place. Stories may involve ever-increasing human control, or species drifting in and out of engagement with each other. Domestication could involve control, or it could be based upon entirely other kinds of co-existence which help us think more deeply about the question: How might domestication be imagined otherwise?

We intend to produce a co-edited volume after the workshop, and will therefore invite participants to pre-circulate their papers prior to the workshop. Discussant roles will be allocated by the convenors. We also welcome participants who do not plan to present a paper.

Department of Social Anthropology, University of Oslo
E-mail this page