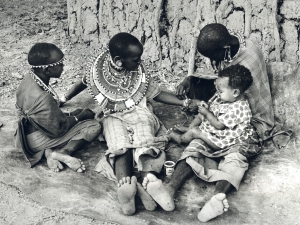 The concern with the ‘natural world’ is paralleled by what is referred to as a ‘turn to the material’ in anthropology and related disciplines (Damsholt and Simonsen 2009). A turn to the material implies a renewed focus on processes whereby forms acquire stability over time. It involves a notion of the material as something which may be ‘mobilised, translated, stabilised, connected or folded in networks – without the underlying presence of a sovereign creator or an acting subject’ (Damsholt and Simonsen 2009:15). Also referred to as the ‘performative turn’, this move engages an attention to practice and implies a shift from a sole focus on meaning and interpretation, to a concern with how entities are enacted or come into being (Abram and Lien 2011, Bennett 2010, Damsholt and Simonsen 2009, Hastrup 2011, Helmreich 2009, Henare, Holbraad, and Wastell 2007, Larsen 2011). This involves, in turn, an ethnographic attention to the ways in which specific practices, situated in time and space, are generative of specific realities. Inspired both by science and technology studies (cf. Law 2007, Mol 2002) and concerns in anthropology about the problematic nature of dichotomies such as subject-object and nature-culture (e.g. Descola and Pálsson 1996, Escobar 2008, Strathern 1999), this turn to the material and to performativity has paved the way for reconceptualizing the role of theory and analysis as ‘generative of objects in the world.’ In the words of Frida Hastrup, anthropological knowledge-making then, is a truly lateral endeavour, in which ‘one world is not a version of another, but form part of a shared world continuously under construction, in which givens and entities have to be created as such’ (Hastrup 2011:438).

One other inspiration for this project is the post-colonial critique. Similarly to the material and performative turn in anthropology, this critique has served to destabilize hegemonic Western ordering of the human and its surroundings, although still retaining that unequal relationships in the world are a part of the colonial legacy. By engaging a variety of different ontologies, not as objects of study, but rather as propositions of what it means to be human, postcolonial scholars have brought about a rethinking of the ontological premises inherent in fundamental dichotomies of human-animal, nature-culture, and subject-object.

A turn to the material

A turn to the material is, of course, not a new phenomenon. Marxist inspired materialist critiques of the 1960’s and 1970’s took issue with imperialism and economic exploitation, often with a focus on political struggles and social change. Materialism privileged economic form (modes of production), productive processes and theories of value, but without sufficient acknowledgement of multiple realities and perhaps also at the expense of processes by which the real comes into being. Actornetwork oriented approaches have shed light on the latter, but have been criticized for paying insufficient attention to historical dimensions and the systematic implications of political and socioeconomic inequalities. A renewed anthropological focus on the material offers the possibility of combining some of the insights from Marxist materialist critiques (e.g. Caldeira 2000, Comaroff and Comaroff 2001, Ong 1987, Ong and Chen 2010, Taussig 1996, 1997, 1999) with perspectives from the performative turn, thus remaining attentive both to the historical and political dimensions of practices and to ontological multiplicity and how reality becomes real through the material.

Such perspectives have inspired a rethinking of the relationships between humans and their environment broadly understood and consequently of the premises of the anthropological endeavour, and we wish to build on, as well as to further develop that trajectory. We emphasize also that the term ‘material’ can refer to many ‘things’ – commodities, money, technologies, architecture, landscapes, bodies and so on – and can thus be seen as a process whereby entities emerge. This implies that a focus on anthropos and the material requires attention, in specific sites, to the temporalities as well as spatial orderings that are involved as various entities come into being. It follows from this that we must locate material perspectives in a historical trajectory which includes historical developments in general as well as the particular historical shifts within the discipline of anthropology, but also question how the anthropos and the material are temporally and spatially inscribed in ways that are generative of particular historical and global orderings (e.g. us vs. them, now vs. then).

Anthropological perspectives that foreground the material may represent a particular challenge to social anthropology, at least with regard to the classical conception reflected in the discipline’s credo of grasping ‘the native’s point of view.’ Nevertheless, there is no doubt that recent analytical endeavours that seek to transcend entrenched dichotomies such as nature-culture or subject-object are paramount. This applies to analyses that seek to locate the place of human agency or to redistribute agency in a world whose future viability is critically assessed (ecologically, economically and politically) as well as for approaches that aim at reworking epistemological and ontological groundings of what the social and natural are about. In this direction, performative perspectives hold much promise, not least in relation to rethinking the relationships between human and non-humans, subject and object, society and nature, through the practices and relations that generate such oppositions in the first place. However, decentring human agency as an object of analysis does not preclude a discussion of the notion of ‘human.’ On the contrary, we wish to contribute toward anthropological theorizing by framing our research in ways that give room to questions with regard to the constitution of the human as well as notions of and crafting of personhood. While drawing on seminal works such as Carrithers, Collins and Lukes (1992) and Dumont (1988) this effort will also require a systematic examination of the ontological premises regarding the conceptual divide between humans and their environment and their relation to the anthropological epistemological endeavour.

This project, then, seeks to explore changing enactments, conceptualizations (in the social sciences and empirically) and figurations (empirically) of the anthropos. We will do that particularly through an approach that takes into account the material aspects of existence, i.e. approaching humans as always and already constituting and constituted by the material environment broadly defined. In order to do so, we delineate three research areas: domestication practices, economic practices and ritual practices. These are areas that capture, in our opinion, different aspects of the more overriding concerns described above. We envision that human-material enmeshments occur in different scales as well as temporal and spatial forms in these different areas, and in order to address these multiple enmeshments we will question within each of these areas how 1) values, 2) technologies, and 3) standardisations (regulations/legislations and basically all spatial and temporal orderings) have an impact on and/or are embedded in the historically evolving relationships between the anthropos and the material. In this way, we establish nodes of comparison between the three proposed sets of practices and also aim to transcend conventional divides between nature and culture, market and society, and the symbolic and the material.