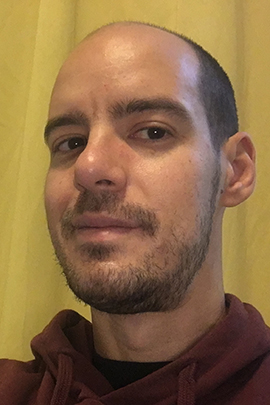 Giorgos Poulimenakos holds a bachelor's degree in Social Anthropology from Panteion Univeristy of Social and Political sciences, Athens, Greece (2011) and a Master's degree in Anthropology of development and social transformation from the University of Sussex, UK (2014). His master's thesis was on the reconfiguration of urban spatialities in Athens in relation to the formation and reformation of political subjectivities during the Greek crisis. For this thesis he conducted fieldwork in an anarchist squatted social center in Athens, in the context of an intensification of the Greek state's repressive strategy against squats.He has also conducted fieldwork in south Peloponnese, Greece, as part of PRECARIAT, a research project that studied labour market deregulation in Greece during the socioeconomic crisis. This project was based on the Faculty of Social Science at Vrije University of Amsterdam.

Giorgos is currently part of the ERC-funded  project PORTS, based in the department of social anthropology of the University of Oslo. PORTS consists of a parallel study of four  ports around the world that constitute significant nodes in the global supply chain  and therefore play a pivotal role in sustaining, producing and reproducing our everyday sociomaterial experience of the contemporary world. Pusan (South Korea), Singapure, Rotterdam (the Netherlands) and Piraeus (Greece).

Giorgos will be conducting fieldwork in Piraeus, Greece, an emerging port in the global antagonism due to its strategic geographical location (the first port after the Suez canal). The port of Piraeus was privatized and sold to Chinese interests under the conjucnture of the Greek economic crisis, as part of the requirements posed by the structural adjustment program agreed with the EU, the ECB and the IMF. His  research will focus on how imaginaries, strategies and disciplines that produce the port as a transient, porus space detached from its local context  in the process of the realisation of capital circulation clashes with local understandings of labour, labour identities as well as local histories and affective connections to space/place(topos). The overarching goal of this research is to contribute to the understanding of the complex aspects of globalization and the contradictive relations between openness and enclosure, relationalities and enclaves demanded for the uninterupted flow of the global economy and the extraction of surplus values in the field of the circulation of commodities.

Poulimenakos, G. and Dalakoglou, D. (2018) “Hetero-Utopias: Squatting and spatial materialities of resistance in Athens at times of crisis”. In Dalakoglou, D. and Aggelopoulos, G.(Editors) Critical Times in Greece: Anthropological Engagements with the Crisis New York: Routledge.

Poulimenakos, G., Dalakoglou, D. ,Pavlopoulos D., Alexandridis, A, Della Puppa, A. (2021) "The Greek Crisis Ends here Tonight”: An Ethnographic Examination of Labor Market Deregulation in Greece beyond the State of Exception. In press, “Journal of Labour and Society”.