Arnd Schneider talks in Genua (Italy) about the public role of art and anthropology.

Arnd Schneider was invited by the Dialoghi d’Arte Foundation to Genua (Palazzo Ducale, 2 May 2019) to talk about the public role of art and anthropology. 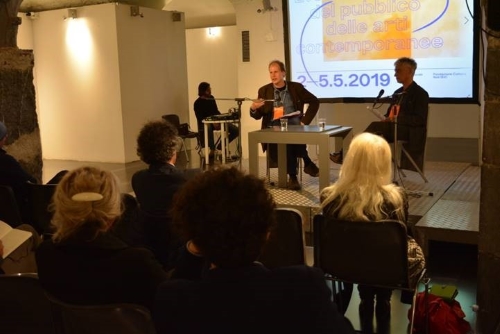 In his dialogue “Transformations of the public: the reactions of the public according to anthropology” with anthropologist Ivan Bargna (Milano – Bicocca University), Schneider explored how both anthropology and art had changed over the last decades. Anthropology has no more discreet, and isolated ‘objects’ of research as in the classical mise-en-scène of Malinowskian fieldwork, and art has become much more than the single ‘art work’. Instead, in both fields we can speak of relations between people (artists, the public), processes and art works which together constitute a ‘field’ that is open to critical intervention and participation. Such critical interventions are especially relevant for the museum and heritage context; for instance, in a project that Schneider carried out with artist Leone Contini (Bel Suol d’Amore – The scattered Colonial Body) where they investigated the colonial collections of the L. Pigorini Ethnographic Museum (Museum of Civilizations) in Rome, and which was part of the TRACES project funded by the EU's Horizon 2020 programme.