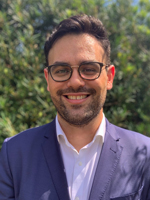 Dr. Rubén Rodríguez-Cano is a current Postdoc in the Psychosocial Determinants group at the PROMENTA Research Center (University of Oslo).

He earned his Ph.D. in Clinical Psychology at the University of Santiago de Compostela (Spain). Before joining PROMENTA, he was granted with the CPRIT Postdoctoral Fellowship at the University of Texas MD Anderson Cancer Center (Houston, TX. USA), where he investigated the effect of health risk factors, such as smoking or alcohol drinking, on smoking cessation context among cancer patients.

Ruben has clinical and research experience in substance abuse disorders and other mental health disorders since 2011. Previously, he also got trained expertise in children development and psychopathology at the Prevention and Promotion Service of Child Development and Early Intervention (SEPRODIAT; University of Murcia, Spain).

Currently, Ruben's primary research interests focus on elucidating and attenuating health disparities among vulnerable populations by examining the longitudinal interplay between substance use, mental health and psychosocial vulnerabilities. Within this model, Ruben is particularly interested in the efficacy of personalized interventions that help to reduce health risk behaviors (i.e., addictive behaviors) and their co-occurring psychopathology among socioeconomic marginalized groups of population.