Damaging your body may be a way to control negative emotions. New research from UiO shows that young people also use self-harm to communicate and share difficult feelings, which they are unable to express in words. 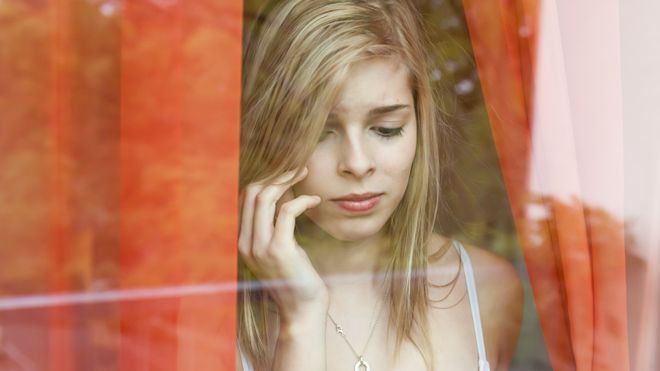 Around 10 per cent of today's youth - mostly girls - has experienced self-harm, either by cutting, slashing or hitting themselves. But there are large individual differences within the group and many causes of doing so. Photo illustration: © Mike Schröder / Argus / Samfoto / Scanpix

Most research on self-harm has been based on the researcher's description of adult patients. Psychologist Line Indrevoll Stänicke at the University of Oslo wanted to bring out the youth's own explanations to get a better understanding of the young patients' ailments.

"From the studies of adults we know that self-harm may be a form of communication. Our new findings, from a systematic review of studies, show that young people believe self-harm to express feelings they think they must hide. To hurt yourself becomes a way of sharing difficult emotions they believe no words can describe", says Stänicke.

The youngsters in the study describe an overwhelming pressure and intense frustration, which they think they must escape, and which they can’t show others. They are afraid these emotions will be problematic for others to cope with.

"When adolescents believe the society don’t want to hear of difficult feelings or experiences, they may seek other channels to express them, such as their own body, says the researcher."

Conflict between processing and care

Stänicke finds that youths relate self-harm to current dilemmas in their everyday lives with their closest relations.

"We should understand self-harm as a way of resolving conflicts between a need of processing and expressing emotional experiences and a craving for care. They may surpress difficult emotions to ensure that they are cared for."

Young people are often in the age of 12-13 when they begin with self-harm, a period of major changes in body, emotions and social relationships. It might be vital to view self-harm in this context.

"Everything they faces in this period of life can create big challenges for the individual and the family. For some youngsters, impulsiveness, border testing and risk behavior may be a way to deal with their experiences. Young self-harmers need support and care, and to be seen and heard. In addition, they have to realize they need help and what is the best help for them."

Stänicke explains that serious self-harm may be associated with mental illness such as depression, anxiety, substance abuse, eating disorders and personality disorder. Self-harmers have a higher risk of committing suicide, an important reason to pay particular attention to this group.

"It is important to grasp this behavior and learn how we can help. When approximately 10 percent of the adolescents - mostly girls - are experienced in hurting themselves by cutting, scratching or hitting themselves, it is natural that there are large individual differences in this group. Some struggle with mental or relational difficulties in periods of life, but manage to quit self-harming on their own. For others, self-injury can be repetitive and comprehensive, as part of or in addition to a mental disorder. The latter group will need intensive treatment", the researcher says.

Grown-ups should open up

She emphasizes that researchers already have knowledge of treatment methods that are effective and adapted to youths, but points out that there is no treatment method that helps everyone.

"I have interviewed young people about their own experience of self-harming and I asked them what about the treatment that was most useful. I have also investigated if there are some important differences between the answers. This knowledge is principal to those meeting the youngsters in a way that the patients feel understood and accepted. If self-harm is a way of expressing and sharing difficult experiences, it's crucial that the adults create opportunities for - and are not afraid of - addressing the problems that may be the cause of self-harming behavior."

Among young people in treatment, there will be some who wants to quit hurting themselves, while others may lack motivation because they feel that they have found a "final solution" to everything that feels difficult, according to Stänicke.

"By exploring the difficulties of self-harm, they may become more motivated to find other ways to endure and master what feels so overwhelming, frustrating and incomprehensible to them."

Stänicke points out how young people interpret actions such as self-harm, and words such as depression, anxiety and low self-esteem. Such actions and words may have an expanded and changed meaning for youths today compared to previous generations.

"Today’s youth have access to all the information in the world about mental problems and disorders. They express and use words differently from psychologists. For example, if a young girl says she feels depressed, it does not necessarily mean that she suffers from depression in clinical terms."

The extent of self-harm among teenagers increases, especially among young girls. The researcher stresses that these actions must be viewed in the light of cultural opportunities and limitations to express experiences, thoughts and feelings.

There are many known risk factors for self-harm, including mental illness, substance abuse and alcohol abuse, low socioeconomic status, sexual orientation, as well as negative experiences such as trauma, sexual abuse, violence and bullying, according to Stänicke.

However, the risk factors are quite general and could be attached to disparate ailments and disorders. Consequently, it’s essential to obtain knowledge about a young person’s severe experiences; abuse, difficult family relationships or bullying, or if they have friends who are self-harmers.

"I study the connection between self-harm and individual life stories, their current situation and psychological conditions. In the interviews, I investigate young people's experience of the way in and out of self-harm. What made them start and what helped them quit? We also collect data on diagnosis, methods and frequency of self-harm, as well as the ability to mentalize. We are looking for important individual differences in the development of personality and self-image. We hope to be able to group self-harmers into subgroups and hence adjust the treatment more individually", says Stänicke.

By Gro Strømsheim
E-mail this page