Boosting the brain can lead to cognitive overload

Electrical stimulation of the brain´s cells whilst solving challenging tasks can lead to mental overload. 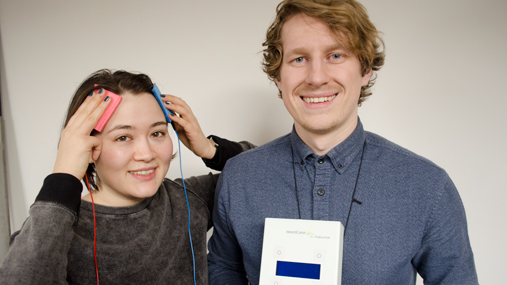 3 master students at the University of Oslo´s Psychology Institute wanted to test whether a treatment that sends a very weak electrical current through the skull to the outer layers of the brain, so-called transcranial direct current stimulation (tDCS), can actually make us smarter.

The young scientists’ startling result has been recently published in the renowned international journal Neuropsychologia.

The students divided the task they gave to participants into three levels – simple, medium and difficult. They found no effect of stimulation when participants performed the simple and medium tasks, yet they found a large negative effect on the most difficult tasks.

– tDCS had a disruptive effect only on the most difficult tasks that demanded a lot of concentration, says James Roe, one of the lead researchers behind the study.

The master students wanted to explore whether the level of difficulty of a mental task could be a factor that predicts the direction of effects from brain stimulation.

– We saw that participants experienced severe problems concentrating when the task was most difficult and the brain was being stimulated. This was in comparison to perfomance on the same difficulty level when participants only thought they were being stimulated. It was as though tDCS had completely overloaded a brain region crucial to performing the task, as though it crashed it, explains Roe.

– Those that claim that tDCS can increase attention and cognitve ability have maybe not tested the device whilst performing already extremely difficult tasks, adds co-author Mathias Nesheim.

In recent times neuroscientists have been showing increased interest for tDCS. Many claim that the device can, amongst other things, help improve memory, increase self-control and make us more creative. tDCS is already implemented in the rehabilitation of a range of psychiatric and neurological conditions, such as depression, stroke, Alzheimer’s disease, fibromyalgia and tinnitus.

The young researchers acknowledge that tDCS can indeed have a positive impact, and instead point out that their study has shed light on the effects of tDCS when we solve tasks of varying difficulty.

– The tasks the brain is performing whilst receiving electrical stimulation, as well as the brain region being stimulated, are factors that absolutely help determine the effects of stimulation, emphasizes Nesheim.

Warns against daily use

This apparatus that is used to energize brain cells is so cheap and simple that in recent times it has become widely commercially available. tDCS is often sold as a universal brain performance-enhancing device, as well as a promising self-treatment method for both psychological and physical afflictions. As a result, an entire subculture of self-stimulators has emerged in recent years.

The American Air Force has previously tested the implementation of tDCS in the training programmes of drone pilots, and claims to have cut training time in half. The US Army has also tested its use when training military personell. Gamers place tDCS on their heads and play for hours, and students do the same while they read for exams.

Nina Chung Mathiesen, the third student working on the project, admits to having used tDCS, but warns against using it on a daily basis.

– It is pain free and so far there is little evidence for any unpleasant or lasting side-effects, but I would still be careful when it comes to sending daily doses of electricity through one’s brain.