Parts of the brain decline faster from age 30, researchers at the University of Oslo find. These brain changes are accelerated in people with Alzheimer’s disease. 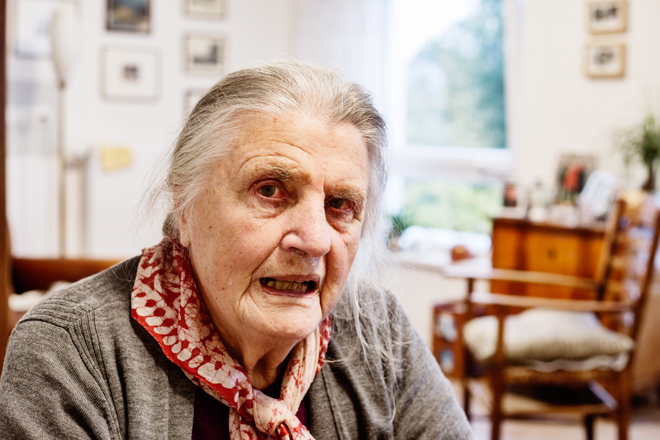 Are we on the verge of understanding the link between normal ageing and brain changes in Alzheimer’s Disease? Here a senior demented woman in her nursing home room in Cologne, Germany. Photo illustration: ImageBROKER/ Scanpix

These new findings, published in Nature Communications, shed new light on our understanding of how the brain ages, and demonstrate a possible link between healthy aging and Alzheimer’s disease.

The researchers were specifically interested in the cerebral cortex because thinning in this part of the brain has been linked to cognitive decline and Alzheimer’s disease. It is the outermost layer of the brain – a thin sheet of “grey matter” – essential for higher-order cognitive functioning such as memory.

The left and right side of the cortex are not equally thick in younger brains – a phenomenon called “cortical asymmetry”. Asymmetry is seemingly a good thing as it allows the brain to function optimally, as the left and right brain are specialized to do slightly different jobs.

As we age, the cortex shrinks and gradually causes cognitive decline, which is a normal part of ageing.

Until now, scientists have thought that the left and right sides of the cortex thin at the same rate, but this study shows that the side of the brain that was thicker at age 20 deteriorates faster.

The research team, which is part of an international consortium of brain researchers called Lifebrain, measured the thickness of all areas of the cortex using brain scans from over 2600 healthy people across Europe and the US, and in an Australian sample with dementia.

The researchers found cortical asymmetry is lost as we age, proving that the two sides of the brain deteriorate at different rates. In the exact same brain regions as in normal aging, they found the left side of the brain shrinks faster in Alzheimer’s disease.

“It’s too early to conclude, but cortical asymmetry could possibly be used as a marker to detect early brain changes in Alzheimer’s Disease, which are thought to occur before cognitive symptoms start to show” says lead author of the study James Roe.

The asymmetry-loss emerged at a similar age in most people (around early 30’s) and continued across the adult lifespan, with accelerated decline around age 60.

“Loss of cortical asymmetry is happening gradually over the lifespan. We saw this with remarkable consistency in all samples”, says Roe.

“The implication is that at least some brain-changes associated with Alzheimer’s disease may play out over extended periods of the lifespan, possibly on the order of decades, and may show high overlap with those occurring gradually in normal aging,” Roe says.

Largest lifespan dataset in the world

The researchers, based at the Centre for Lifespan Changes in Brain and Cognition (LCBC) at the University of Oslo, used a “longitudinal” approach, meaning they were able to analyze brain scans of people at several time points throughout their lives. The study is part of the EU-funded project Lifebrain, a collaboration between many of the largest longitudinal ageing datasets in the world.

Lead author of the study, James Roe, says this is what gives the study such strength:

“The data we have thanks to Lifebrain is a treasure-trove. We were able to measure the thickness of every region of the cortex in over 2600 healthy participants from five countries, up to six times in the same person over time. Many other brain datasets only have one brain scan per person, so they cannot see changes occurring in the same person throughout life. Having follow-up scans of the same people was absolutely key to our study”

The Lifebrain project brings together many of the most comprehensive datasets for looking at changes in the brain across the lifespan, from 0 to 100 years of age. The major goal of the Lifebrain consortium is to ensure a fuller exploitation, harmonization and enrichment of some of the largest longitudinal studies of age differences in brain and cognition in Europe.

This article was also published on the Lifebrain pages.

The paper “Asymmetric thinning of the cerebral cortex across the adult lifespan is accelerated in Alzheimer’s disease” by James M. Roe et al. was published in Nature Communications February 2021.