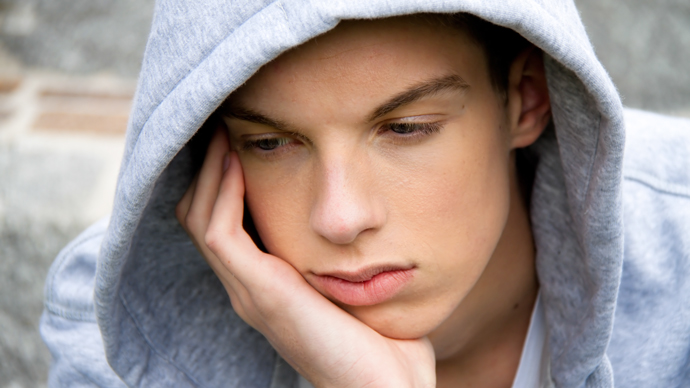 The longitudinal study showed that the participants who reported being very lonely in adolescence, earned less money when they started working. Photo illustration: Colourbox.com

“Even though loneliness is considered a public health problem, we know very little about its effect on young people and young adults”, says Tilmann von Soest, psychology professor at the University of Oslo and researcher at OsloMet.

“The stereotype of a lonely person is still an old lady no one visits.”

Mr. von Soest, a German by origin, and his collaborators, are among the first in the scientific community to identify long-term effects of loneliness in adolescence. Several of the findings, published in the Developmental Psychology Journal, are startling. For instance, that loneliness during youth may harm future income.

– That surprised us. It may be related to the ability to make helpful contacts, but we don’t know, von Soest says.

The study's data material originates from various Norwegian register data linked to the large “Young in Norway” survey - a unique longitudinal study in which the same cohort of 3000 youths is followed into adulthood. The participants were between 13 and 19 years old when the study started in 1992. Today, they are all in their forties. The article measures loneliness up to age of 31 and distinguishes between two types of loneliness: emotional and social.

“It may be easier for a man to admit he wants to extend his social network, than to acknowledge emotional loneliness. Women usually communicate more openly about their feelings and may not experience the same taboo,” he says.

The article's main findings show how social loneliness gradually declines and almost disappears when the participants are in their mid-twenties. For emotional loneliness, it’s different: It increases by a little until the end of the twenties, when it stabilizes.

“Adolescence and young adulthood are filled with many transitions where we may be extra vulnerable to loneliness. You are expanding your network of contacts during these years, yet you may feel you don't really know anyone,” he says, and gives an example:

“Say you're moving to a new city to study. You leave your old friends and network behind, while it takes time to create new close relationships in a new environment. That may be challenging.”

The professor, who specializes in personality psychology, emphasizes that everyone feels lonely from time to time, which is not dangerous in itself. However, the persistent feeling of loneliness, should concern us as a society. Studies from other countries have previously shown how adolescents struggling with loneliness are more likely to receive disability benefits later in life, something von Soest's research also confirms: They are more predisposed for mental and physical illness and have a higher mortality rate.

“Humans are social. Therefore, the feeling of being left out is very powerful. It is associated with danger, something we to a large extent try to avoid. Having just one friend you can confide in is very helpful,” von Soest says, knowing this is not the case for everyone growing up.

Luckily, having no close friends during middle and secondary school does not mean you will live without good friends for the rest of your life.

“We see that young people without friends are much lonelier there and then, but the difference in loneliness between these and others decreases in young adulthood. That’s very encouraging. A problematic phase without close relationships must not affect the rest of your life.”

Unsurprisingly, social personal traits such as agency and communion are predictors of low levels of loneliness. Living with both your biological parents until 18, is another.

“Growing older, parental contact is more and more replaced with peers. Still, our parents are significant. Having a good relationship with your parents has a long-term effect on loneliness.”

“Because we learn how to interact with others through the relationship we have to our parents?”

“Yes, in addition, parents continue to have an essential social support function to us,” von Soest says.

He and his fellow researchers did find another helping factor within the family as well: siblings.

“Young people with siblings are a little less lonely, but this effect decreases when they get older and does not return until the end of their twenties. Then siblings can find each other again after years of separation. Having people around who have known you all your life and on whom you can rely, is a strength.”

“We are in the middle of a pandemic and live more isolated than ever. In light of your findings, what consequences do you fear?”

“I think we should be particularly aware of young people in transition phases, such as first-year students,” Tilmann von Zoest says.

“Their lives have been significantly reduced; it can be especially hard for those initially vulnerable.”

The Social Gradient in Mental Health