Instead of shifting the responsibility on to the refugees, we need to treat them as fellow citizens and include them in our everyday lives, according to researcher. 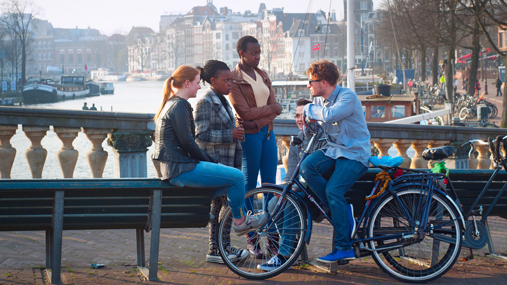 A common group identity wipes out the division between "us" and "them" and determines how likely we are to invest Our own resources on integration efforts. Photo illustration: Colourbox.com

Refugees from Syria and other conflict areas stream into Norway and Europe. How to welcome them is a widely debated question.

– Instead of leaving the responsibility to the refugees themselves, we need to treat them as fellow citizens and include them in our everyday lives, said scientist Jonas R. Kunst, lead author of the study.

It’s easier said than done. There are more than 800.000 first- or second-generation immigrants in Norway, but the study results imply that many believe to have little in common with them.

“The Norwegian society has changed enormously over the last fifty years by becoming much more multicultural. The way we differ between “us” and “them” hasn’t changed as fast”, said Kunst.

This affects integration. In the study, participants who endorsed a common group identity were less racist toward immigrants and more likely to spend their own time and money to help immigrants adapt to their new homes. The science group conducted five surveys and experiments in Norway and the U.S. 182 people participated in the Norwegian survey.

1 out of 4 had no common group identity

Further studies are needed to know whether these numbers are representative. However, the results indicate that Norwegians feel less of a common group identity with immigrants than white Americans do.

In both countries, scientists saw a clear connection between the sense of a common group identity and support of integration efforts. Those who regarded immigrants as part of their own group were more in favour of initiatives like economic support to immigrants, adjustment of laws and regulations to make immigrants feel more integrated, and affirmative action of immigrants in political parties.

“The sense of a common group identity was very important. It explained 50 percent of peoples responses, a surprisingly high number”, Kunst said and explained that several factors can influence the will to support integration, for instance social-economic status and political orientation.

According to Kunst, traditional racist attitudes, like believing that ethnical minorities or immigrants are less intelligent, have almost disappeared in Norway. It has, however, been replaced by a “modern racism”.

“The modern racism focuses on whether immigrants deserve the same resources and status as others. The higher sense of common group identity, the more people believe immigrants deserve. This in turn leads to a support of integration efforts,” Kunst said.

Willing to spend time and money

“Immigration is a global phenomenon that is transforming societies around the world,” Kunst said.

“While immigrants need to integrate into a new society, the native citizens also must make some proactive efforts to accommodate immigrants. A common national identity that doesn't make “us versus them” distinctions can reduce racism toward immigrants and help a multicultural society succeed. ”

Kunst believed that the historical differences between Norway and the U.S. may explain the different findings in the two countries.

“Almost all U.S. residents have ancestors who immigrated during the last centuries. This is likely to influence their way of welcoming new immigrants”, he said.

He also believed that Norwegians attitudes are likely to change with time, and that the changes will happen quicker if opinion leaders and mass media are aware of their use of expressions.

“Often we do not need mass media to specify a person’s ethnicity. We also see that some political parties have anti-immigration campaigns where they refer to immigrants as a group that is not loyal and as strangers that will exploit the system. They don’t mention that in order to feel loyalty, a person also needs to feel included in the society”, Kunst said.

Jonas R. Kunst and Lotte Thomsen conducted the study in co-operation with scientists at the University of Bergen and Queen’s University in Canada. It was published online in Personality and Social Psychology Bulletin.