UiO Faculty of Social Sciences Department of Psychology
Main navigation
Back to uio.no
Sub navigation Menu
About the Department > News > Consolidator Grant to Kristine Walhovd
Norwegian version of this page

Professor receives second prestigious grant from the EU, joining the ranks of only five researchers in Norway to have achieved this feat. 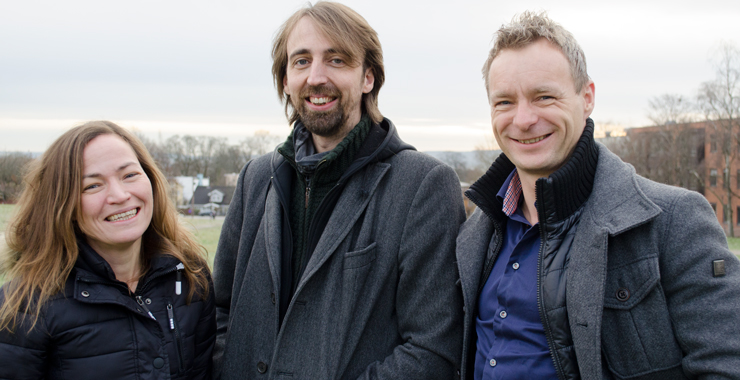 Professor Kristine Beate Walhovd at the Center for Lifespan Changes in Brain and Cognition (LCBC) will receive just over 19 million NOK over five years from the European Research Council (ERC). This comes as part of the distinguished Consolidator Grant scheme, awarded to strengthen the international standing of excellent research teams and to allow researchers to continue to develop an outstanding career in science.

She and her husband, Anders Fjell, are two of six Norwegian researchers who have received both the Starting Grant and the Consolidator Grant from the ERC.

This means that both the Department of Psychology and the research group the couple leads within it — LCBC — accounts for one third of two of the major ERC grants awarded in Norway.

Walhovd’s newly funded project concerns how factors such as those that occur early in life can impact upon changes in brain and cognition in later life. The title of the project is: Set to change: early life factors restricting and promoting neurocognitive plasticity through life.

– How your brain functioned when you were young predicts how your brain will function over decades. I think this is interesting because people experience major changes in brain and cognition throughout life, Walhovd says.

The goal is to test how both inheritance and early environmental factors work together to regulate neurocognitive plasticity: the apparent changes occurring in brain and cognition as a result of experience over a lifetime.

– We know that there are major individual differences in the changes that occur as we age, but also in our ability to, for example, benefit from training programs. Currently, we do not know why this is, she adds.

– Our hypothesis is that neurocognitive plasticity in adulthood is partly determined very early in life. The influence of genetics and how inheritance factors will subsequently interact with the environment has already begun in the mother’s womb, she continues.

To show how early this interaction between inheritance and the environment is taking place, the researchers have developed an innovative design for the project.

They will test differences in neurocognitive plasticity in twins of different ages, subject to different conditions.

– We know that certain aspects pertaining to brain and cognition are partly inheritable, but we know relatively less about how genetics and environment interact in determining the benefits we reap through training the brain and cognitive functions.

– To shed light on this, it is necessary to compare how the brains and cognitive functions of individuals with differing degrees of genetic and environmental similarity will respond to targeted training, says Walhovd.

Before and after training the researchers will take MRI images of the brain and give participants a variety of cognitive tests, some in a virtual reality (VR) environment.

– Our memory relies on many of the same mechanisms that enable us to navigate around the world," says Walhovd.

Some claim that part of the memory decline we see in elderly people is related to the fact that they have a tendency to move less, in turn leading to less of a demand to orientate oneself in ones surroundings. Therefore it makes sense to train memory in a laboratory setting through which people can move and navigate a large-scale environment.

This is why Walhovd has developed a brand new method. Together with other colleagues in LCBC, she has piloted an experimental design where participants cycle through a VR environment, while finding places and remembering things along the way.

– It's very fun, but also challenging. We are trying to develop the method further, she says.

One such environmental factor Walhovd is interested in testing in the new project relates to the conditions in the mother’s womb during pregnancy.

– People vary a lot in their birth weight, and we have seen that this is partly related to brain development in later life, but our studies have so far been unable to say to what extent this is related to genetic and environmental conditions. Different birth weights in identical twins enable us to isolate environmental impact and genetic influence, she emphasizes.

This is the second time Walhovd has received a grant from the EU. Currently she is in the final phase of the project for which she received the Starting Grant from 2013-2018.

– All the support I and we have received from various places, including the Norwegian Research Council, has been crucial in order to realize this project.

– This ERC grant is not something that you seek as part of a single or isolated project. Even though it is a personal allocation, I am totally dependent on the infrastructure we've built, and continue to build, with funds from many different sources, she says.

– Therefore, I would like to highlight all the fantastic help I have received from colleagues at PSI and other faculties at UiO in the work on the project and the application. Working with the ERC Consolidator Grant application has been very educational. Now I'm really looking forward to where we can go from here, and I am hoping for a lot of plasticity, she laughs.

As the head of the Institute of Psychology, Pål Kraft is proud of the success of Kristine Walhovd, Anders Fjell and the LCBC group.

– Kristine and Anders have established themselves as among the top researchers in the world within lifespan brain research.

– It's amazing what they've achieved. They’re pushing the research frontiers and we are thrilled to have them here at PSI, praises Kraft.

– A part of these funds also benefits the rest of the department, and comes in a time of tightened budgets after the efficiency cuts from the Ministry of Education and Research, he adds.

Just last year Kristine Walhovd and colleagues scooped a huge influx of funding from the EU's largest research program — Horizon 2020 — which has now become the LifeBrain project, as well as INTPART funds from the Norwegian Research Council.

Her husband Anders Fjell is not doing badly either, having secured both the ERC Consolidator Grant, FRIPRO funds from the Norwegian Research Council, and continued funding from the National Association for Public Health last year.

In total, we are talking about 124 million NOK.

And if this wasn’t enough, the Center for Lifespan Changes in Brain and Cognition (LCBC) has received Toppforsk Funding from the Norwegian Research Council, and has been designated as a world-leading research environment by the Ministry of Education and Research.

The ERC recently announced the 329 top researchers in Europe that have been awarded the Consolidator Grant. Interest for these funding programs is huge. There were over 2,500 applicants.

This year, five Norwegian researchers made it through: two at the University of Oslo (UiO) and three from the University of Bergen. Hans Kristian Eriksen of the Department of Theoretical Astrophysics is the other researcher at UiO to receive the award this year. He also received ERC funds for the second time.

By comparison, our neighbors in Sweden, Finland and Denmark boast respectively 15, 12 and 10 winners of this year's ERC Consolidator Grant.