French countdown to election year (2): fracture on the moderate right

Dualism used to prevail on the moderate right wing of French politics. There were two independent groupings: gaullists and centrists. Nicolas Sarkozy masterminded their conflation in 2007. Then the bulk of centrist politicians, including most centrist deputies in the National Assembly, rallied to the president’s party. Will they remain there? 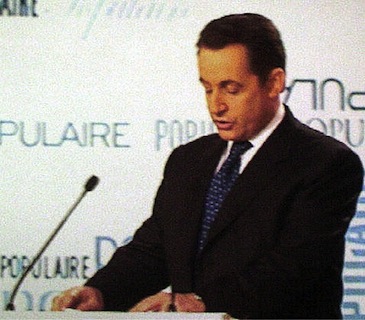 Gaullism is the ideological legacy of Charles de Gaulle. In his own manner, he personfied the bonapartist tradition in France. His main preoccupation was state-building, which he saw as an unceasing challenge and a precarious achievement. (He famously alluded to the problem of carving a cohesive society out of a country with two hundred and forty six varieties of cheese.) His means were administrative centralization, economic planning and pronounced, personal leadership.

A major event in the history of gaullism was the formation of the neo-gaullist party Rassemblement pour la République (RPR), set up by Jacques Chirac in 1976. Another pivotal episode was Chirac’s conversion of RPR into Union pour la majorité présidentielle, soon to be renamed Union pour un Mouvement Populaire (UMP), in 2002. It was done with the ambition of building a party that had room for both gaullists and centrists.

Centrism In France branches out in several directions. One of them is economic liberalism, associated with the orleanist tradition. (It has its name after the 19thcentury king Louis Philippe, who embodied the values of the bourgouasie rather than the aristocracy that traditionally stood behind monarchy.) Another branch is social catholicism, which is wedded to welfare policy and decentralization of political power. This is the French brand of Christian democracy – neither as prominent nor as conservative as the its German or Italian counterpart.

Centrists have always been spread among several small parties. For many years, many of them cooperated under the wings of Union pour la Démocratie Francaise (UDF) – an electoral alliance created in 1974 by then-president Valéry Giscard d’Estaing. UDF collaped in 2007, when Nicolas Sarkozy oversaw the entry of most adherents into UMP. This provided him with a very comfortable majority in the National Assembly, and it virtually extinguished centrism as an independent political force.

Five years later, this process may be set in reverse. The explanation is twofold. First, Sarkozy is so unpopular that many political actors on the right want to dissociate themselves from him for opportunistic reasons. Secondly, he is drifting towards political positions that many centrists reject on ideological or pragmatic grounds.

The fracture that seems about to open has been set in high relief by the question of how to deal with the extreme right. Front national (FN) is doing well at the moment. It appears to have stolen quite a few voters from the moderate right in the recent cantonal election – that is, the election of representatives to regional councils - which took place last month.

As is the rule in France, election goes on in two rounds. If no candidate captures an absolute majority in the first round, the best placed candidates confront each other in the second round. The norm has long been that (whenever necessary) the left and the moderate right strike an informal deal to pool votes in the second round, so as to prevent candidates for FN from winning. This time, however, Sarkozy refused to advice first round UMP voters to favour leftist parties in run-offs between the left and FN. This was something of a sensation and unacceptable in the eyes of most centrists (as well as a good many people in Sarkozy’s own camp).

Moreover, Sarkozy and people who are close to him in UMP have been using language and staking out policies that echoe emblematic concerns of FN – notably the concern about a growing immigrant population and the visible presence of Islam in society. Many centrists squirm at UMP’s encroachment on long forbidden political territory.

Last week, the leader of Parti radical (PR), Jean-Louis Borloo, withdrew from UMP and called on centrists to join him in creating an alternative. He also hinted that he may run for president in 2012. Borloo was minister of the environment and an important ally of Sarkozy until recently, when he was passed over for prime minister and decided to leave the goverment. He has enough notority and sufficient political skill to be able to lead a centrist rebellion, but it remains to be seen if his initiative succeeds. It obviously depends on whether other centrists in UMP follow suit, and also on the reaction of Francois Bayrou, a veteran centrist politicians, who did not join the UMP in 2007. His small party, Mouvement démocrate (MoDem), has since been the only remant of independent centrism. If Borloo is joined by the rest of his party and teams up with Bayrou, the dualism on the moderate right willl be restored.