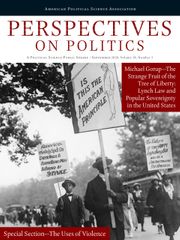 We describe and analyze patterns in the geographical focus of political science research across more than a century. Using a new database of titles and abstracts from 27,690 publications in eight major political science journals from their inception, we demonstrate that, historically, political scientists concentrated their studies on a limited number of countries situated in North America and Western Europe. While a strong focus on Western countries remains today, we detail how this picture has changed somewhat over recent decades, with political science research becoming increasingly “globalized.” Still, several countries have received almost no attention, and geographical citation patterns differ by subfield. For example, we find indications of a greater focus on the United States and large Western European countries in international relations than in comparative politics publications. We also analyze several correlates of a country being the focus of political science research, including the country’s predominant languages, income, population size, democracy level, and conflict experience, and show systematic variation in the geographical focus of research. This unequal focus, we argue, has important implications regarding the applicability of extant descriptive and causal claims, as well as the development of theories in political science.