Who Revolts? Empirically Revisiting the Social Origins of Democracy 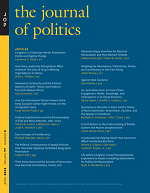 Published in The Journal of Politics, online 30 August 2019.

Several prominent accounts suggest that democratic transitions are more likely to take place when opposition to the incumbent regime is led by certain social groups. We further develop the argument that opposition movements dominated by industrial workers or the urban middle classes have both the requisite motivation and capacity to bring about democratization. To systematically test this argument, we collect new data on the social composition of antiregime opposition movements, globally from 1900 to 2006. We find that movements dominated by one of these urban groups more often result in democracy, both when compared to other movements and to situations without organized mass opposition. As expected, the relationship is stronger in urban than rural societies, and in more recent decades. When further differentiating the groups and accounting for plausible alternative explanations, the relationship between industrial worker campaigns and democratization is very robust, whereas the evidence is mixed for middle-class campaigns.

Full text for subscribers at The University of Chicago Press.